The Russians Are Coming. 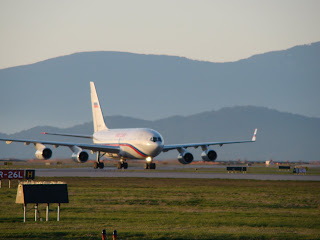 Well, actually, they've already left. But they were here.

One of the cool things that happened during the Olympics was the arrival of quite a few Russian built aircraft. We very rarely see some of these birds in North America, let alone Vancouver. 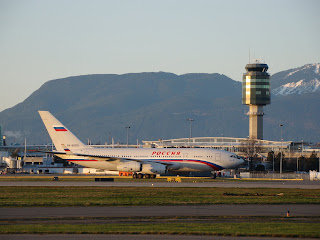 This is the Ilyushin 96, operated by the Russian State Transport company and came with some Russian dignitaries for the games. Rumours had it that Putin was on board, but I'm not sure about that. On further investigation, it looks like it was Medvedev instead. 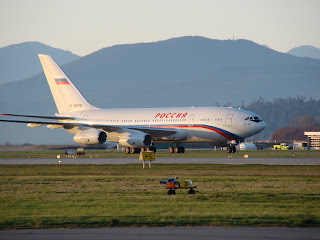 They did have an advance team come in with an Ilyushin 76 ( a large russian freighter aircraft ) that had motorcade and security gear, but it was in and out so quickly I didn't have a chance to get over and take any pictures. I did get to see it land and takeoff though, that was a treat. The IL76 is actually a lot bigger than I though, I always assumed it to be the much smaller cousin to the AN124, but looking at it now, it is quite comparable. 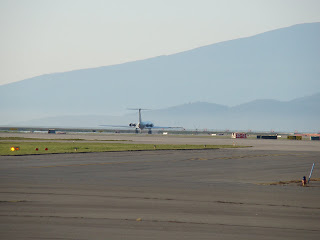 This one I was very dissapointed to not have been able to see close up, or in flight. Its an Ilyushin 62. Very cool looking aircraft, with 4 engines mounted on the rear, similar to an MD80, but with doubled-up engines.

Like the IL96, once its passengers were offloaded, it took up a parking spot out on Runway 12/30. They parked a couple heads-of-state aircraft out there during the games.

I was actually a little surpised, as they shut that runway down and set up a little military air-base out on the Runway 30 end. This is where they staged the portable hangars for the CF-188 Hornets ( F18's ). My thinking was that if you have the runway all to yourself, with a base on one end where your fighters can be staged, ready to go, why don't you use the rest of the runway to just takeoff on? No delays, waiting for other aircraft to land or takeoff? I suppose in an actual emergency the fighters would get priority, but still, they have to taxi all the way out to the closest departure end. They were sitting on a runway, why not keep it clear and just use that? Runway 12/30 is usually the crosswind runway around here, given our prevailing winds are almost always east-west due to the location of the airport at the end of a valley, alongside the water. Most people around here even call it " the crosswind runway " instead of 12/30 as it is rarely used except in very strong north/south winds, which is very infrequent.

I doubt the CF-188 has any serious concern with anything but the strongest of tailwinds when taking off. I suppose its safer to avoid, but given the rest of the risk management that they accept and deal with as part of their job, I doubt a little tailwind bothers them all that much. 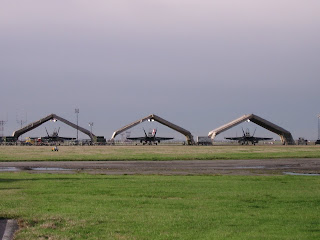 The hangars themselves are pretty neat.

They look to be brand-new, and took them a couple days to set up out on the runway. They are entirely portable, have their own electrical system inside, and open up on both the front and back sides. I imagine this would be handy for a temporary fighter base, as you could open both ends up and start up the jet right inside the hangar and pull out and take off without the delay of being towed out. I suppose you could pull in the same way as well. I never did see them do that though, it was always in and out with the tug and tow bar. 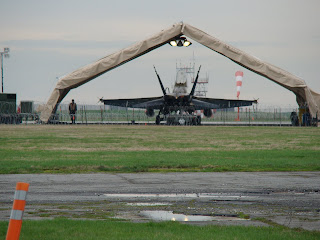 They also set up a pretty elaborate perimiter fence of concertina wire, and had armed gaurds out there as well.
Posted by 5400AirportRdSouth at 10:06 PM