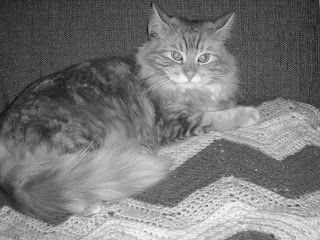 Well, we had a death in the family recently.

My little Kitty, Nekko-Chan has gone to the great scratching post in the sky.

A few weeks ago, she simply stopped eating.

A few days went by before we both noticed it, and then we waited for another couple of days, trying to entice her to eat. We changed her food, bought her her favorite treats. Tried keeping the dog well and truly segregated from her. Tried moving her food, her litter, her toys and blankets to different places, with no luck.

Eventually, had to take her to the Vet to find out what was going on.

She didn't seem to be in any discomfort, just a little lazier than usual ( this is a cat, its hard to tell when they are being lazy-er ). The vet couldn't do much, as our car is not really very friendly. In fact, she is kind of mean.

I don't mean it in a bad way, its just that she wasn't much of a touchy-feely-come-pet-me kind of cat. She liked new people to the house, and would even deign to let guests pet her on occasion. Making TLW and I look like fools after we would warn people not to try and pet our cat and then she comes over and rubs up on their leg and purrs.

She was a rescue-cat and I remember the night we went and picked her up from a no-kill shelter run out of a woman's home that TLW had come across.

All the other animals were running loose in the house, the yard, the neighborhood, even. When we arrived to pick up Nekko though, the woman had to go and get her from a seperate area of the house. She told us at the time that it was because Nekko was a little shy around the other animals. I'm sorry, but that was a bold-faced lie. Nekko was probably making the abused pit-bulls cower and wet themselves, necessitating a little time in solitary.

We were given her in a box and we drove straight home. She sat so still in the box and without the usual fussing or meowing that cats in cars will do, that we thought she had died of fright.

We got her home and let out and she curled up in our laps and was very docile for the first couple days. Then, once the shock of the change in surroundings wore off, her regulalr perosnailty came back.

In Japan, " Chan " is sometimes added to girls names in an affectionate form. Sort of similar to Miss or Missy. Often, the fist name will be truncated and "chan" added on as an affectionate name for a young girl. Julia might become Ju-Chan, Tomoko would be tomo-chan, etc.

You could pet her, if she willed it, for a few strokes. The top of her head only, maybe one or two down the cheek. Touch her tail, her tummy, her back or her sides and she was going to draw blood.

I'm not even kidding. She'd give you a warning growl if you were lucky, but if you ignored that, the next one was a full-claws swipe. I've had grumpy cats before and the worst was a hiss and a swat with claws retracted, to let you knwo they were unhappy, but generally still acknowledging that you as the human were still the alpha.

Not so much with Nekko. She knew very little fear.

Both TLW and I had a couple instances over the years where we were attacked by her. Both times, we would be sitting down, watching TV and she would come full-tilt across the room, out of the blue, and hissing and spitting, take a few swipes at you before racing away. TLW got it in the head/hair once and and we both got it in the ankles as well. Its more than a little unnerving, believe me. That was a few years ago though, whatever we were doing that pissed her off so much, apparently we've stopped doing it.

In any case, the Vet tried examining her and was met with the Claws of Doom and her best Death-Howl. He wouldn t even touch her and asked me if I could hold her for him to examine. I laughed and told him "No.", not without those heavy duty falcon handling type gloves on. Even then, she was extremely uncooperative, to the point where sedating her and keeping her overnight for blood tests was the only option.

One day and a large sum of money later, we brought her home, with the bad news. He thought she might have a fatal, incurable disease. He gave us some antibiotics in the hopes he was wrong and that she might get her appetitie back, but no luck.

A few days later, she was on her last legs. She was practically falling down out of exhaustion and dehydration. One last trip to the vet and now she's gone. 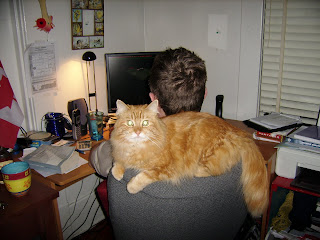