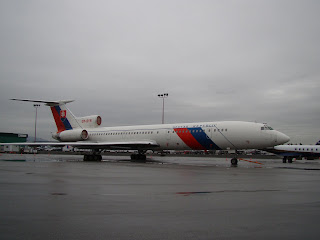 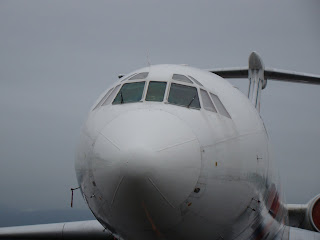 This was one of my favorite visitors during the Olympics. Its a Tupolev 154 ( TU-154 ). Very similar to the Boeing 727, a loud, old-technology jet liner, with three engines arranged at the rear of the fuselage. 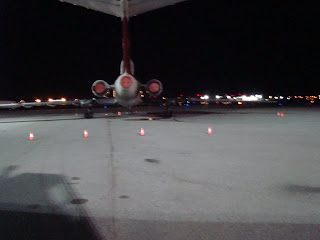 I thought at one time that these type of aeroplanes qualified as " Centre Line Thrust " types, but apparently not. 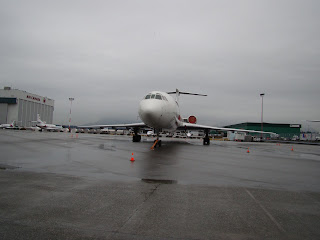 In a normal ( engines on the wing ) configuration, if one engine loses ( or two on the same side if you happen to be flying an extremely cool airplane ) power, a situation will exist where asymmetrical thrust will cause the aircraft to Yaw towards the dead engine. Not having a multi-engine rating, I'm not "formally" trained on this , but I have read a little bit. And I stayed in a Holiday Inn Express last night.

In some prop aircraft, there is the added hazard of one of the engines being the " critical " engine. It is critical, as the rotation of the prop and it's gyroscopic properties, will also cause additional yaw to the aircraft. If both the props are spinning in one direction, one of them will add to the total yaw moment being experienced by the aircraft and the other will subtract in an engine failure scenario. If you have yaw from only one engine providing asymmetric thrust and that yaw is compounded by the yaw created by the prop gyroscopically, you might have enough adverse yaw in the same direction to cause you to be unable to counteract it with the rudder. 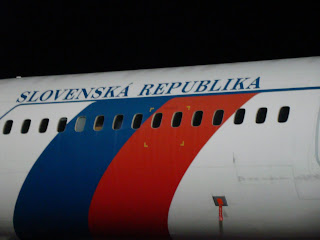 This is solved in some aircraft by having the props rotate in different directions, or counter-rotating, if you will. This cancels out the critical engine effect regardless of which engine fails on you. 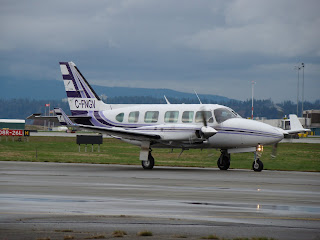 I imagine the reason all light twins are not counter-rotating is the costs associated with interchangeability of the engines, their mounts and all manner of ancillary equipment that hangs off of them. If they both spin the same way, you can mix and match, all the bits are the same on either side. In a counter rotating set-up, I think everything from the engine mounts to the props would have to be side-specific. 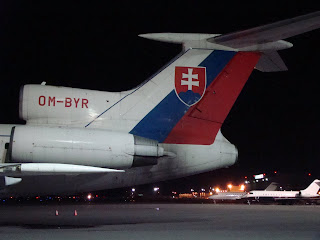 In any case, I guess the 727 and TU154 generate enough asymmetric power, even with their engines being relatively close to one another laterally, that they are not considered centre-line thrust. In fact, when I look up the definition of Centreline thrust, it specifies the "absence" of asymmetric thrust, not the amount of, as defining CL thrust.

Engines on an aircraft are numbered, starting from the captains left. In a twin, the #1 is on the left wing and the #2 is on the right. 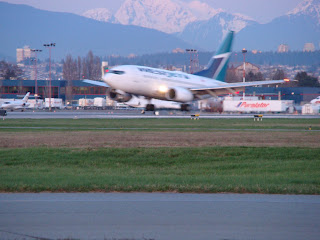 There is an old story that the 727 was nicknamed a " Three-Holer ", not due to the fact that it had three engines, or air intake "Holes" but because it had three Lavatories. 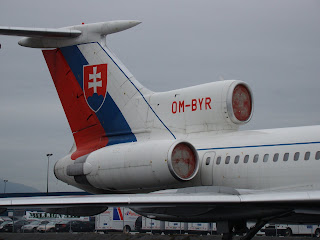 I only saw the TU-154 land, so I can't comment from first hand knowledge on that one, but I fuel and see the 727 depart on a daily basis. The engines are loud enough on takeoff that you can feel it in your chest.

They also send out a giant plume of blackish smoke behind them as they power up for takeoff. I've seen pictures of old DC8s and 707s with the older generation engines taking off, and those kick up an incredible amount of black smoke. If those were around today, the environmentalist crowd would have a stroke.

I seem to recall that some of the older jet engines from that era were also water or methanol-injected. I also remember reading somewhere that the water/methanol was injected into the intake air to cool it evaporatively, causing it to be denser during compression. The side effect was partially burned fuel being shot out the back along with the water, causing a lot of black smoke. I could be wrong and I'm too lazy to google it. meh.

One thing that struck me about the 727 and the TU154 was the fact that the TU154 has a LOT of anhedral and the 727 has a modest amount of dihedral in the wing design.

Anhedral and Dihedral refer to the shape of the wings, wether they slope upwards or " droop " downwards in relation to the fuselage.

If you look at a Cessna 172, a high-wing aircraft, you can imagine that the fuselage of the plane acts like a keel when it is in flight. The weight hanging off the bottom of the wing, serves to stabilize it, just like a keel does in a boat.

So an aircraft with a low-wing, has the destabilizing effect of a lot of weight ( the fuselage ) sitting on top of the wing.

Thus, it is common for a low-wing aircraft to have the wings angle upwards. This moves the weight lower in relation to the wings and stabilizes things again.

In other aircraft, other bits of the plane, the wings, engines, stabilizers, etc, cause so much stability, that they need to " destabilize " things a little to make it possible or easier, to do useful things like being able to turn or climb. This is where Anhedral comes in, raising the fuselage up in relation to the wings.

Stability sounds like a good thing, but you can be too stable as well as too unstable. Some aircraft need to lean on the stable side of the equation, like airliners, as they are designed for heavy loads with smooth, easy flight characteristics. Other planes, like fighter jets, would prefer to be unstable, making maneuvering more dramatic and sudden.

The 727 and the TU154 have similar designs to my uneducated eye. Same engine-thrust setup, with the three-holer design. Similar size wings, fuselage and tail.

I'm sure there is a valid reason. Engineers, Russian or not, rarely tend to do things without a reason. Even if that reason is simply " because it looks cool ".

One other cool thing I noticed, and this might be related to the stability issue, is where the landing gear go.

On a 727, the fold inward, towards, and partially into, the fuselage. When they are down, they are just outboard of the fuse, under the junction of the wing and the fuselage.

On the TU-154, they fold backwards, into pods under the wing. 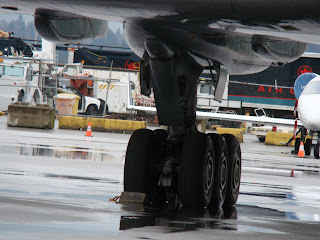 The landing gear are fairly heavy bits of airplane, by necessity of their function. Being in between 200,000 plus pounds of metal and the ground in a controlled collision, several times a day for the thirty years kind of dictates it. I wonder if having all this weight out in the drooped wings counteracts things? 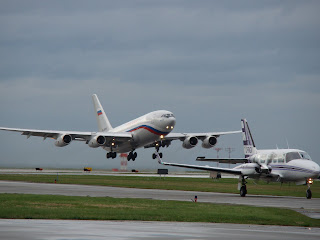 I'm sorry, but the landing lights on the IL96 are just wrong.

Maybe its me, but it looks severely buck-toothed to me.


I tried to catch a picture of this while I was driving.. 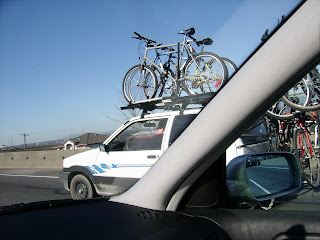