Haven't had much time for updating, and probably won't for a little while. The ice is going out fast on a lot of the lakes we have cabins on, so the push is on to get them ready in time for the first guests. We are supposed to head up north today to base out of one of the camps, and send 3-4 days opening a couple of the nearby camps, but the weather is looking pretty crappy this morning. We'll see if we are able to go, but the forecast doesn't look that great...not for a couple days even. 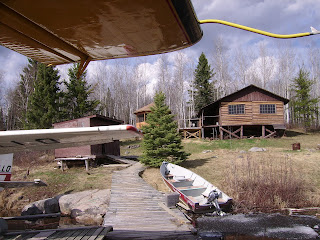 We went up yesterday and opened up one camp, just barely getting by the ice that was moving around the lake. Had to do a little ice breaking with the boats before we could leave as the wind had picked up and blown a lot of the loose ice towards the little bay where we were. 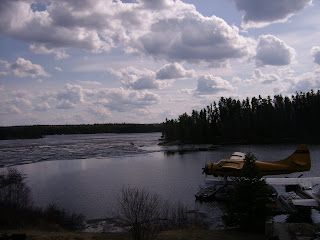 Spent pretty much one whole day cleaning the cabin, getting the boats all set up with motors, seats, ropes and ready to go. The lake itself is almost an hours flight each way from base, so getting there and back took a little time.

Flying over this country is pretty impressive...hard to follow on the map though, all the lakes look the same and there is no real high ground or major landmarks to orient on. Had to pinch myself a few times that here I was, sitting up front in a piston otter, flying over northwestern Ontario.

Was nice to get up in the plane as well, the otter is quite the beast!! 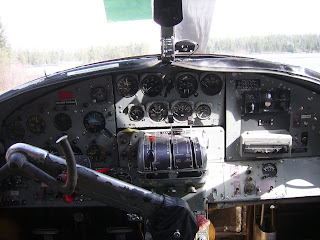 Not to mention all the gear that has to be brought up to the cabin, and therefore packed and unpacked into and out of the plane. A lot of the tools and stuff we brought up wasn't needed, but it would kind of suck to get way up there and find out a bear had ripped the door off and you didn't bring the necessary tools to fix it. 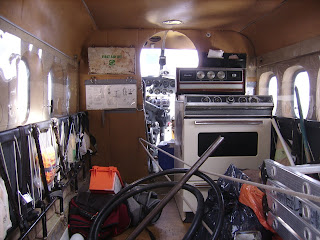 The cleaning itself is a fair bit of work as well . Not only had the cabin been sitting empty all winter, but it doesn't really get a good cleaning except during opening. The guests are expected to leave the cabins as clean as they found them, so other than a small cleaning in the fall when we close the camps down, they pretty much get one really big spring clean during opening.
Posted by 5400AirportRdSouth at 5:23 AM