Back from The North 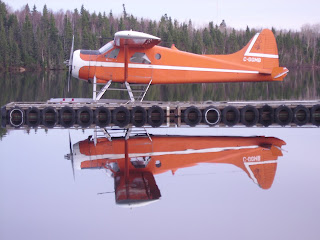 Wow, that was quite the trip. We left base on a Tuesday morning, expecting to be gone for 3-4 days. We ended up returning the following Monday morning, almost a week in total. 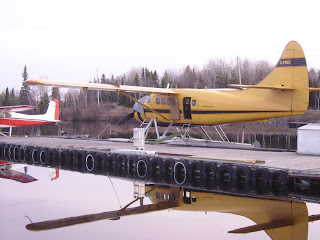 The trip started well, with an hour and a bit long flight, fully loaded with gear, up to our northern base camp. We had enough equipment and supplies to open a couple camps and there was a substantial amount of stuff cached at the northern camp as well in order for us to open up the closest five camps, once we were up there.

Weather was dicey going up, but not too bad. Had to break ice with the boats again to get the larger aircraft in to dock and offload. Its pretty impressive how much ice a little 14 foot aluminum boat with a15 HP outboard motor can push around the lake. Can't push it very fast, but its impressive to see that much ice slowly being maneuvered around by a little boat.

One of the main pieces of gear we brought up with us is the outboard motors for all the boats at the fishing camps. Each camp has 2-3 boats, so needs at least one motor for each boat, plus a spare in case someone wrecks one. All the motors come back down south to base at the end of the season so they can be fully overhauled and sent back up in the spring with some assurance of a problem-free season.

Each motor weighs about 85 pounds, and most of that weight is in the engine end of the motor. It also has all manner of sharp and awkward bits sticking out of it, along with fragile bits that you need to be carefull of with when lifting or putting it down. To add a bit of an additional challenge, the height of the aircraft when loading / offloading is about head-high. So a full load of motors requires each of these buggers to be lifted up...carefully!... almost over your head and then carried onto the dock...watch your step now as you step off the float ( wet...icy... ) and onto the wooden dock ( also wet...icy... ) and carefully lower it to the ground in a safe spot. Hurry up though! The weathers closing in!! 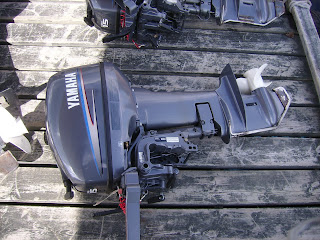 Yeah, not a big fan of the motors. I'll be glad when they're all dispersed out to the camps.

Once we got everything off-loaded at he northern base, we reloaded with the gear we needed to open one camp. A combination of stuff we brought with us, and stuff that was cached at northern base. Along with motors, groceries, tools and repair equipment, we also had to bring in several 55Gal drums of boat fuel. Each camp has a large tank where we fill it up with boat gas for the guests to use in the boats. These drums are a little over 300 lbs each and also need to be man handled up and into / out of the aircraft, along slippery docks, rough ground, over obstacles, up hills and all manner of challenges. Most of the moving is done by rolling, sliding, pushing or tilting the drum, so theres no real dead lifting...which would be near impossible anyways.

Getting them into and out of the aircraft involved three guys rolling it up onto a ramp and then slllllowwwly sliding it down towards the dock. As long as everyone keeps their grip and keeps it sliding slowly, all is well. If it is allowed to pick up any speed at all though....bad things happen.

Got into the first camp ok. The little plane, a Cessna 206, goes in first and the guys jump out and send out a boat to do some ice-breaking and clearing a path for the Otter to get in. Gear gets offloaded onto the dock and we "Give'Er!". Everyone has job to do, from setting up he boats with gas tanks, seats, motors, ropes and anchors to testing the boats and making sure the boat ramps along the shore are in good shape. Firewood needs to be cut and split, outhouses swept out, fallen trees cut down and paths cleared. the cabins, which are boarded up for the winter, need to have the boards taken down, all the stuff stored inside dragged outside and cleaned off. Floors, walls, stoves, fridges need to be cleaned, swept, mopped and made ready. Propane tanks need to be hauled up to the cabin and hooked up. Water pumps re-connected and checked, hot water tanks tested. Windows cleaned and groceries put away. Beds made, linens stocked and brush cleared. Maybe we squeeze in a lunch break, but its a full days work for a crew of five, believe me.

We were lucky and had really nice weather for all of this, even made it back to the northern base camp in reasonably good weather.

A late camp supper, a few beers and we all collapsed into bed with little hesitation to sleep.

Woke up the next morning to....howling wind, snow and ice blowing into the bay from the main lake. 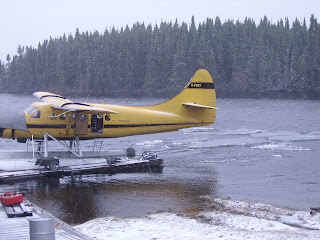 We set up a heater under the engine of the otter, to keep the oil a little bit warm, just in case the weather broke. It was almost -13C when we woke up! The engine was wrapped in tarps and a propane stove was set up underneath, with stove pipes directing the hot air up onto the engine. Turns out the weather wasn't going to break for a good 36 hours in any case, but you never knew....

Our only communication up here is with satellite phones and even then, they are only good for very short conversations as they go up and down, with no guarantee of getting back in touch with your party immediately if it goes down mid-call. Conversations are very short and reserved for only the most important info, as it is a frustrating process.

Usually the bad weather can mean a day off, but in this case, we had lots of work to do around northern base. So for the two days we got stuck there, we were kept pretty busy. Luckily, most of us had brought along the full-body rain gear that had been suggested, so we were dressed pretty good for the conditions.

After two days, the weather finally cleared enough that we could once again, load up the Otter and make a foray out to another nearby camp.

Except, now we are two days behind schedule and it is looking doubtful that we will be able to get all the camps done that have guests scheduled arrive to, in the next day or so. So, for two days we worked flat-out, furiously loading, unloading, lifting pulling, chopping, sweeping, nailing, pumping, rolling, lifting. At the end of it, we were just finishing the last camp as the Otter was pulling up to the dock, to offload the first guests of the year.

We rewarded ourselves that night with some fresh walleye, caught off the dock at our northern base and cooked to perfection by the owner. It was still raining so we didn't get to try the fish-fry ( battered and deep fried outdoors on a propane fish cooker ) but they turned out great baked in a home made batter instead. I'd never eaten walleye before... wow... now I wonder what all the fuss over cod is?? Walleye is so much better in my view. The only caveat being of course, the phenomenon of being really hungry after working so hard for so long, seems to make things taste a lot better....especially the beer!

Back to home base on Monday, and time to recharge and refresh. Hot water facilities were not available at the northern base, so all of us had been working like dogs for almost a week with only the basics of clothing to be changed...socks and underwear... and of course no showers. Since we all stank up there, plus it was sub-zero, you didn't notice it much..but once we got back to base and there were civilized people around, you realized how shaggy and rank we all were right away.

I was a tough grind, but it was also a good way for the crew to get acquainted, living and working together 24/7 in close and demanding quarters. you really have to work as a team.

Shower, shave and sleep. The next day was trip out to open up yet another camp.

This time it was just a day-trip. There and back in one day. Nice sunny weather and no real rush as the guests aren't due in for a few days.

Once we got back to base, the boss told us that the weather wasn't looking too great for the next day or so, so we have the day off today. Man, I need it too. Thus kind of work is hard on the body...chapped lips, hands. cracked heels, bruised everythings.

Another 6 camps or so to go, then we settle into an operational routine, with guests coming and going.
Posted by 5400AirportRdSouth at 6:07 AM