Was my last day fuelling today.  Saying goodbyes to everyone at work. I'm planning on being back here in the fall anyways, but bye-for-the-summer I guess.
Typical Saturday...dead quiet, nothing going on at all. Counted down the hours till the Hockey Game started and was glad for something to do. Of course, we immediately got an unscheduled large aircraft, a 737, calling in saying they were 20 minutes out and wanted fuel, lavs, and a quick turn.
The caterer had already stopped by and we had loaded up all the food in our van, as we were going to drive her over to the Gate so she could deliver the grub when the aircraft showed up.
We hadn't counted on the crew wanting to come to our ramp first and take fuel, service the toilets, load their food and ice, before reporting to the gate. Oh well, we didn't have too much else on the go, so no biggie, we could handle it on the short notice.
Little bit of confusion as we realized after they had left our frequency on the radio, that if they hadn't bothered to tell us they were coming, had they told customs??
We checked, they hadn't.
Couple of phone calls later and it turns out they called customs just after we had, and everything was sorted. Not before we worried a couple people and sent everyone scurrying to double-check that everything was kosher.
Oh well, like I said, typical Saturday.
My team lost the Hockey game, but the caterer made extra meals for the line crew guys, so I had a good meal anyhow.
Oh, I had a few cool planes show up in the last few days, and wanted to share a little; 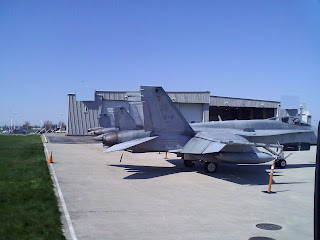 First, we had some F-18's.  Three of them showed up and spent a couple days coming and going, doing some cool fuel-to-noise conversion routines in the area. They are carrying drop-tanks, for extra fuel capacity. They also have luggage pods, where they can store their little rolly-suitcases..haha
I got to marshal them in and out a few times, that was fun. There are a couple special little marshaling signals that one of the pilot took the time to show me. One of them was the signal to reach underneath his plane and reset his flight computer with a button hidden in the wheel well.
He said sometimes the system sort of crashes and needs to be reset. Why the reset button is on the outside, beats me. But there is a special signal they will give if they need you to reboot it.
Another one was the signal to go and visually check a hydraulic indicator of some sort on the back of the plane, and give him a thumbs-up or a thumbs-down, depending on whether the gauge was in the green or the red. Again, why this gauge wasn't in the cockpit, beats the heck out of me.
I like marshaling the military guys in and out. Most civilian pilots sort of  treat the marshaller as an added layer of safety, there to give you suggestions on where and how to park. The military guys always take your instructions literally, instantly and unequivocally. It is neat how you can make them do whatever you want and they will just do it...no questioning hand gestures or pilots pointing, trying to tell you what they want to do, the fighter jocks just DO IT.
No delay or hesitation either. You can park them up nice and tight to each others wingtips and they will stare right at you the whole time while you guide them within feet of each others planes
.
When they depart too, their checklists take FOREVER...they are simply following orders, but its not uncommon to stand there in front of their howling jet for 30 minutes while they complete their pilot-mojo-voodoo in the cockpit.
While they are sitting there, engines running, they attract a lot of attention from all the other airport folks was well. By the time they are ready to go, they've got people out of their hangars and offices, outside, camera's at the ready. Again, the marshaling gets fun now, as you have EVERYONE out there, watching you. 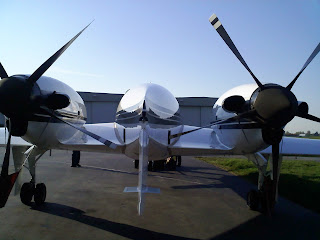 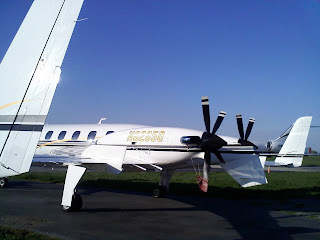 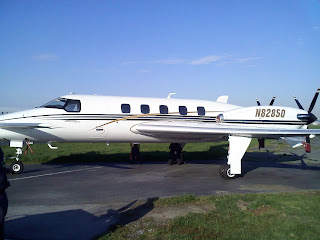 Second cool arrival, was a Beech Starship. Very rare plane, in fact, I believe there are only five remaining in flying condition. The pilot / owner was very happy to talk about this unique plane and we chatted for about a half hour.  Apparently this aircraft is unstallable. The Cunard on the front is set at a higher angle of incidence than the main wing, so will stall first, dropping the nose, and reducing the angle of attack of the main wing. It also has Elevons which surprised me, as I assumed that the Cunard would take care of all the pitch control, but apparently not.
The rear-facing props add a slight efficiency in that the turbine mounted inside, doesn't need to change the airflow direction. If I remember correctly, it draws the intake air directly through the front, under ram pressure, and it flows directly through the compressor and hot-section, only changing direction slightly to head out the exhaust on the side of the engine. If you look closely at most turbo-prop engines, you'll see that the intake air is taken in the front, usually just under, or over, the prop hub and directed to the back of the engine, where it is drawn into the turbine and compressed, ignited in the opposite direction, that is, toward the front of the aircraft. Then, the exhaust is turned around once more to be sent out the side, but facing rear-ward, so that its exit doesn't act in a direction opposing what the prop is trying to accomplish. Its alot easier to explain when the engine is in front of you...
Apparently however, it does have a few drawbacks, in that the airflow is disturbed by the wing and fuselage before getting to the prop, causing uneven air densities for the prop to act on.  This also causes an uneven or surging noise of the prop, as well. 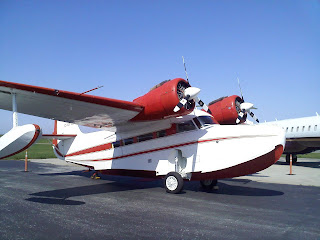 Last, but definitely not least, was my absolute, all-time favourite aircraft, the Grumman Goose. I love everything about this plane, however, having never flown one or in one, I have to reserve judgement on a couple key items... ( for now! ) 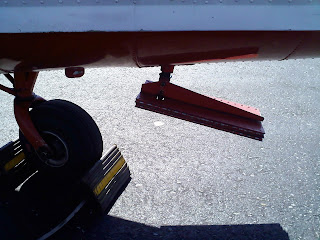 Note what seems to be a collapsible water-rudder! I couldn't see any other water rudder anywhere, and this thing looked hinged, and  in the right spot, so I am assuming that's what it was. It would appear that the pilot can un-hinge it from inside the cockpit and use it for directional control while on the water. 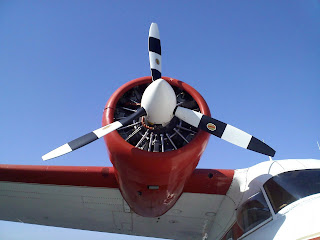 Those radials engines make such a soft, purring rumble, it really has to be seen and felt to be appreciated. 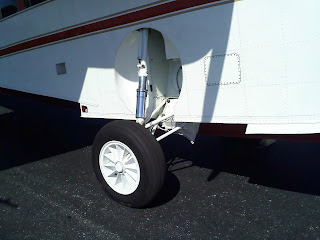 A good amphibian, the wheels fold up into the hull when operating on the water. Can be dropped in flight for landing on a runway, or dropped while in the water to taxi up a ramp. 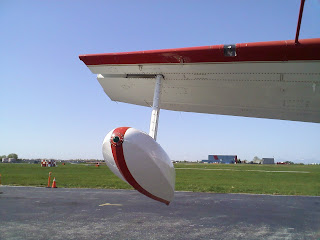 These are called sponsons, and they can be raised up, where they become a sort of tip-tank looking structure at the end of the wing ( except, I do not believe they hold fuel...they might, but I suspect not ).
They are lowered down for use in stabilizing the aircraft when it is operating on the water. As it is a hulled seaplane, it only has 1 "float", that being the fuselage, so it can easily tip and drag a wingtip in the water during low speed operations. The sponsons act like mini outriggers and will keep the wings out of the water when lowered.
Posted by 5400AirportRdSouth at 11:15 PM