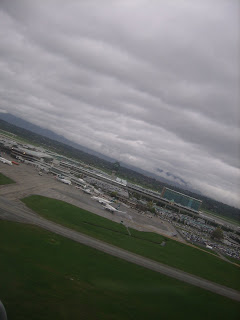 Morning started out a little rough.

Getting up at 0430 and getting ready to go. My wife had told me, the night before, to not worry about making noise or closing the bedroom door. She said that she would most likely get up, ungodly hour be damned, and hang out while I got ready to go.

She slept right through my shower, shave and coffee making rumblings. Part of me wanted to go wake her up and spend just a little bit longer with her before I left, the other part wanted to let her sleep and save us both the sad goodbye moments.

I went in and woke her 5 minutes before I had to go, and we said our goodbyes. She is so incredibly brave, her smile not wavering for a second while we hugged and I left. Caught her peeking out the blinds as I drove away. It was raining quite a bit when I left too, must have been why the windows seemed so blurry, all the way to the airport.

Everything went nice and smoothly at the airport, even though my main backpack was about a pound and a half over the limit. The Air Canada guy smiled and said it must be the bin he put my bag in, “ some of them are heavier than others “ wink wink and a smile.

It was quite nice to have a pleasant customer service experience with every, single AC employee that I encountered this morning.

Even the ramp guy who pulled the chocks and walked the wing on my side, did so with enthusiasm and a smile and wave to everyone on board. The whole grumpy AC stereotype was completely absent today.

In fact, I have to admit being a bit taken aback by the whole experience. I have often lamented the AC customer service experience in relation to their main competitor, but I wonder if a culture of change has actually taken root, or if my (mis)conceptions were simply allowed to be led by others opinions. We all seem to be conditioned by the media to expect the worst when it comes to air travel... 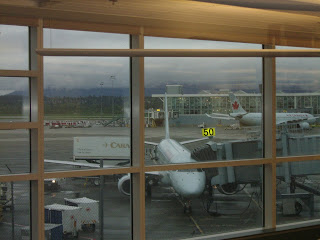 Got to fly out on an Embraer E190 for the 2.5 hour flight, nice plane. Have never flown on this type before.

It was neat kind of " following along " with the crew and trying to anticipate, or at least identify, what was going on..... ok, there's engines stable, max thrust, ok, that was climb power being set.....oh, levelling off a bit early, departure maybe hasn't given us clearance to cruising altitude yet...oh, here's the climb again, up we go.... hmm, less wing twiddling going on, must have kicked in otto. Heard a couple of chimes as well that I am sure are signals for the flight attendants to do / not do something, but couldn't figure it out. I may be way off with what was going on in front, I really don't know THAT much about airline flying or operating a big jet like this...but it is fun to pretend I do.

I made sure to read the safety card thoroughly and count my rows to exits in front and behind me. Takes 30 seconds, and what else do I have to do??

Funnily enough, it appeared that there was a second lever that had to be pulled after the Embraers door "handle" had been lifted, in order to open the door. If I was in a blind panic, I'm not sure I would have figured that out.... how many people sitting between me and the exit, that will get to the exit before me, know about the second handle?

Speaking of the media... good thing they have so earnestly warned me of the impending global doomsday that will be the swine flu pandemic. Its always nice to get advance notice on the end of the world, so you can beat the big guns-and-ammo lineups down at the survival-mart.

I have to admit, this is the worst case of media hysteria-mongering that I have had the disgust to witness in recent years. Luckily, the media's consistency in severe bias, fear-mongering, misinformation and downright pandering to business interests instead of public information interests, has now taught me to question every single thing I hear through conventional outlets.

Every article and news story needs to be questioned as thoroughly as you would pick apart a ham sandwich with moldy cheese on it if you were starving. There must be something good to eat in there, and frankly, its all you have....but be careful, if you eat the wrong bits, its going to go in one end and out the other without helping things much.

I almost giggled on the plane listening to the news anchor state that even though cases " appear to be winding down, the virus could simply be going into a dormant state and come back in a mutated form in the fall ".

I wonder what they have planned for us this summer, that they could'nt fit in any more time for the swine flu for?? 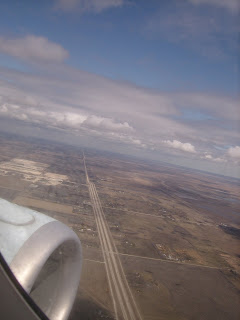 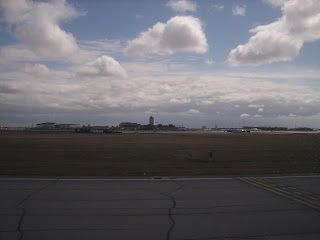 Anyways.... I'm here in a large-ish prairie city, hanging out in front of the provincial legislature building. I've got about 8 hours to kill, so thought I would bang off an entry on things so far.

Not much has happened, relatively speaking, so I don't have much to write about. But like any good prairie city, they have thoughtfully provided block-heater plug-ins for the local politico's, so I'm stealing their hydro for the little netbook, and utilizing the nice sunny day to air out my feet and kill an hour or two here on the grass.

Its a nice mix of cumulus clouds and sunshine, so its just right, little bit of sun, then a little shade to cool off. My feet are happy being out and in the grass as well. 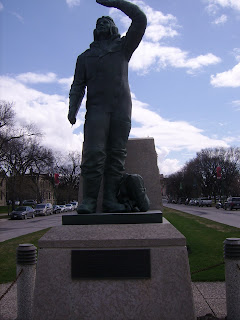 Found this guy as I walked towards the legislature building... I don't know what it was that tipped me off that he was an aviator, maybe I saw his headset from a distance subconsciously. He is part of a memorial to student pilots and their instructors killed in Canada during training operations for WWII. I think I remember hearing the numbers killed at some point, and it was quite surprisingly high. If memory serves correctly, Canada played a huge role in training allied aircrews. 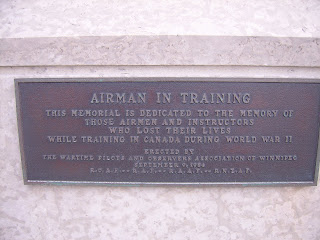 I can already see though, that the afternoon heating of the ground is most likely going to bring at the least, some showers, at worst, possibly a thunderstorm. Hopefully I can find somewhere indoors to hang out for awhile a little later on. Might have to keep my shoes on though....