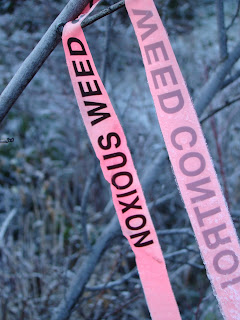 Took a trip up north of here the other day, with my mom, up to my brothers place.

He lives in little cabin near a tiny little town ( the pop. less than 100 kind of tiny ). 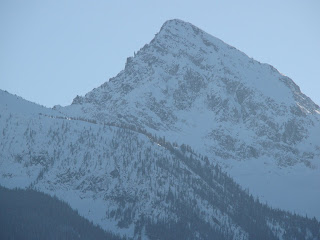 The company he works for books adventure tourism trips down to Belize and they are based in the weirdest of places, far back in the mountains. It works out really well for all involved though, as most of their business is done either on site down in Belize, or over the phone / internet. The quality of life is drastically improved for all involved up here, by living / working where they do. 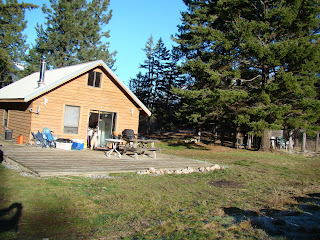 The office is in the basement of a small cabin set on a 90 acre property just outside this tiny little town. The upstairs of the cabin is an apartment, where my brother lives. 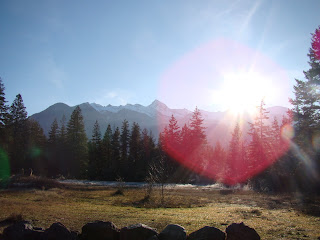 Sharing the apartment with him are two enormous malamutes. They were rescue dogs and are named Happy ( Hapi ) and Hero ( Hiro ). The assumption is that they were originally owned by a Korean family, but the names translate quite well. 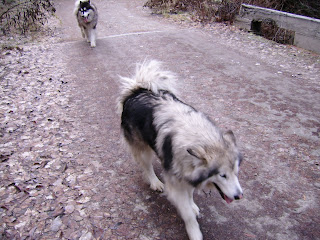 When the property was bought, the original owner had made some cool little improvements as well. One thing was a natural hot-tub / wading pond. Cut into the ground and drained by a pipe to the nearby stream, the pond was made of large rocks set into a hole dug into the ground, making benches to sit on. 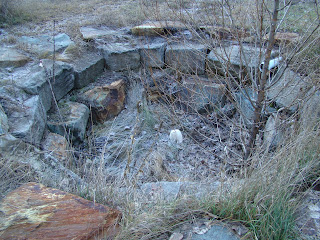 You could easily fit a dozen soakers in this pool, but I can't imagine it would be easy to heat the water or keep it clean. Neat idea though. 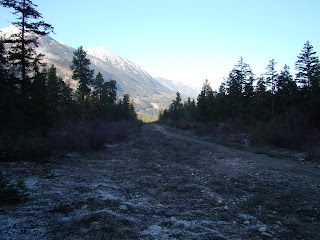 Their was even an airstrip built on the property as well. Being out of use and maintenance for the last few years though has taken its toll. Theres a few goods ruts running along the "runway " and even cutting across it in a few places. The runway has also been narrowed down to little more than a ATV track, as they're the only ones really using it and the brush is starting to take over elsewhere. 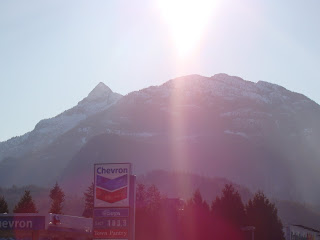 The drive up was spectacular. We've finally had a few days of sunshine here on the Wet Coast, and it looks like we might get a few more too. Very Nice. 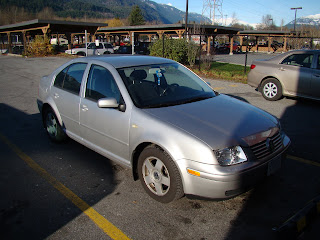 I got to take my new wheels out for a shakedown cruise and am happy to report that it did just fine on the highway. The mileage boost was impressive and its quite comfortable even for a few hours at a time, despite it being quite small.

I also got to pay a visit to my old car, which I sold to my brother, almost seven years ago. I have fond memories of this car and was surprised to see it in fairly gfood shape. I knew it had been sitting up on his property, unused for at least a year, maybe even two, so was expecting to see a moss and mold covered hulk lurking in the bushes, but its actually looking pretty much like how I remember it.

It was a good car...but is a bit ( ok, more than a bit ) of a pig on gas. I was considering buying a 1000$ beater to get me through the next year, unfortunately, the gas consumption on this thing would have more than cost the difference between a car loan and this thing. 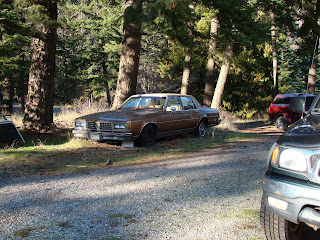 The only real difference in the car that I can see is a nice dent one of the local kids decided to kick into the back door. I'm surpirsed that it hasnt been picked up by a local though, this would be a perfect war-wagon for a teenager who doenst have to drive / commute long distances. As a parent, I would totally buy my teen something like this. Very safe, ( every car around you is your crumple-zone ) comfortable, and they're not going to be paying it for years when they inevitably wreck the thing in the first two years. 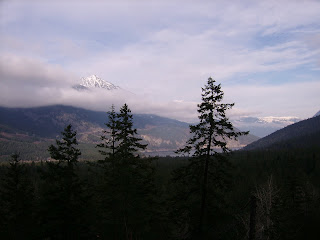 It was a great visit, we spent lots of time just chatting, walking around on the logging roads surrounding the property and just hanging out. 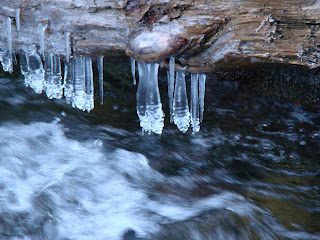 Temperatures definitely a little more winter like up here, I think we even pulled double digits below zero overnight. Scary stuff for a left coaster. 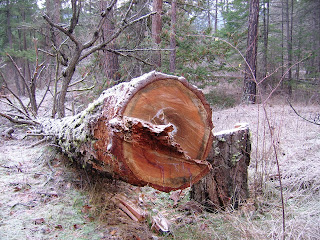 Lots of evidnece of the fight against the Pine Beetle up here. The owners are trying all kinds of things to try and keep their trees from being infected by these things. There were little packets of some kind of bait/poison tacked to a lot of the trees and other trees which had been infected were cut down and had the bark removed to try and quarantine them.

On this freshly cut tree, apparently the Bluish ring about two inches into the tree is a tell-tale sign of this tree's death by pine beetle. I was told that its not the beetle which usually kills the tree, its a single or various infections that get into the now-exposed interior of the tree and eventually kill it.

I don't know too much about the pine beetle thing, but I do remember reading a good article on it, blaming both the environmentalists and the logging groups on using the pine beetle for their own advantage and hamstringing efforts at the fight against it.

The Environmentalists claiming that the logging interests were blowing the whole thing out of proportion in order to get access to stands of lumber that were off limits to them in the past but wereclaiming them to be now " infected " and should be harvested quickly before they were dead and useless to everyone.

The Logging interests claimed the Enviro's were slowing down the fight by this tactic and were hurting them by allowing the beetle to spread and damage timber lots that were due to be logged eventually, but would be long-dead by the time they were ready.

It kind of reminds me of Global Warming. On one side you have the Drama of the mainstream media, and on the other, you get the immediate reaction of a huge chunk of people who will write off anything the media says as histrionics.

One day the sky will fall and we'll be too busy out in the backyard with our TV's turned off. 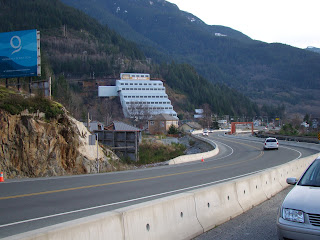 On the drive up, we noticed that they had significantly improved the old mining museuem. It used to look like something out of a springsteen steel-town video, with broken windows and rust streaked siding. Now, it looks like a brand new mine. I've heard stories about some of the local pollution that the area has suffered around it though, as a result of the gold and copper mining methods of yesteryear.

One story I read, was that the old tailings pond, full of arsenic and mercury was wiped out, along with the company town one night on a flash flood. All that pollution went straight out into the sound.

Back in the day, gold mining was particularly toxic, with the extensive use of mercury to extract gold. The way I remember it, Mercury is one of the only metals that will amalgamate with gold. So, Gold that was mixed with other heavy materials, black sand, quartz, etc, would be ground up as fine as possible and then dumped into a large quantity of mercury. The Mercury would amalgamate with the gold, essentially dissolving it into the mercury. The other materials would not amalgamate and be left behind.

The mercury is then cooked off, leaving only pure gold behind. Not sure of this method is still in use, but you can imagine the dangers of cooking mercury.. let alone the residual mercury left behind in the waste material after the gold has been amalgamated.

Old miners used to use this on a small scale even, the mercury and gold amalgam would be poured into a hollowed out potato, bound with foil/wire and then cooked in a campfire, leaving your gold in the middle of the potato.

Got called into work early the other day, to help out with fueling a special visitor. It ended up not needing my truck, as the first truck was able to fill its requested fuel order, but we're due to see them a few more times before long, so I'm hoping to get the nod again to go and poke around up close to this thing. Its Canada's newest addition, the C-17 Globemaster. More accurately, its the CC-177. 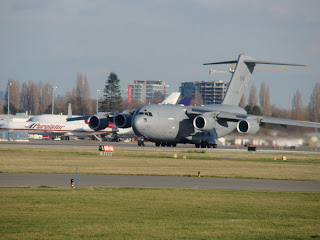 Canada adds a "C" to the original designations and usually modifies the numerical value as well.

The "C" in this case means, Cargo. Lots of Cargo.

Airplane geek stuff over, you can unglaze. 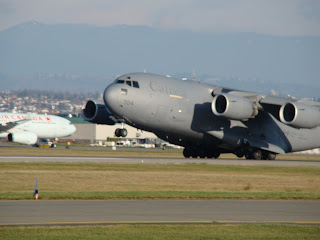 We watched it leave, empty, other than a substantial fuel load, and I think they put on a bit of a show. This thing was airborne in, by our calculations, less than 2000'. If anyone is familiar with YVR, it left on 26L and was airborne by Bravo. 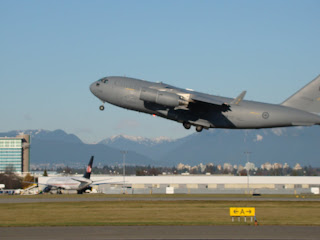 Pretty impressive for an aircraft of its size! 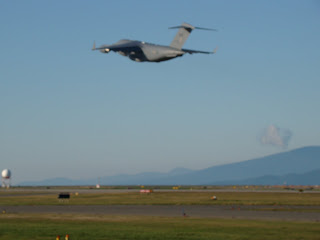