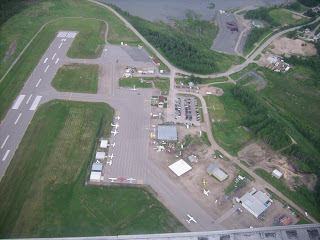 Before I started this job, I actually managed to have a little email exchange with a fellow who had worked here previously. He gave me a lot of really good info about the operation and how the season would play out. So far, he is batting a thousand...everything he told me would happen has happened, and everything that he told me wouldn't happen, hasn't happened either.

I came across this guy by doing a bit of snooping around on Google and Avcanada for the outfits name and stumbled on a thread in the forums where a few people mentioned it by name and the content of their posts led me to believe they had worked there. 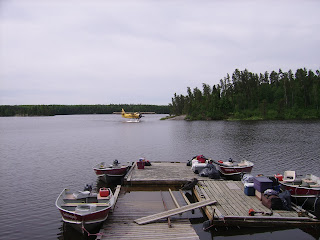 I emailed one of them and he gave me, no word of a lie, a four page dissertation on things. I've been meaning to email him back as he asked that I check in with him mid-season and let him know how things went. I'm going to point him here, in case he wants to see some familiar sights as well...if you're reading this...thanks again for the info. 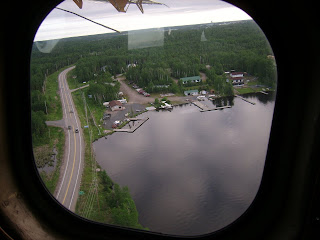 This week has been alternatively boring and dramatic.

We've had some nice weather and things have slowed to a managemable pace... Some of our daysd are less than 4 or 5 hours long and we're done. Other days, particularly the wekends can be a bit longer. Tomrow is a good example. I twill most likely be a 12-14 hour day. We start at 0400 and there are at least four flights going out, so that means the last flight will return at approx 4 in the afternoon.

The drama, came yesterday, in the way of a partial engine failure on the way back from dropping guests off and working up north art a couple of the camps. I was riding in the back on this flight, keeping the fuel drums, shovels, rakes and implements of destruction company. 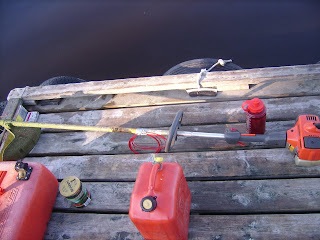 On takeoff we all noticed the engine wasn't running normally, there was a little vibration and it felt rough. Power was backed off and reapplied, and it seemed to run smoothly again. We took off, climbed up around 3000 feet and headed home. An hour later, ten minutes out from base, the engine suddenly began running VERY rough. Everyone was wide awake and paying attention now.... not that anyone..ahem.... was sleeping or anything...

We limped the last few miles with the engine running rough, but still giving a decent amount of power. On landing, smoke poured out of the exhaust..so much smoke that we completely obscured the bay in which we had landed, it was quite the sight. The smoke was even starting to find its way into the cabin. Later, we found out that over six gallons of oil was missing, and most likely all burned up in the exhaust after landing.

So, that was the drama. But theres more coming.

Now, the airplane is down. We're chartering flights from some of the other companies in the area to keep the flow of guests uninterrupted, while the new engine is being prepared.

It looks like sometime next week, we will be doing an engine swap, right here on our dock. This should be interesting. Unfortunately, very expensive for the owners, but for me, very interesting.

There is talk of someone having to drive down to the Deep South USA to go and pick up the new engine, I'm keeping my fingers crossed that I get tapped for that job, that would be quite the adventure.

Not a lot of pics to share right now, but there will be some coming soon, I promise. 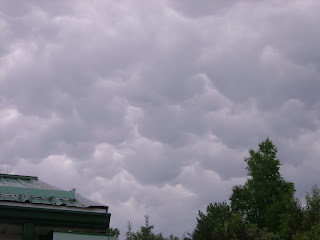