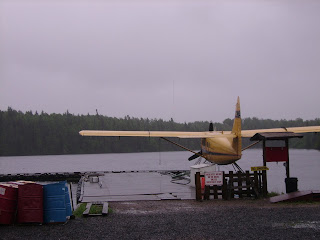 Had an interesting little experience this week. Got a phone call from an outfit I had sent my resume to at some point.

It was quite the phone call. He introduced himself as the chief pilot of an air service I was familiar with ( having applied there.. ) and asked if I had a few minutes to talk about a job opening he had.

I'll be honest, my heart kind of skipped a beat. This was an interview for a flying job. It's not like I'm unhappy with what I'm doing, but lets face it, I've invested a lot of time and money in the past two and a half years, to get a flying job.

I was disappointed, I'll be honest, but have expected that this might be a problem for some of the entry level type jobs I applied for. I mean, these companies have tons of experience in hiring guys to come and work for them in remote locations for months at a time, with little in the way of time off or the ability to host wives in civilized environments, even for a visit. They've probably had tons of guys come through,. saying, oh, I can handle being away from the wife for 6 months, and then 2 months later, hat in hand, telling the boss that family comes first...

I told him that " oh well, thats too bad ". I mean, its not like this is a negotiating point, I'm married, cant pretend I'm not married, even for a flying job...haha.

A guy I hired this year didn't work out, I need someone to replace him fairly quick. I usually ask my pilots to work for me for a minimum of one year, and I usually don't hire married guys, but I'm willing to make some exceptions.

Not like I'm set up to accept a year-round position in the town he was located in, but wow, that would be something.

I told him I am only up here for the summer, that I have plans to be back home in the fall, that I wouldn't be able to take on a year-round position.

He went on to say that that was ok, that this year, he had a need for someone just to fill in for the summer. He'd waive the year-round commitment, he'd waive the married thing, since I had explained I was already away from home for the last two months and the wife and I had planned for me to be away till the end of summer in any case.

He spelled out a few more particulars about the job, housing, pay, and a few " interesting " personality traits of his boss that he felt it was better I knew right up front.

We talked about the float time I had acquired and some of the details about the kind of float flying I had done during training. We also talked about my present employer, since he knew him, knew my current bosses father in fact.

Then the magic words.... " the job is yours, all you have to say is yes ". I said yes. I mean, I can't really turn down an honest-to-god full-time flying job.

" how soon can you start? ", says prospective new-boss.

" well, " I explain, " I couldn't commit to anything before July 15th, as I will have to give my present employer some notice "

" Thats a long time. I need someone pretty soon, what with the training I will have to do, and our busy season approaching. "

I explained that I didn't really have a lot of leeway here, that 2 weeks notice was the least I could give my employer.

Prospective boss laughed and said he agreed, that it was only reasonable, in fact, he went on to tell me a story about a guy he had interviewed, also gainfully employed by someone else at the time, and the fellow had said " I'll start tomorrow!". To which he had told him " this interview is over ".

I explained that I would not be able to speak to the boss till the following afternoon, in order to give my notice, but that I would check and see if they had any possible replacements lined up already, or if they could spare me any sooner than the two weeks notice I would be giving ( two and a half weeks actually ). He said that would be fine, send him an email with some references and we would talk tomorrow afternoon in case there was an earlier start date I could offer.

I talked to the boss the next afternoon after the days flights. I let him know I would be leaving and that I had gotten a flying job and who it was with. I told him I would appreciate it if there was any way they could do without me earlier than the 15th. He said sure, they would start looking right away, and if there was a way, they would do it. He was very understanding, I mean, I can't turn down a flying job, thats the nature of the game...

I immediately called new-boss back, as he was looking forward to my phone call as he was going out of town for the weekend and asked to call instead of emailing him, after giving my notive.

" Hi New-Boss, its me, just wanted to let you know that I've given my notice and that so far, its the 15th, but if they can get my replacement any sooner, I will be able to start sooner than that. "

New-Boss: " Sorry, too late, thats just not good enough, the 15th is just too long for me to wait. "

New-Boss " Best of luck in the future. "

After giving my notice to my current employer, not five minutes earlier, I was back telling him the whole sordid story and that I was officially rescinding my notice.

He found it as bizarre as I did. Thankfully.

My current boss was actually good enough to offer immediately, that he would cut me loose sooner if thats what it would take to get me into a plane. I decided that my first flying job was worth groveling for, so I called him back and let him know I could be there in as little as a week if that would make the difference. He told me it was too late, he had another guy calling him back in a minute and starting in a day or two.

I suspect he had kept going down his list of resumes, even after we had spoke the night before, and found someone who could start sooner, and just hadn't got around to telling me. Instead, letting me give notice to my boss and then call him back ,to be told I didn't have the job at all. What if my boss was less than understanding? I could have been left with no job at all!

I'll be honest, I was really disappointed. For a million reasons, this opportunity could have have really sped up this whole painful process for me.

In the spirit of sour grapes, however, I found a lot of reasons to be thankful for this not coming together.

He wanted me to stay on till at least the end of October, which meant extending my summer away from the Lovely Wife... Not a good prospect for me, especially when we are already trying our damnedest to make this work.

He spelled out a bunch of strange and possibly difficult personality traits of the owner, whom I'd be living in very close quarters with for the rest of the summer.

He wanted me to bail on my present employer with little or no notice. He talked a big game about not doing this, but in the end, he proved unable to join me on the high road.

He acted like he had never offered and received my acceptance fo his offer, less than 24 hours prior. What else might he " pretend " not to ahve agreed to or offered?


So, there was my excitement for the week.

Still wish I had a proper " flying " job, but I'm still thankful for the job I have.

I feel ready to take the next step into actually flying full-time, even though I know I have a lot left to learn. I know this summer will do wonders towards taking the snoopy-shine off my newbie-ness.

At the same time, I also know that biting off a bit more would be a bit more of a satisfying challenge for me. That eventually, I need to be cut loose on my own if I am really going to start learning.

At the end of the day though , I have to admit, as cheesy as it sounds, I'm feeling pretty good about maintaining some integrity.

I remember reading a quote once " Integrity is the ONLY gift that a man is capable of giving to himself ". I think I did the right thing, even if it " cost " me a job. 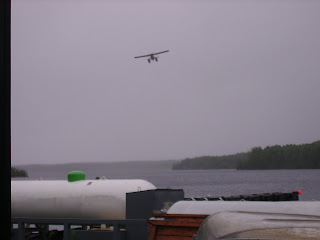 Had a terrible weekend for weather, we were socked in all day yesterday, with planned trips out to the camps being canceled, and return trips for guests already in-camp having to be cancelled as well.

We finally got a few flights out today and cleared most of the backlog. Only one delayed group left planned to go out for tomorrow morning and luckily, the weather is forecast to clear up overnight, so it should be good.

Spent a lot of time over the last two days hanging out with the guests. Luckily, the type of people attracted to this type of get-away are usually pretty good and easy going type of guys. By the time they get all the way up here, most of the guys are pretty laid back, and in holiday mode. They understand that we have no control over the weather and I think they see us making every possible effort to get them out.

While we were waiting around this afternoon, waiting for the weather to clear, saw an interesting sight.

There seemed to be a seagull who was was sort-of diving for something, as he had one wing up in the air, while his head looked like it was underwater, rooting around or fighting with a fish.

Afrter about 10 minutes, with his head still underwater and his wing getting a little frantic in its movements, we started to wonder if the fish he was after hadn't got the better of him.

All of a sudden, the seagull disappeared under the water.

We assumed that a Northern Pike, ( a " Northern " ) had gotten him, as they are well known to be aggressive predators. Theres tons of stories of guys catching a wall-eye and while they are reeling it in, a big Northern comes along and eats it, only to get the hook now stuck in it, and two fish landed on one hook.

None of us had ever seen a fish take out a gull, so we were all pretty astounded and searching around for any signs of the gull.

After about 10 minutes or so, the gull surfaced, dead as a doornail.

We were stunned when it started slowly moving across the water, towards our dock.

Thats when we noticed a small mink, swimming alongside it, towing it!

It hadn't been a fish at all, a mink had taken the gull and dragged him underwater, drowning him!

I got a little video of the now-dead gull being towed towards our dock.