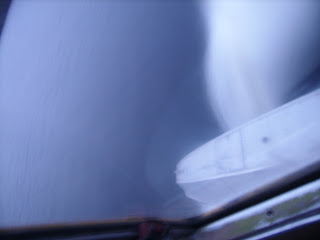 Wow... we've had a couple of days off recently, mostly just slow days where no guests are booked to come in or out of the camps and we've done all the housekeeping work around base, so we're cut loose at 10AM or just told the night before that we have the next day off.

At first, I kind of looked forward to upcoming days-off... but recently, its been a bit of a challenge to stay suitably distracted.

I like fishing.. but you can only fish so many days a week... we've got our of fillets in the freezer, so our grocery subsidizing is done....

We've been to town a few times now that we have a ar here. We even went out in search of a bar, with limited success. We eventually found one, but it wasnt quite what we had been hoping for.

There was a large " community notices / activities " board up at one of the parks we drove by, I've been meaning to go back and see if there is a local slo-pitch league or poker night we could join. We laughed at the ' Meat Draw - This Thursday! " sign down at the legion...now I'm wondering that might be fun. 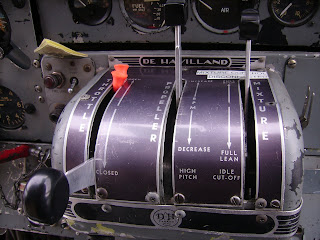 It would be nice to hook up with some of the local pilots /dockhands, as I imagine we're not the only ones who have come to town for the season, not knowing anyone else. Our base is just a little bit out of town so that just going for a stroll into town isn't an option. We joked the other day that this was the first time any of us had actually given serious thought to going into town, hitting the bar and trying to pick up some dudes.

The Lovely Wife and I spent a year and a half living overseas in a small town, and I remember going through this over there as well. We finally met a few people and it snowballed from there as you met their friends and the friends of their friends. 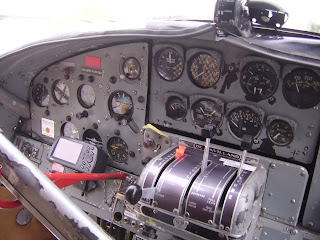 The other day, I went out with the morning flight and was dropped off at one of the camps to do some maintenance while the aircraft was off picking up and dropping people off. Most times, someone is riding along, other than the pilot, to try and do some odd jobs around camp while the new group is off-loading and the old group is loading their gear up onto the plane. This usually affords the spare person a good half hour or so to go and chainsaw up some firewood, pump some boat gas into the storage tanks, weed whack the camps that have lawns, or other odd jobs. This time, I was dropped off in the morning and was to be picked up again on the afternoon flight, so that I could do a few jobs that had built up at this one camp.

Most of my morning was sent chain-sawing firewood, which is actually kind of enjoyable. It can be a challenge to find a dead tree, standing or fallen that is dry enough for the guests to split with an axe, once I've chopped it up into manageable pieces, and not so wet that it is rotted and won't burn .

When we did camp openings, we would fall a few live trees so that they can lay for season nd be dry and ready for bucking up the following year. Otherwise, you have to range quite far from the cabin to find a suitable standing-dead tree to chop up. Once you've cut it down, and made it fall where you want it to, now it has to be cleaned up, all the branches cut off, and then bucked up into lengths that you can carry back to the woodpile area. The length can be determined by the distance that you have to haul the bloody thing, the further you go afield, the smaller that chunk of wood better be, but the more trips you're going to have to make!

Back at the woodpile, you can then chop it up into suitable stump-sized chunks that the guests can split with the axe, into firewood for the stove inside. With the weather being quite cold the last few weeks, the camps have been going through quite a bit of firewood. Once summer really kicks in, hopefully that will slow down. They also have an outdoor firepit at each camp, but the guests are usually asked to collect and burn deadfall rather than the hard-won firewood.

My other project was to rip up and repair an old section of dock. I was given a chainsaw, a can of nails and a hammer. I'm no carpenter ( see below ), but I think I did alright winging it with limited equipment and no one around to give me direction. 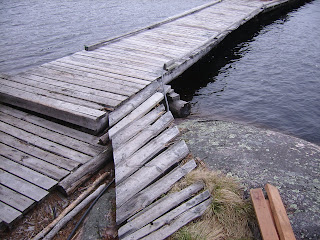 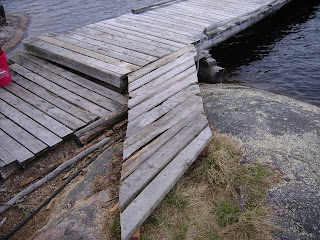 Oh.... one more week till I get a week off and am heading home to see The Lovely Wife!
Posted by 5400AirportRdSouth at 1:53 PM