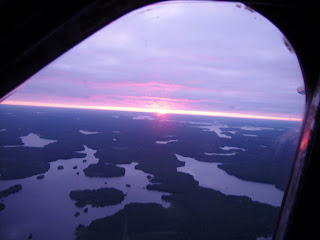 Had an interesting little experience this week..

We went on a charter flight a couple days ago, to an area we dont normally fly over. I was along for the ride and there was some new territory to check out.

On the way down, I was actually looking for signs of the recent Tornado we had in the area, and I got a couple shots of a swath or two of downed tree's. 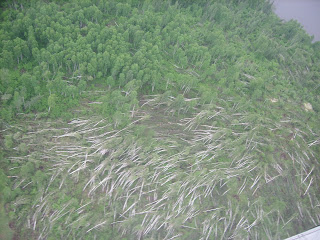 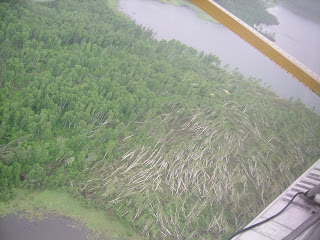 Couldn't find the destroyed outpost lodges though where the injuries and deaths occurred. 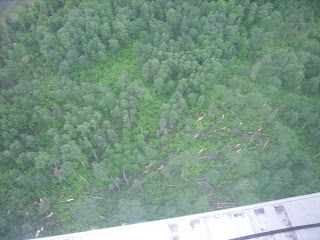 I also noticed a Red Ford Explorer sitting a few kilometres off the main highway, in a gravel pit, near where they were doing some construction on a bridge. I remember looking down into the windshield to see if I could catch a construction worked from the bridge project sneaking in a nap. I do remember it looked a little out of place there, but then also thought that it was near enough to all the construction commotion, that if there were really something nefarious going on, that the crew would have already soused it out.

Didn't think much about it till the next day when I was driving into town with one of the owners and her we got to talking about a recent case where a woman had checked out of a local motel on Sunday morning and hadn't been heard from since. This was on Friday.

I told her of the SUV I saw off in the sticks and we decided to check the flyer as soon as we got back to base.

We pulled back into base and there was an OPP ( Ontario Provincial Police ) cruiser parked next door. We offloaded our stuff and the officer walked over. He had a flyer in his hand and was basically going around to all the fly-in lodges and making sure we had all the info to pass along to our guests.

I gave him the location and he got all my details. We even scoped it out on Google Earth to see if I could spot the gravel pit from there, but the resolution wasn't high enough in that area. The officer talked with his superiors on the phone and at one point I spoke with the head-honcho of our area on the phone as well. I was able to give a pretty specific location, but other than that, I didn't have much to add.

Next day, ( yesterday ), I saw a little blurb in the news that they had found her vehicle, and right where I had described seeing it. Wow, it was hers after all! I kind of thought it would turn out to belong to one of the guys on the construction site or something.

Now, today, they found her, alive even!

Six days after checking out of her motel room, they found her a little ways away from where her truck was found. Covered in bug bites apparently, but relatively uninjured. I'm very interested to find out what happened to her. Maybe stopped to use the " off-road facilities " and stumbled off a embankment into the river? Who knows!

I'm pretty chuffed as well that I had a small part to play in helping them locate her as well. Obviously, my role had more to do with dumb luck than the kind of dedication and effort put out by the searchers and police, but chuffed nevertheless.

I actually had a few moments the day before yesterday, where I started thinking terrible what-if scenarios where my not reporting it for almost 24 hours cost the poor woman her life. Truth be told, I had only heard a brief snippet of conversation about the case prior to that flight and had no idea they were looking for a vehicle. However, the thought did cross my mind briefyl while I flew over the truck...it being out of place..there being a missing woman... but then I brushed that aside for what I figured would be the more likely scenario of a construction workes nap hide-out.

Had a couple of days of nice weather, which sure goes a long way to making a hard days work more enjoyable... 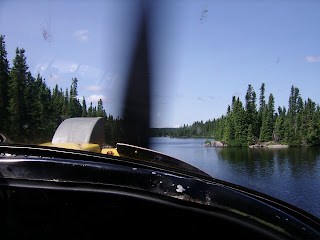 Looks like we got a few days off this week, and whaddayaknow..the rain is due back for the rest of the week. Oh Joy.


According to the map...there should be a tower around here someplace... 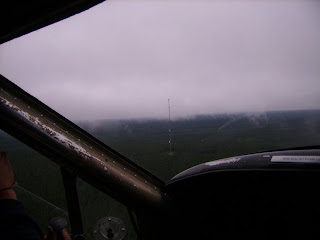