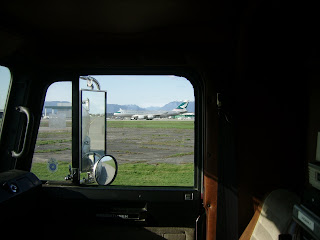 The Lovely Wife and I were discussing which of our two digital cameras I should take with me for the summer.
I wanted, of course, to take the new one, a 10MP Sony Cybershot with a billion gig card and a nice fancy case.
The Lovely Wife wants me to take our coupla-year old Samsung 5 MP samsung digicam.
We ended up flipping for it and I lost. But I convinced myself today that I won. See, ever sine we got the new camera, I realized I haven't taken very many photos at all. I mean, we take it with us whenever we're going somewhere photo-worthy, like a birthday, or an hike or something, but as its in a big bag and it has a lens on it, so you can really slip it into a pocket, we never really have it handy.
Particularly at my job, I cant lug the big one around at all. In fact, its kind of frowned on to take photos of some people or their planes. Most people at the airport do it to some degree, but when a celebrity comes in, its a fairly big no-no to be snapping photos, even if your just wishing they would get out of the way so you can take a picture of the cool plane they arrived in.
Now that I'm getting ready to leave as well, I realized how few pictures I have of stuff that a lot of people I know, wish they had the chance to take pictures of. I kind of take it for granted I guess, seeing as how I'm there every day, but now I'm starting to think I'm going to miss it as soon as I'm gone.  So I'm glad I got the small camera, I'm going to try and keep it with me and fill this up with a few more photos and less drivel.
Seeing as how I spent the day working, let me take you through a few things I did / saw / took pictures of today; 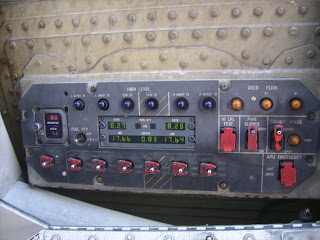 This is the fuel panel from an Airbus A300.
On the top left is the pre-selector. The top number is how many thousands of pounds of fuel I want to pre-select as the total amount to have on board ( total uplift ). The bottom number is how many thousands of pounds are on-board.
The crew, or their dispatch folks will tell me, " bring it up to 52 ". Which means they want me to put make the total amount of fuel on board 52,000 Lbs. So I would select 52.0 On the pre-selector, and then the computer would automatically shut down the loading once that number is reached. These particular ones don't work very well I find, so I don't actually use them, I shut it down manually once I see I've reached the total. It can take a half hour to forty-five minutes to fuel this thing, trust me, I've got nothing else to do.
The row of blue lights across the top, are the high-level shut-off indicators. They tell me the tank is full and the computer will ( should ) stop taking fuel into that tank. The auto-shutoff part has failed before, so when I see a blue light, I manually shut a tank down, just to be sure.
The orange lights further over to the right, are the overflow indicators.  This is a big plane, from where I am standing, under the belly of the thing, I may not be able to visually see the area where the fuel vent/overflow valves would jettison extra fuel. So these lights will tell me....so will all the ramp guys running around yelling and frantically pointing at the other wing....that and the fire trucks....
The big red switches on the right side are for testing the high-level shutoffs, switching from External power supply to Battery power supply ( if the ramp guys haven't plugged in the plane, I can get power from the battery to run the valves and stuff ) and for shutting down the APU in an emergency. I assume if there was a major fuel spill, we could shut down the APU right away and kill the power to the plane, without running upstairs to tell the crew.
The green lights in the middle tell me digitally how much fuel is in each tank. This particular plane has 5 tanks, two in each wing and one in the centre.
The switches down below, guarded by the red flaps, control the valves to each tank. I can set the system on Auto and leave the switches as they are. In this case, the computer will allocate fuel to each tank as it sees fit and I don't have to do anything but set the total pre-selected uplift amount. Yeah right, in a perfect world.
I can also flip those guards up and run the switches manually, flipping them to either open or closed positions based on where I want the fuel to go. This customer also has set limits below the high-level shutoff amount where they do not want me filling past. Once you go to manual mode on any of the tanks, you have to do all of the rest manually as well. I like manual better anyways, gives me something to do.
This aircraft has the trim tank disabled as well, that's why the red hatching around the switch.
The customer also has very strict rules about the fuel imbalance they will accept. If I put more than 150 lbs more in one tank the the other side, they have to transfer fuel over before they will allow it to go. So I juggle the valves while I load and make sure all the tanks end up as close as possible by the time my total is reached. Again, gives me something to do.
Once I've loaded the amount that dispatch ordered for this flight, based on their weather planning, winds aloft forecast, estimated cargo / passenger loads, temperature, route and possible delays, then I go in and see the crew before I disconnect from the plane. Pretty good chance the captain will ask for another thousand or even couple of thousand pounds more fuel...just in case. ( I call it granny fuel... a lot of time ,they are ordering additional fuel even before they review the details of their flight or the weather, in which case I know they are just being "grannies " ) Sometimes the crew has discovered an unserviceable part of their aircraft as well, and it will affect the fuel burn or the broken bits means they need more runway to stop and therefore have to plan to a further alternate than dispatch calculated for.
Easily 6 out of 10 times, I load more fuel after the initial planned load. 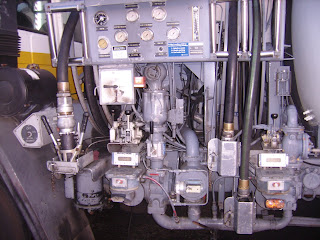 Here's the side view of the loading hoses on one of the truck. The big hose with the two black handles on the far left is the Single Point hose. High pressure, high volume, fast, clean. Like.
On the right hand side, are the two over-wing nozzles. Still pretty fast if you pull the trigger all the way, but a lot dirtier, with fuel being sprayed in , there is always a little drip here and there or a little splash back if I'm pumping too fast. Not like so much.
Problem with the overwing too, is that it doesn't shut off like your car when it gets to the top of the tank.  I don't know exactly how the car one works, but I think it has to do with the pressure feedback received at the hose end. The tanks we're filling quite often have no filler " neck " or tube, and instead we're simply pointing the nozzle directly into a large open tank. I think the shut-off doo-hickey needs a tube that will feed-back pressure once its full. So, when someone invariably orders " full fuel ", its up to the fueller to peer down the dark tank opening, around the large filling nozzle, and try to watch it closely and shut off pumping before it overflows.
Some planes are worse than others and give you little or no warning. Full means, fill-er-till-you-spill-er.  But a lot of it is by feel...the sound of the fuel going in will change as the tanks fills, their might be a bubbling near the top, and some just let you see the level rise.
haha, so much for less drivel..... oh well.
Posted by 5400AirportRdSouth at 10:59 PM