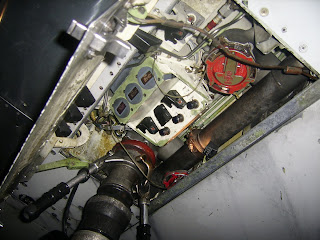 So I'm starting this new job pretty soon. But I'll also be leaving my old one.
For the past two years, I have worked as a Line Service Specialist. AKA Fueller Guy.
I work at a large international airport, as a line crew member. Most people call us fuellers as that's what they mainly see us doing, but we do other things as well.
I work at an FBO. a Fixed Base Operator, sort of a gas station / private terminal for planes.
The big commercial airliners use the main terminal buildings and pay the airport authority for the use of a gate and some check-in counters for their guests and their planes. It works out well as they need jetways, lots of room, and some serious people-moving / sitting / waiting / shopping / eating facilities.
For all the other planes, the little 3-4 seaters, the private jets, and even some smaller charter outfits, they need somewhere a little more their speed.
Enter the FBO.
We can provide a place to park your plane, ground crew to handle marshaling, loading/ unloading / ground power / vehicle parking / hangarage / catering and a lot of other stuff as well.
As a Line Crew Member, I will do just about all of the above tasks. When your dispatcher calls in, I might talk to him on the phone and take down the arrival / passenger details. When the pilots radio in ( they're GOOD pilots, they radio in to give us an in-range / 10 minutes-out call...), I might talk to them on the radio, call a couple cabs for their passengers and get things ready for their arrival. I'll set up a spot for them up front and get all my gear ready.
When they pull onto the ramp, I'll marshall them into position, chock their tires and roll out a carpet for them and their guests to step down onto.
Once their guests have been escorted into the building and their luggage attended to, I'll check with the pilots and see if they require fuel or anything else. I'll tow their aircraft into the hangar if requested, fuel it if needed and get rid of any trash.  I'll also pretend it doesn't bug me a little when they throw out their old coffee onto my nice clean ramp. Or dump the ice-bin out onto the ramp in the winter, meaning I'll have to sweep up those cubes later or else deal with them until.....February.
And, I'll do a lot of fuelling as well.
Its been a great job so far, working with airplanes all day long, outdoors. Something new to learn every day. Getting to poke around airside of a big airport and be able to do things that a lot of people could never get to do. Getting up close and personal with a lot of big aircraft and meeting / talking to their crews.
I'll be taking the summer off from this job to work my dockhand /pilot job, but I hope to be back at it in the fall.
The photo above is the fuel panel of a Boeing 727. There are three tanks, one in each wing and one in the centre.  Each tank has its own valve, operated by a rocker-protected switch and its own gauge, indicating contents.
Most fuel tanks have a high-level shutoff as well that will automaticlaly close the valve once the tank is full.
They also have vents that will spew fuel out at a very impressive rate. Usually there is means to test the high-lever shutoff before you begin fuelling to try and avoid the spewing part.  Sometimes those vents are over where you would normally stand as a fueller. Until you spewed fuel one day...then you would not stand in that particular spot anymore.
The fuel hose you can see hooked up there, is a single-point refuelling system. its designed to supply fuel under high pressure, at a single refuelling point and fill all available tanks through some sort of fuel manifold.
The other type of fuelling, is Over-Wing, and thats like you get at a gas station, we open your fuel tank and spray the fuel in from the top. Most planes have more than one tank though, so we have to fill each one seperately. This can take a while if the tanks are large. Thats why most larger planes, designed for quick turnarounds at airports, will accomodate single-point refuelling, just because its faster.
That and it makes me love you. I'm not a big fan of standing over a hose spraying a fine mist of hydrocarbons and anti-icing additive into the air that I have been known to breathe from time to time...
Posted by 5400AirportRdSouth at 10:33 PM