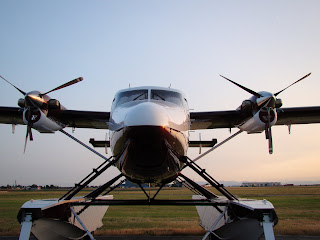 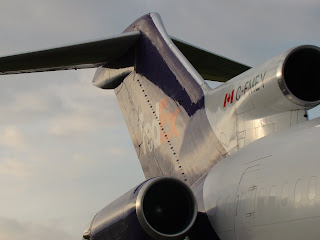 Off to the Sim tomorrow.
You know, Flightsafety, down in Houston. Yeah, pretty cool. Probably going to do a few touch and go's with the 747 and maybe see what an airbus can do.
Yeah right. But I do have 5 hours of instrument training that I need in order to complete my licence. I actually need 8 hours or so, but I can do a total of 10 in a simulator. Or, Flight Training Device ( FTD ). I did 5 hours already at the school where I did all of my training, unfortunately, there is a certification issue with the particular model/year/percentage of mildew on its circuits, that Transport Canada has decided they can only do up to 5 hours towards a higher licence...sigh.
So, I'm going to another flight school across the way to do a few sessions in their sim tomorrow ( more bells, shinier whistles, apparently ) and knock off this last requirement for my licence application.
The remaining three hours or so of instrument training I will do in the airplane, which is where I'd rather do it anyway. Thing is, the airplane costs around 170 / Hr for instructor and airplane, the sim runs around 80 bucks.
I''ll probably book a night flight this week, go up and do it all in one shot, a nice little night cross-country trip, haven't been up at night for awhile.
Most of the instrument work I do is pretty basic radio-navigation stuff. VOR tracking, NDB tracking, and not much else. As I'm not doing an instrument rating at this point ( no instrument approaches to a lake ), approaches, holds and other IFR-relevant stuff doesn't really do much for me.
Don't get me wrong, any training is good training, but at this point, I have to focus on the relevant stuff for me, which is what I'm going to be getting this summer. The IFR will come later. I learned this one while studying towards my CPL written as well as a couple other exams I took.... there is a LOT of technical stuff in this business to learn, sometimes, you really need to focus on the NEED-to know and get to the rest when you have time. ( or brain-cells left to devote to info that you don't immediately need! ). As much as I like to learn, by the time I really NEED to know all the stuff I learned about trans-sonic boundary layer and shock wave separation, I will have re-tasked those brain-cells to hold stuff like "don't stand up in the canoe".
My sister is in town tomorrow, so I'm going to go out nice and early and meet her downtown for breakfast. I had a couple beers today at a birthday party(mine) / BBQ  and so I ended up napping when I got home. Now, I cant sleep and have the faint remnants of a drank-to-little-to-get-drunk-just-enough-to-get-the-side-effects headache.
I want to try and post lots of pictures on here, hopefully that will actually make me TAKE more pictures. I always think I have bazillions of pics, till I go looking for ones to share. My ration of cool-pictures to worthless-scenery and non-impressive-airplane-porn is really really low.
I also get stalled out every once in a while, I really want to sit down and write a blog post, but then cant think of anything to write about.  I get caught in a trap thinking it needs to be current and relevant, when I could probably re-hash some old stories and you wouldn't know the difference... So, to remind myself, I'm going to try and write up an entry for;
My long XC trip last year
My Prospecting Trips
Some car-stories
Episodic Classification System
Ok, aspirin is kicking again, lets try sleeping again, got to get up in 5 hours.
Posted by 5400AirportRdSouth at 12:04 AM