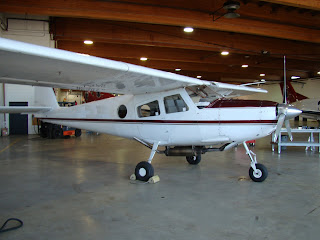 Saw an open hangar the other day and this thing sitting inside.


I remember seeing these things in the movie " Air America ", but I seem to remember them as being tail draggers.

The pilot was getting ready to take it up flying so I had the chance to chat with him for a few minutes.

This guy has The. Coolest. Job. Ever.

Basically, he works for a major US broadcasting company, and they pay him to fly this aircraft around filming sports events. He does a lot of US Football and of course, they sent him up here to cover the Winter Olympics.

There is a camera operator who sits in the back, working the expensive camera mounted under the left wing.

It was kind of incongruous, seeing all the fancy A-Star helicopters, with ball-turret camera mounts hanging off the front and stuffed with so much high-tech gear that some of the seats had to be removed...and then this guy....

Don't get me wrong, I love it. I think this is a brilliant solution to the problem and most likely extremely cost effective compared to the heli-cam operators.

He also burns AvGas, as this is a piston engine aircraft. From what I saw, he was one of maybe a very small handful of people at YVR burning AvGas during the Olympics. The fuel supplier that provided him with fuel could have easily just given him the keys to the their AvGas truck, the only time I saw it move was to come out and fuel this bird.

Oh, and he can get 10 hours endurance!!! Which he needs on occasion as he has to reposition this aircraft all over the US. At approx 100 Kts, its going to take a while to get across the country! 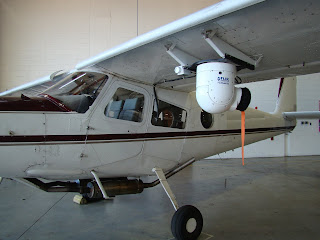 While they were fueling, I also noticed that he would leave one of the four tanks empty, on the side that had the camera mounted under the wing. I assumed this was to balance out the weight of the camera apparatus.

The coolest thing though that caught my eye was the fact that he has retractable leading-edge slats.

Leading edge slats are a high-lift device, used for changing the shape of the wing to make it more efficient at low speeds. 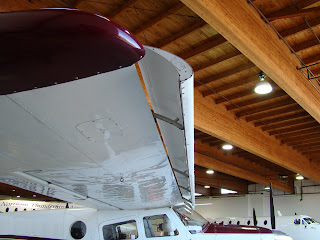 Most large airliners have them. On take-off or landing, they will be extended, along with the trailing-edge flaps, to change the shape of the wing. On takeoff and after accelerating, the flaps and slats are retracted to make the wing more efficient at higher speeds.

The Helio however, has no use for massive hydraulic systems to operate the slats, so they came up with an ingenious solution.

The slats are basically mounted on sliding rails. When the aircraft is standing still, gravity causes them to fall " out " and be extended. Once the aircraft is moving, and operating in the low-speed area ( where the slats are required ), gravity and the relatively low force of the air hitting them keeps them extended.

If the aircraft accelerates and is no longer operating at " low " speeds, then the slats are no longer required and are in fact hindering further acceleration. The higher air-flow hitting the wing at higher airspeeds however, pushes them up against the leading edge of the wing and holds them up in the retracted position!

I pushed them with my hand and they move very easily, say dishwasher-drawer type of force required.

Sorry, I think that is so awesome. I love a simple engineering solution.

According to the pilot, the retraction / extension speed for the slats is actually the same as the stalling speed for the aircraft.

So yeah, flying a cool aircraft, down low, by hand, over sporting events, all over the US and Canada.

It was just him and the camera operator as well, no support staff or management types hanging around.

I didn't ask, but I imagine he gets a serious amount of flying hours as well.
Posted by 5400AirportRdSouth at 10:58 AM