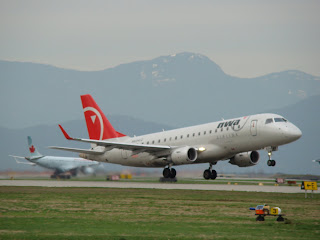 Wow, so much has happened in the past few weeks. I don't even know where to begin.

In fact, I've been unable to properly string together a post in almost a week of trying. Theres three or four half-baked entries loitering in my edit-bin. Victims of me getting started and running off foaming at the mouth and trying to tell fifteen stories at once.

I'm going to try a new tack, as my usual 8-page run-on rambling entries are actually starting to intimidate me. I feel bad for you, having to read them..

I'm thinking I might try and pre-bake a few entries and then go in and " release " them on a little more regular basis. When I get the urge to sit down and churn out some words, I have no problem spitting out five or six pages of drivel. So, instead of sticking one title at the top, I'll split it into six different entries. We'll see how it goes.. 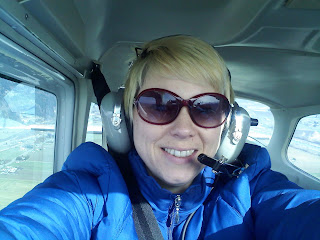 First big piece of news..... We're having a baby! Yup, The Lovely Wife is pregnant, three months pregnant to be precise. We've been trying for a while and things finally clicked just before Christmas. 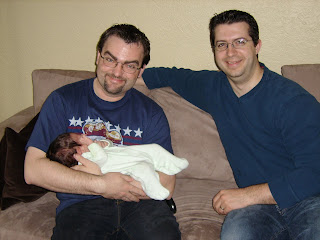 This is one of my younger brothers and his baby. That's me holding Joel and apparently channeling Salman Rushdie.

Excited, Terrified, Nervous, Busting-out happy. I'm trying not to dwell too much on it, as I know there are going to be some major changes coming up, for both of us and the direction of our lives. But I think it's going to be one of those things better handled as-they-come and not to get too worried about trying to wrap a master-plan around everything.

Still looking for flying work, or any other new challenge on Aviation that scratches the itch.

Not that I've given up on finding a flying job, but the reality of my situation, my qualifications, the aviation industry in general, the industry in Vancouver in specific and the economy overall, dictates that I might need to focus on finding something that will build my skills and experience, and at the same time allow me to earn a living.

Since I know that chances are I will be here in Vancouver for at least the next year, I've started looking into a couple new directions.

- Flight Dispatching
Something I've found interesting in the past and would definitely challenge me on a whole new level. Not that my current job isn't satisfying or challenging to a degree, but the level of new challenges and learning on a daily basis are significantly lower now that I have a bit of experience.

- Flight Instructing
This one requires some funding to get an instructors rating, and no guarantee that I will find instructing work at the end of it. I think I would be good at it, given my previous " teaching " experience in Japan, and of course my passion for the subject at hand.

- Para-dropping or other part-time work
I suspect the opportunities here are a little limited, but if I could find something part-time, that would allow me even just enough flying to allow me to keep my skills current, I could tough out a year on the ground a little easier.


haha, there I go off into the wild blue babble-yonder.... I said I would keep it short and on-task....and now it's nothing of the sort...

I'll have a few entries worth of photos and stories about the Olympics, so I'm not going to go too far into them right now. I'm still awaiting the O'Hangover to clear before I can tell if people are calling the games a success or if my prediction of a flop was accurate. I suspect I may have been slightly off....I was surprised, both pleasantly and unpleasantly on more than one aspect of the festivities...

This wasn't the Olympics, but rather the ferry lineup sometime in the last couple years. I thought his performance worthy of note.