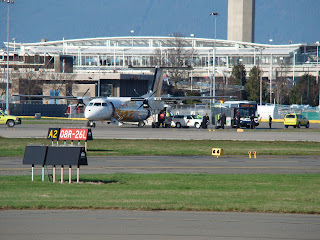 Saw this happen the other day and had the camera handy to take a couple pics.

A dash-8 sitting on one of the taxi-ways for a long time, with other departing aircraft being routed around it for quite some time. Finally, the dash shuts down both engines and some buses and airport authority vehicles come out to meet it.

Passengers offloaded onto the buses on the taxiway and eventually, the aircraft was towed away.

We were actually using my camera as binoculars it has a pretty good optical zoom, to try and figure out what was going on. 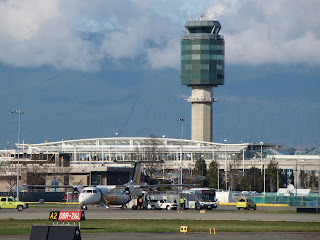 Originally we thought the nose-gear was twisted 90 degrees off centre. There is a nose-wheel steering disconnect on the exterior of the dash-8's nose that you have to pull out when towing it. One theory was that they had forgotten to reconnect, or it failed mid-taxi, causing the nose wheel to suddenly lose directional control.

When we zoomed in with the camera it became obvious this was not the problem.

We spent a few minutes trying to come up with a theory that would fit having to shut down and offload your passengers in the middle of the taxiway and hold up all kinds of operations, instead of simply taxiing back the gate.

This post was actually going to just repeat the same questions we were asking, till I realized I could probably find out.

Checking the photo-file properties I got a date that I took the photo. Using the aircraft type, location and date, I searched the CADORS database and bingo.


In Canada, the Civil Aviation Daily Occurrence Reporting System ( CADORS ) is a great way for NavCanada and other agencies to quickly disseminate information about a safety or regulatory issue without waiting for drawn-out reports, committee's, meetings or royal commissions.

If you do something wrong while practicing Aviation in Canada and someone saw you, chances are you will be the subject of a CADORS.

A CADORS doesnt neccasarily mean there will be any enforcement action. You may not even know that a CADORS about you even exists, unless your friends find it, and post it up on the bulletin board....
Posted by 5400AirportRdSouth at 1:04 AM