E is for Emergency 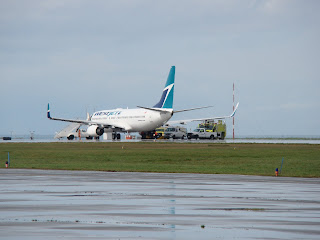 We have a prettty clear view over to the fire hall on the other side of the field, so when they roll the crash trucks, all the flashing lights usually catches someones eye. The call on the radio on our end is usually that " someones getting a parade ". I like to grab one of the handheld Icom radios and tune into Tower frequency and listen in. The ARFF ( Aircraft Rescue Fire Fighting ) trucks will usually position themselves at the arrival, mid-point and departure end of the runway where the parade-recipient is landing and once they are down they will go onto the runway and follow the aircraft.

If it's a real emergency, the aircraft usually stops on the runway. If its an emergency of the faulty-instrument-bulb variety, then they will follow the plane to the gate and then go back to the firehall.

When it's the real deal, the fire trucks will relay to tower a discrete frequency for the aircraft to speak with them directly on, so they can coordinate shutting down engines, putting out brake fires, evacuating or de-planing passengers and what not. 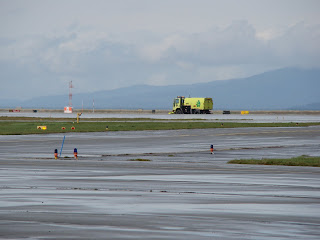 In this particular case, it was a rejected take-off caused by birds being ingested into one of the engines causing the engine to fail quite spectacularly. There was a loud series of bangs and a couple big puffs of smoke. Then they sent out FodZilla, our airport's resident street sweeper truck, to clean up the mess on the runway. If you look closely, you can see the big FodZilla sticker on the side of the truck.


E is for Eating

A favorite pastime of mine...and something I routinely get to do in the airport environment. We tend to get a fair bit of left-over catering off arriving aircraft. Especially the larger aircraft that transport sports teams. If there are 40 people on board, there are 40 Chicken and 40 Fish meals, along with snacks, drinks, desserts. If you are chartering a transport category aircraft for only 40 people, the catering bill is the least of your concern. The crew already tucked one away in their luggage for the hotel room and since you helped them get their gear out of the cargo area, tidy up the cabin and run them to the hotel, you'll usually get a stack of the meals, a tray or two of cheese, meats, desserts and whatever else they have for your troubles.

One of my neighbours just completed his flight-attendant training and they happened to do the on-aircraft portion of their class at our FBO. I ran into him a few times and took the opportunity to " train " him myself on the important aspects of line-crew / flightcrew relations and upkeep thereof. Give the food the the lineguys before the catering trucks show up and pitch it all in the garbage and you'll never carry your bags down the air-stairs yourself again.


E is for Engine Start

When we're marshalling out an aircraft, one of the more important things we're doing is helping to make sure engine start is done safely. The part most people see is all the arm-waving when the planes are moving to or fro their parking spot, but for the most part, the pilots know where they are going. The marshaller is really just there to watch out behind the plane, where the pilot can't see and assist in tight quarters to make sure they don't run into anything. I've talked to some guys who are quite convinced they are running the show when they get a hold of a couple lighted wands, but I know better. We are an added layer of safety, like chocks on an air-brake equipped truck.

Once the passengers and crew are aboard, the marshaller takes up position in front of the nose of the aircraft, in eye contact with the captain, who sits(usually) in the left seat. When they work their way through the checklist to the part where they want to light up an engine ,they will hold up one finger or two, depending on which engine they want to start. The marshaller will signal in return by pointing to the concerned engine with the wand and waving the other wand vertically, over his head in a circular motion.

Engines are numbered 1 through whatever, usually just 2, but in theory, as many as 8, starting from the captains left, or the aircrafts left wing. 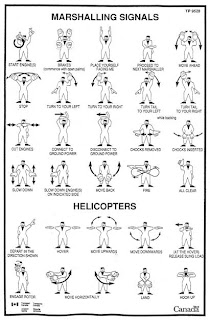 The marshallers main job during engine start is to make sure there is no one passing behind the aircraft and that the general area is clear. if it isn't safe to do so, the marshaller will hold the wands up, crossed in an X, indicating to hold off on starting. Unfortunately, this whole dance is so routine, that it can be hard to get the pilot to stop. They are expecting you to indicate all-clear, you have the last 100 times. More than once I've requested a stop, had eye contact with the pilot while indicating not-clear, and have them carry on and start up anyways.

The other function during engine start is fire-watch. A lot of fuel is moved around during start and not all of it gets burned. Some aircraft actually leave a little puddle of unburned fuel on startup or shutdown. The marshaller needs to be ready to signal the pilot in case there is any type of fire. Its one marshalling signal that a lot of marshallers don't actually know as they probably learned it once and then never used it again.... I suspect if you used the proper signal they wouldn't know what the hell you were trying to say. The look on your face though would probably give it away. I think I would resort to basic (frantic) hand gestures if I got any sort of confused look from a pilot if I ever had to use that particular marshalling signal.

Someone just mentioned to me the other day that the mechanics that were on trial for the crash of the concorde in Paris were found guilty of manslaughter recently.

Basically, an American Airlines aircraft that departed before Concorde, left a part of some kind of the runway. That part, once run over by Concorde, proceeded to be deflected upwards at highspeed, puncturing the wing and fuel tank just before take off. Leading to a large in-flight fire, crash and the death of all aboard and the end of the Concorde altogether.

I would like to think of France as being a civilized country and I sincerely hope that if there was negligence on the part of the mechanics, that it was gross negligence in order to find them guilty. I'd hate to think there was simply pressure to scapegoat someone. Particularly given the clientele that usually rode around on Concorde. The cynic in me wonders of those particular passengers and surviving families might have a bit more sway than usual... I'm all for being accountable, especially when your job demands it by its nature, but it seems easy to take it too far sometimes.
Posted by 5400AirportRdSouth at 12:00 AM