D is for Diesel 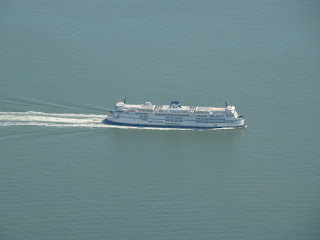 This is a little out of order, as this happened a few months ago, but I just found the pictures, so bear with me.

Over the summer, I went for a fun little flight with a friend of mine from work, Bruce. Bruce recently went to one of the local flight schools to renew his Private Pilots License and in the process, got himself checked out in the schools shiny new Diesel Powered 172. 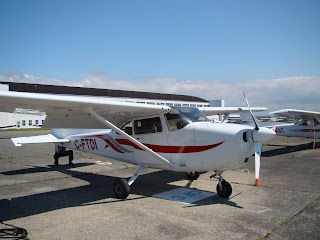 Most 172's run on AvGas ( 100 Octane, Low Lead - 100LL or AvGas ), but this one has a diesel engine in it and it actually runs on Jet-A, Jet fuel. Jet Fuel and diesel and very similar, in fact I think the only difference is diesel has some added lubricants in the fuel, where Jet-A is quite a bit "drier". You can run Jet fuel in a diesel powered vehicle ( don't get me started, but you can run almost anything in a diesel!! ) but its not recommended for repeated or prolonged use. I suspect diesel fuel will run just fine in a jet engine as well, except for the small problem of it voiding manufacturers warranties and requiring six-figure engine rebuilds to satisfy re-certification....details... 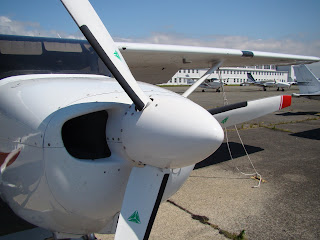 It is also a very new airplane, and has what is known as a FADEC system. I'm a little fuzzy on the details, but I think its Full Authority Digital Engine Control. Essentially, its fuel injected and a computer runs not only the engine and fuel mixtures, but also the propeller RPM to coordinate different power settings as well. I think it does a few other wizard-y things as well. 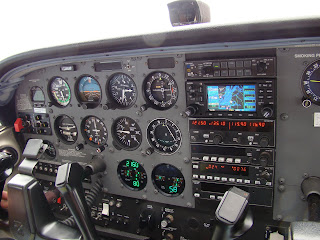 One of the neat little tricks it does is a push-button run-up. Get yourself set up in the run-up bay and hold down the run-up button and it goes through all the checks on the engine and gauges for you, giving you a green light when its done. cool.

Except that it does the run-up at full power....yikes.

It has a constant speed prop, but with the FADEC system, you'd never know it. You simply set percentage of power required on the throttle and the wizards match engine and prop power output for you.

We took off out of Boundary Bay and flew up the coast to Powell River, an airport Bruce hadn't been to before, but I had been into a couple of times. 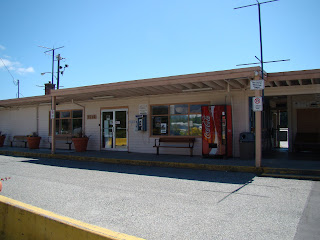 A fun trip and a chance to fly with someone I hadn't flown with before. ( I reciprocated a few weeks later and posted the details of a trip to Qualicum in one of the ultralights, in case he looks familiar ). 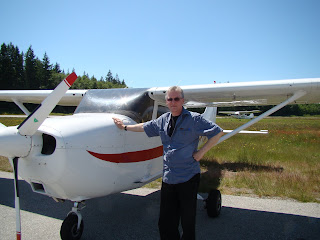 We didn't do much at Powell River, mostly hung around the airport watching this guy do long-line practice with a helicopter. 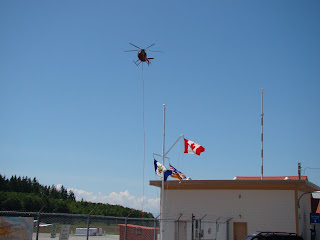 It was kind of funny actually, he called up on the radio after we announced our arrival intentions about 10 minutes out, but neither of us caught that he was a helicopter. Once we got into the circuit, he checked in again and said he'd be " over the threshold of XX runway ", which confused us..till we spotted him and it all became clear. 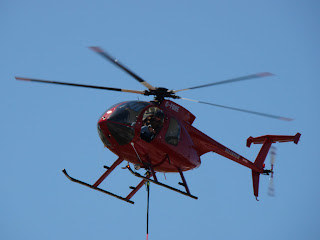 On the way back, we came across a new Diamond TwinStar in flight and they asked us over the radio if we had a camera on board. I replied that we did, and we proceeded to take a few nice air-to-air shots of it for them. 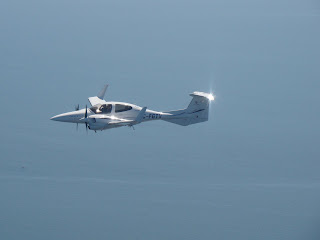 This is the same Twinstar I later took a look at for doing my MIFR in. Shiny. 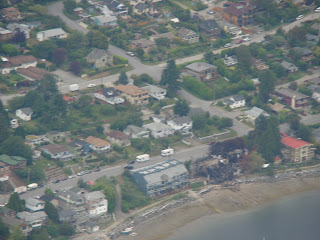 A local Hostel and Machine shop in Gibsons also had burned down the previous day, got a picture as we flew over, but it didn't really turn out. 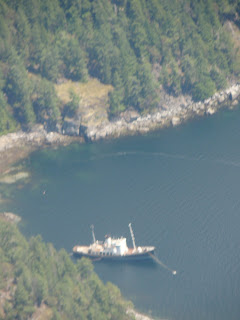 D is also for DI's

A DI is a Daily Inspection. Done on all our Fuel Trucks by the Day Shift folks. I used to work Day Shift and used to do the DI's as well. When you get your commercial drivers license, one of the big things that you have to do and show an examiner that you can do, is a pre-trip inspection. A DI is essentially just a pre-trip, but since our trucks are in continuous use all day, we basically just do one big "pre-trip" at the beginning of the day. I remember in the driving test they give you a set amount of time, twenty minutes I think, and they warn you five minutes before time runs out. Not that all the requisite items aren't being checked, but the Test pre-trip and a real-life pre-trip are two very different animals. On the test, you're under the truck with the coveralls on and inspecting frame rails for cracking. In real life, its a flashlight on bended knee.

My Airport pass is a "D" pass, it allows me into the airside restricted area, and it also allows me to operate a vehicle on an active taxiway, runway or apron. It requires a security check, a radio operators license and a driving test with the airport authority. Another type of pass is a D/A, which allows vehicle operation airside, but only on the ramps and vehicle corridors and service roads, no driving anywhere that requires a clearance.


D is for Ducks

We've got a lot of them at our airport. A major river delta along a migratory path, go figure. The airport authority has a few guys in trucks whose job it is to drive around all day and scare of the ducks, geese, hawks, eagles and other wildlife. They've got all sorts of noisemakers, sirens, firecrackers and lights to keep the birds away from the runways. I had one pop by the FBO one night when I was working graveyards and he showed me all the gear they give him.

There was a pistol in the console of the truck and a shotgun in a rack as well. I thought they used them to fire off the firecrackers, but they were the real deal and he said they do use them. Particularly if the bird is nesting airside, they tend to get the short straw as there is little reasonable way to keep them from coming back I guess.


D is also for Dirty Diapers.