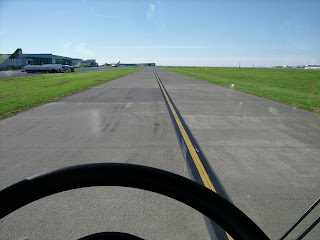 I was going through my bag the other day, and found my little digicam languishing at the bottom, amongst a pile of paystubs, plastic safeway lunch bags and all the other stuff that just sort of piles up in my little work-backpack. Every once in a while I go through it and am just amazed at some of the stuff I have been faithfully carrying to and from work for WEEKS.

Anyways, found a few pics on the camera that I hadn't posted before, so thought I'd clear them out. Here goes; 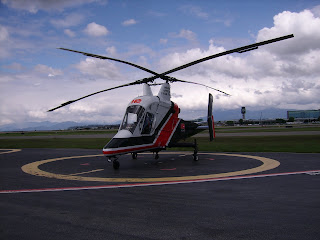 This is one of the goofiest looking machines I have come across, but apparently its quite the performer.

I like the eyes in the front window too, nice touch. 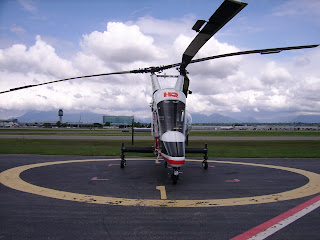 This part just blew me away though. Out on the trailing edge of each blade was what looked like an aileron to me. I pondered it for awhile and then saw the pilot and asked him about it. 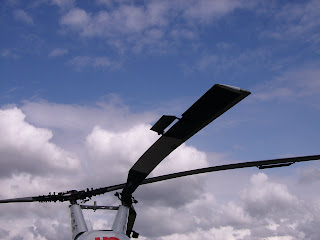 Most Helicopters, ( Read: all of them, except for this one. ) control the pitch angle of their blades by means of "twisting" them from the base outward. Imagine the blade spinning around the hub and in/on the hub is a cam of sorts that lifts ( increases the angle of attack ) the blade as it goes through that section of the spinning disk. So, you want to increase lift on the left side of the disk, the mechanism ( because I don't know its proper name ) lifts each blade as it passes through the left side, and lets it back down again once its passing through centre. Net effect is the left side creates more lift and the disk tilts. Neat.

You can do the same for the front side and back side of the disk as well, tilting the plane of rotation fore and aft as well. The helicopter tends to follow the spinning disk as well, it doesn't have a lot of other options.

Helicopters represent a sort of arcane, dark art to me, so I am both intrigued and intimidated by them at the same time, similar to higher math. Why the square root of some things can be so remarkably and beautifully elegant as the solution to a problem boggles my mind, much the same way as voodoo and yogic levitation.

In any case, back to the little aileron out there on the spinning blade. When the pilot(wizard) so wishes, he can, by deflecting the aileron into the airflow as the blade is spinning, cause an opposite reaction to the long skinny blade. It twists. So the cam system must still be at work, causing the aileron to rapidly deflect and un-deflect depending on which side of the disk you wish to have more angle of attack, but it is the same effect as the system everyone else uses. But totally different. 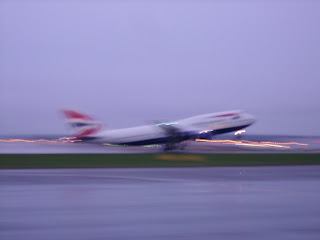 I like how the big jets kick up some a fantastic trail of moisture roaring off a wet runway. Seeing the jet blast is pretty impressive, being able to actually take a decnt picture would be even more impressive...c'est la view.

Of course, with the 727's, you don't need a wet runway, you can just watch the black smoke pouring out the back. Or, as someone put it on Avcanada the other day " a trail of David Suzuki tear's "


This thing came in a few times over the summer, I can't remember the name of it though... t-something trojan? Not sure... 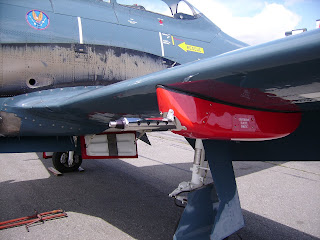 Rumour had it that it is owned by he owner of Harbour Air and is a toy. It certainly parked on their ramp while it visited, who knows... I like the "guns" they added as well. 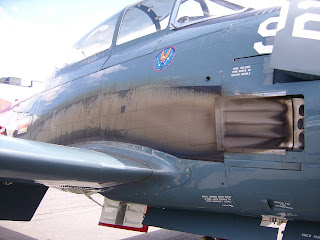 Apparently, as told to me last year, the Wright Cyclone engine is actually the very same engine as the PZL-ASz-62IR, 1000HP engine that a few DHC3 Otters have been converted to, including the one operated by the fishing lodge I worked for last summer. 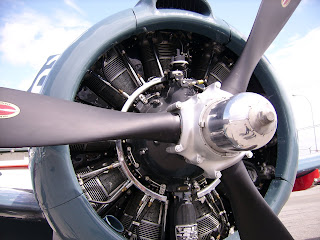 The story was that under some backroom post-world war two deal, the Wright company ( yes, Orville and Wilbur ) sold the rights to PZL in Poland for the production of this engine and it has been produced with great success and in fantastic numbers since. 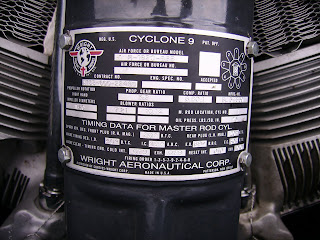 The other story I heard was that the Poles made a fantastic version of it, slightly improved from Wrights original design, but once they were under Soviet control, the soviets began production of their own PZL 1000HP engine with much less success, but even greater numbers. Apparently, if you get on with blue paint instead of Polish Grey, you have a Russian made Polish engine. Theres a joke in there somewhere I'm sure.

Oh, here is a picture of one of the Ultralights I was flying while working part-time as an instructor out at the ultralight field. 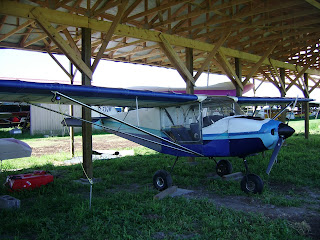 And here she is as of Tuesday afternoon. 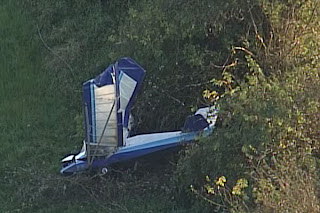 Luckily, it sounds like no one was seriously hurt, a few cuts and bruises apparently and the plane is a write-off.

The story I heard was that the carbon-fibre prop de-laminated on them just after take-off and some or all of it departed the aircraft without further ado. They tried to make the field but clipped the power lines on approach. The Chief Instructor and a student were on board at the time. I haven't been out to the field for a while now so I haven't yet had a chance to talk to them and hear it from the horses mouth.
Posted by 5400AirportRdSouth at 10:34 PM