B is for Bush Planes 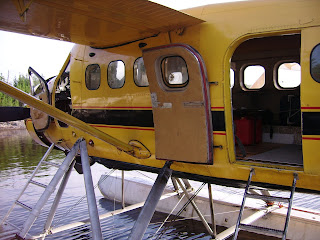 Not much for Bush Planes in my daily life these days, but hey, you never know!

One of the qualities of a good bush plane is it's STOL capability. STOL is short for Short Take Off and Landing.

In my ultralight flying this summer, I gained a lot more respect and a little more knowledge about Short Field techniques. Our field is technically 1200 feet long. Given the obstacles on both approaches, the usable runway is actually closer to 800 feet. Seeing as how the aircraft we use need only 300 or so feet for takeoff or landing, its not that bad. When you are used to 800 feet long by 20 feet wide, coming in to land at one of the local airports where you have 5000 feet by 100 feet of pavement stretching out before you, it almost seems silly.

For those not familiar, Short Field technique calls for landing the aircraft on a pre-determined spot ( close to the beginning of the "short" field to make use of all available runway ) and coming to a stop as quickly as possible, while remaining under control. Bonus points if the aircraft is usable again after you are done.

Mainly, it means making sure you you use the manufacturers recommended settings for flap and approach speed to come in at as slow a speed as is possible. Depending on whether or not you are also dealing with an obstacle on the approach path, you might also be coming in at a steeper-than-usual glide path, necessitating a more aggressive and hopefully well timed, flare.

With the slower speed on a short-field landing, you shouldn't have to deal with a lot of "float", the mains should touch down positively on the spot you aimed for. Dump the flaps to put some weight back on the wheels and get on the brakes.

Except we operate on grass and one of the planes I fly doesn't even have brakes..haha.

Grass is nice because its natural friction does a good job of slowing down the aircraft quite well. All three of our planes can be landed without using any brakes on the rollout, but thats on a perfect day.

D however, is for Digress, and thats a few days down the road.


B is for Brakes

At the FBO, after we've greeted the arriving pilots and passengers and made sure their immediate needs are attended to, we'll always ask the flight crew to make sure the brakes are left OFF before they leave. This is because they are usually directed up to the front of the building when they come in, so they can feel like rock-stars. Eventually, we will have to tow them off to some forlorn corner of the ramp to sit till their allotted " on-line " time before departure.

It's quite difficult to tow an aircraft whose parking brake is set on. Not impossible, but difficult. Most of out tugs have the capability of pulling a small to medium sized corporate jet with locked-up tires, across the ramp. Not from personal experience, but I do know that they leave quite a tell-tale rubber track from dragging the tires.

Personally, I like it when we hook up the tug and physically check that they are released even before the flight crew has left the premises. Even if you ask them to make sure the brakes are off, sometimes you go to tow it away an hour later and find out their partner went back and re-set them, or they weren't off in the first place. Sucks even worse when its three in the morning and you need to clear the ramp for the morning arrivals and you're having the crew woken up at the hotel to come down and release the brakes so you can tow it away...this I do know from personal experience.

Some companies even have a little sign they put up in the cockpit window that says " BRAKES OFF ". This is like.

I also noticed that aircraft brakes differ from car brakes, in that there might be 10 separate slave cylinders and disc brake pads per tire. On a car, you have one hydraulic slave cylinder and one set of pads to squeeze against the spinning disc.

I'm going to speculate that its a redundancy thing, no single cylinder to fail. Or perhaps a cooling issue, where its easier to cool ten small pads instead of one large one.


B is for Block Passes

Ramp access is pretty tightly controlled at major airports. All employee's requiring airside access need to get vetted by Transport Canada, the local RCMP and your friendly airport authority as well. This generally consists of a police check in each of the jurisdictions you've lived in for the previous five years, a criminal records check, a credit check, a fingerprinting and I believe they also run your name through the CSIS computer as well. There was CSIS form in the packet of stuff I filled out for my pass, but it's been awhile... Once this comes back clean, you get whats called a RAIC pass, also referred to as a Red Pass. RAIC is Restricted Area Identification Card. There is your photo on the front and both a magnetic swipe strip and a embedded chip on the back of the card with some biometrics for some of the gates ( retina and fingerprint ). The RAIC can also be upgraded with a "D/A", a driving permit for driving vehicles on the ramp and a " D " which is the all-access driving permit, allowing access to the taxiways, runways and all the other controlled areas where you might have to talk to Ground Control on the radio. Useful for towing planes around and driving the fuel truck out to some of the remote stands and oddball corners of the airport. I just recently upgraded to a "D" :)


It's kind of funny, because a pilots license and an aircraft parked airside will also get you through the gates. Like a lot of things in aviation, once you can prove you have the money to afford to fly/own/rent/train then everyone just assumes you're OK. Lots of airports I have been to have pilots "lounges" with fridges stocked with pop and snacks and a mayonnaise jar stuffed with bills and coins for you to place payment in. I guess if you can afford to fly in there, you're not going to pinch the 42 bucks in the jar or help yourself to a free coke. Kind of an economic profiling thing going on....

Some people need airside access at the FBO and don't have RAIC's. Limo drivers and maintenance personnel are good examples. These folks can come to us and as long as they convince us they have a valid reason for needing to be out there, and surrender some information, ID and a credit card, they can be issued whats called a " Block Pass ". This is a "Visitors" pass that allows them and/or their vehicle, temporary, escorted, access to the ramp. Technically the Block Passes are still property of the airport authority and woe betide us if we fail to get them back from these people before they leave! Hence the surrendering of the credit cards....


B is also for Bush Planes

I don't get to see a lot of bush planes these days, but I do see a few. We have a few residents Turbo-Beavers, Dehavilland DHC-2 Beavers that have been upgraded and modernized to be powered by a turbine instead of a radial engine. 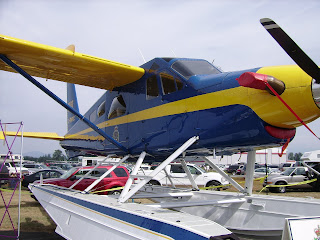 Last summer, the turbine aircraft were few and far between, everything was piston. Now, piston aircraft are fairly scarce, reserved only for the smallest " piss-cutters " and radial engines are even scarcer around here. 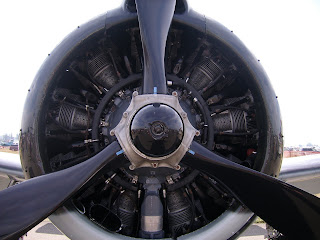 Side-note - everyone I've ever talked to here and even Ontario, has referred to the smallest of aircraft generically as " piss-cutters ". I googled the term to see the origin and it didn't really have anything that was in relation to a vehicle, aeronautical or otherwise. Mostly in relation to Marine's hats?! I've heard this term my whole life, I'm quite surprised by this.

Aside from the odd DHC2T ( T for turbo ) we see the venerable DHC3T Otter and DHC6 Twin Otters of Harbour Air and the now amalgamated West Coast Air around a bit. Not on our ramp usually, but occasionally we are called over to their maintenance hangar to do a fueling for the mechanics.

You can always tell when its a mechanic calling for fuel instead of a pilot, they always ask for fuel in Pounds, not Litres or Gallons. Usually they only call when they need to do a leak-test on the tank or fuel system, and the maintenance manual will specify ( in Pounds ) how much fuel needs to be in the system for the test. Since a Litre of Jet Fuel is almost 2 Lbs by weight, this can cause problems if misunderstood. 600 Lbs, mis-fueled as 600 Litres may not even fit in some of these machines....

One of operators on the field has even acquired a spiffy, brand-new Quest Kodiak ( similar to this one pictured below ) 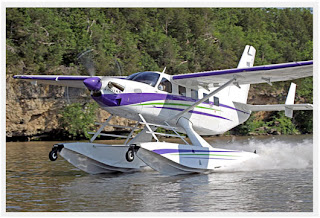 I've had a look at the Kodiak, its a neat plane, but the fueling system makes me skeptical about the plane in general. It's got two over-wing fueling ports on top of the wing. Over wing fueling on a high-wing aircraft sucks. It means dragging out the ladder and climbing up, dragging your fuel hose with you. The ladder has to be positioned carefully as when you add the fuel, the added weight will cause the aircraft to settle, hopefully not onto the top of your ill-placed ladder.

Some planes, like the Beechcraft King Air 350, have auxiliary fuel tanks that have to be filled from on top of the inboard portion of the wing, BUT, further back than you can reach from your ladder at the front of the wing. So, everytime this plane takes full fuel, some fueler has to climb on top of the wing, dragging the hose across the leading edge, potentially damaging the de-ice boots or the wing skin itself. Take a close look at the de-ice boots on any well-used 350 or 1900 and you will see patches where they have been repaired....guess where? Yup, adjacent to the fueling ports. Surprise!

I look at it like this. A plane is fueled pretty much every time it goes flying. The designers will boast about the durability of their product. 50,000 hours on a commercial aircraft is not at all unusual.

If their engineers have clumsy old me, or my rookie co-worker who just started yesterday, dragging fuel hoses up onto wings, walking over sensitive bits with their heavy boots, dripping fuel onto windshields, dropping the fuel nozzle onto even more sensitive bits, just to access their ill-conceived location for a fueling port.....what other ELEMENTARY logic has escaped them?? Sorry, I get to ranting on this one...

In any case... It looks like a good plane and it's neat to see a new generation of bush planes. We'll see where they are in the fifty or sixty years Beavers and Otters have been operating and then compare notes... 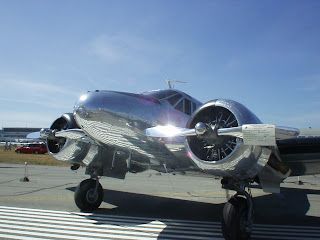 B is for Boats

Totally non-FBO related, but I did ship a few of these boats by Air Freight back in my previous life. They were for the German Police ( special forces ? ) GSG-9 and were sent down by truck to Seattle and then flown on a 747 freighter over to germany. 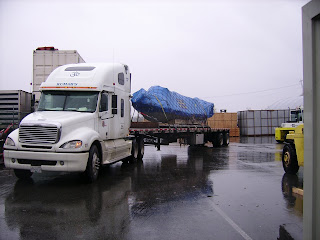 Loaded through the flip-up nose section of the aircraft. 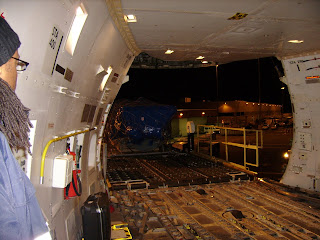 And secured on the main deck. Note how the upper deck floor reduces the height on the main deck in the forward section. Kind of a drawback on this plane. If your cargo is long, it goes in through the nose, if it's tall, it goes in the side cargo door near the back. If it's long and tall....sorry. Doesn't go at all. 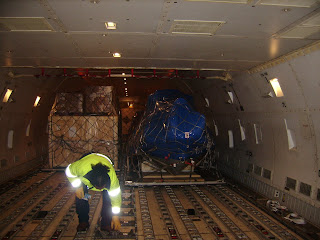