Ever wonder how float planes get around on dry land?

They use a piece of equipment called " Beaching Gear ".

Essentially a hydraulic lift mounted off the front end of some sort of vehicel so the float plane can be picked up from underneath, down on the boat ramp, lifted into the air and driven around.

Mechanics tend to like working in dry hangars, where all their tools are and they don't have to contort like gymnasts to balance on and work under, a float plane bobbing around at the dock.

We had some fun with that last summer when the Otter went through an engine change and a "splitting " of its radial engine, right at the dock.

Since the aircraft was not flyable, and we had no ramp nor beaching gear to take it out of the water, the entire operation was done at the dock. We did the best we could, with a large plywood maintenance platform placed between the two floats and under the engine and it worked fairly well. But.... theres a lot of oil that comes out of a radial engine when you open it up. So, we strung plastic sheeting up underneath the aircraft as well. Very handy to collect spilt oil and dropped bolts.

The first time we did it, sans plastic, we ended up with a small slick and yours truly had to go diving for parts and tools dropped into the lake at least three or four times.

I am considering heading down to the gulf of mexico and showing those bozo's what I can accomplish with little more than a container of Sunlight dish soap on shore-encroaching oil slicks, but I bet they will figure it out eventually themselves.

In any case... Near where I work is a few different maintenance outfits that do a lot of their work on seaplanes. All of them have at least one set of beaching gear. Its kind of neat some of the vehicles they have mated the lifting apparatus to. Theres at least one Camaro, an Oldsmobile Toronado and a couple other oddball cars as well. Standard practice uses an old half-ton truck that is getting long in the tooth, but its neat to see the creativity of the mechanics.

A while back, I witnessed a beaching incident gone wrong.

The beaching gear is usually placed under the seaplanes " spreader bars ". Horizontal bars that hold the two floats apart and provide lateral strength and stability. The spreader bars are fairly lightweight material ( like a lot of aviation-y things ) but get their strenght in the direction that it is required, by their shape. Like a cardboard tube, very strong if its on end, but can be folded with ease if force is used against it sideways.

Where the lifting platform of the beaching gear pushes against the spreader bars is usually OK, as they lift at the very edges, where the spreader bar attaches to the float itself. At this point, there is an inner piece which reinforces the tube, as well as giving something that you can bolt through the spreader bar onto, to actually attach it.

Unfortunately, if you don't lift at this point of the spreader bar and instead try to lift from a point further in, where there is no underlying reinforcement inside the tube..... Particularly while bouncing down an old wooden float ramp...bad things can happen.

If you look closely in the background, you can see a Beaching Gear-mobile made out of a Toronado..I think. The bars of the lifting platform project forward of the " car " and are just barely visible...They are blue and about fifteen or twenty feet long. 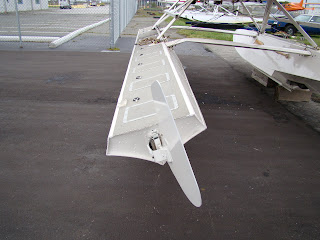 I know the Toronado was a front-wheel drive car so perhaps that why they used it, as the back half of the vehicle is sacrificed in making it into its new configuration. 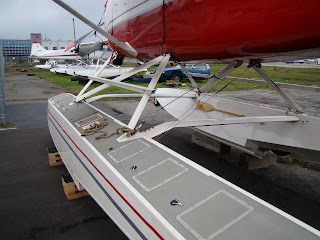 Oh, this is the same old wooden float ramp as well, being used by a Supermarine Stranraer of Queen Charlotte Airways back in the fifties ( possibly? ) 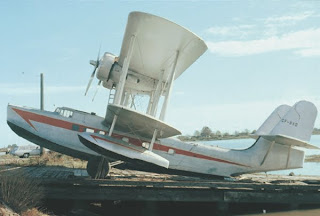 I love how this airport is full of stuff that has been around forever. Old hangars that have seen dozens of airlines come and go. Sometimes run by the same people, different planes and at other times, same planes, different people...

Until they re-paved it last year, you used to be able to drive over the old hangar door tracks of the Boeing Factory that used to exist here, a long time ago... 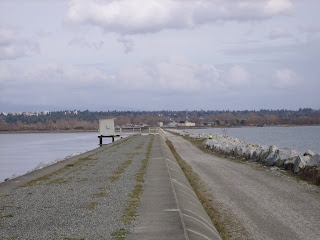 On the other side of the field is one of my favorite places to walk. Its technically a " jetty ", a breakwater made from rocks. But... for those in the know, its actually a treated water dicharge pipe which takes treated sewage water and discharges it about 4 kilometres out into the Strait of Georgia. The Lovely Wife and I used to run out here whn we lived nearby. I liked it because the trail which runs on top of the pipe as well as alongside it, is marked every half-kilometre. 4 out and 4 back, but I never ran the whole thing in one go. 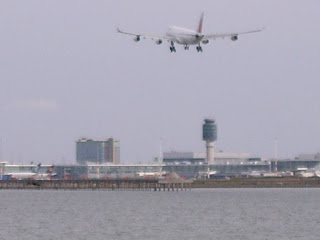 Oh, and the fact that it is right under the approach path doesn't hurt for a view either...haha.

One of my favorite aircraft types also came in for a surprise visit the other day too. 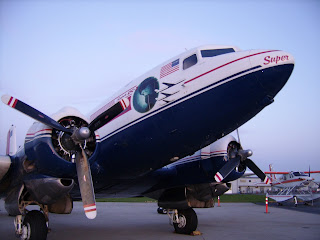 It popped in unexpectedly for a movie shoot in a nearby town and spent the night on our ramp before heading out the next day. The guys driving it were extremely gracious in giving me the grand tour. 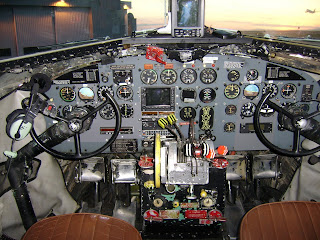 I think it made it even better that it is a working plane as well, not a gussied up show plane. The back half was crammed with spares, tools and of course, oil. Like any good radial engine aircraft, its " Check the Fuel and Fill the Oil please! ". 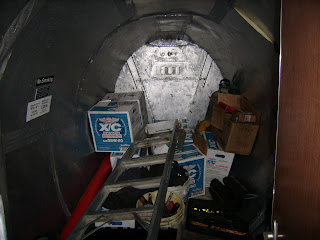 It took me right back to last summer as well as soon as I stepped in the door. All the smells of a working plane 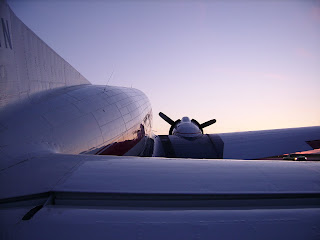