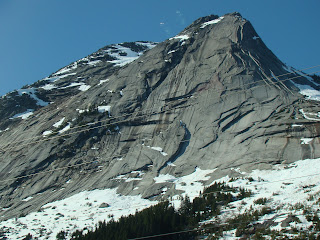 Got to go out on a little adventure today.

I had been talking to one of the guys at work about going flying one day and it came together this morning.

Bruce has his PPL and just recently went out to one of the local flight schools and got checked out in one of their new Turbo-Diesel Cessna 172's. In doing the check out he also renewed currency on his pilots license, since it had been 5 years or so since he last flew.

I need a total of 20 hours ultralight time in order to apply for my Ultralight Instructor rating so we thought it might be fun to take a little cross country trip.

Bruce was much like myself when I did my PPL. Most of my cross countries were pretty local really. We had got to talking at work about how much fun it is flying into new and unfamiliar airports and the whole planning process in putting together a flight to somewhere you have never been.

I'm trying to at least take the written and do a " flight test " for my rating prior to the end of the month. I'm feeling a little hard-pressed though as time and weather are slowly starting to come together to not make it happen.

We had planned on going out yesterday, but we didn't get the weather for our primary destination, nor for our back-up alternate. Theres only a few directions you can fly in out here when the ceilings start to come down.

Our original plan was to go to a little strip up near Merritt, called Quilchena. Apparently there is a neat old Hotel / Restaurant right across the street from the strip and MoGas ( Automobile Gas ) is available from a gas station that neighbors the field. There are pictures at our little flight school building of planes being pulled across the road by hand and right up to the pumps to fill up.

Since the trip up through the mountains requires us to be able to fly through at least one high mountain pass, we would have needed a minimum ceiling of about 7500 Feet Above Sea Level ( ASL ) for a safe trip. And that only gets us through the pass, it doesn't give us much for options to climb out of the valley as the mountain tops would still be shrouded in cloud.

When we got to the field yesterday we didnt even have close to that, in fact ,while we stood there discussing our back up plan, the rain started and within a half hour, our options had dwindled down to the highway to drive ourselves home on.

Back again this morning to try again and while it started iffy, it quickly cleared up quite nicely.

In fact, according to the weather map, there was just the barest hint of a High pressure area, right where our alternate was. It was only there on one of the GFA weather charts as well, the forecast chart prior to our period and after had the High pressure area downgraded to just another curve in the isobars around the Low.

One of the guys who hangars his plane out at the field accepted our invite to tag along and Bruce and I took the Foxbat, while he flew alone in his beautiful little Piper Vagabond. 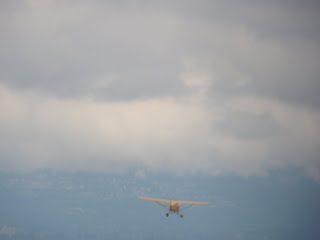 Basically a clipped-wing Piper Cub. He has upgraded the engine to ( I believe ) a 100 HP Lycoming engine, as well as a few other bells and whistles. A left side door for the pilot and a widened fuselage to accommodate two people in the front instead of tandem seating. He even has a small wind-driven generator hanging off the bottom that charges his battery and gives him Electrical power, something the original Cub lacked.

Off we went, up over the city and through the Downtown Harbour control Zone. I did a little practice with groundspeed checks and using the old whiz-wheel as its part of my upcoming flight test and something I havent done for awhile. 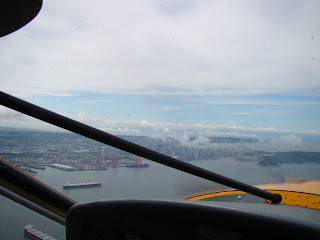 Bruce got some stick-time while I fiddled with a navlog and my trusty E6B. 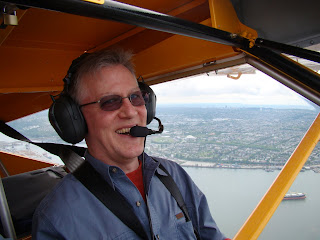 Give us a smile Bruce!

Through the Harbour and now its up over Bowen Island and along the coastline, north-west bound for the Sechelt area. 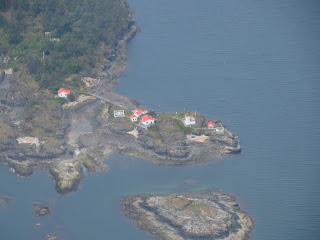 Past Sechelt and over a little 8 mile stretch of water between Buccaneer Bay and the bottom tip of Texada Island.

A little detour to check out a small, unpublished dirt strip that sits on Texada. Nice enough lengthwise, but I'm not too sure about the surface condition, would definitely be an emergency-only option till I had a chance to talk to someone who had landed there before, or better yet, walk the runway myself.

The forecast clouds over the island weather stations turned out to be pretty localized and we had clear skies over the Strait of Georgia to climb up and get some altitude for the 10-mile stretch between Lasqueti Island and Qualicum Beach.

I had flown over Qualicum once before on a sight-seeing trip with my brother Jason, up from Victoria. I was freshly annointed with my PPL at that point and when we went to land at Qualicum ( it wasn't our destination, more just to check it out ), the gusty crosswinds had me end up doing a low approach only. It was my brothers first flight with me and I was already scaring myself trying to make a steady approach, no sense scaring him with a not-so-steady landing. 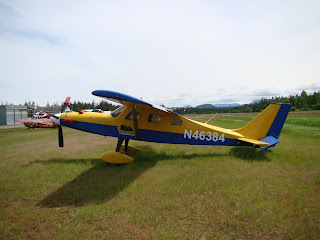 We taxied in and grabbed a couple spots on the grass, just off the main apron. An airport worker came out and very politely told us we wouldn't be able to park there, and directed us instead to another spot down the way. Another gentleman was with him with a clipboard that he was writing in. I thought to myself..." Oh, he must be recording our registration marks for a landing fee or maybe a parking fee... thats funny, I dont remember seeing any fee's in the CFS... ".

We parked over on the grass where they wanted us to and it turned out that the other gentleman was a Transport Canada Inspector doing a ramp check! He went through the whole thing with the pilot of the Piper that flew up with us and Bruce and I watched and listened from a polite distance.

I was a little nervous, figuring it would be my turn next, but once he was done with the Piper's pilot, he wished us all a good day and left. It was actually quite a friendly little encounter and not nearly as sinister as my imagination had it being. I've talked to lots of pilots who have flown for twenty plus years and never been ramp-checked, it was a first for all of us.

Over to the restaurant for a nice lunch out on the patio in the sun and then back from whence we came. 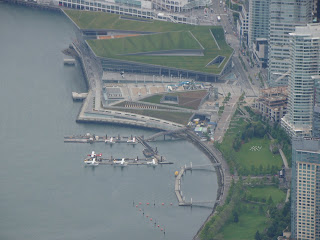 Coming back through downtown Vancouver, got to take a look at the floatplane base of the now-amalgamated West Coast Air / Harbour Air, as well as the Green Roof of the new convention centre. 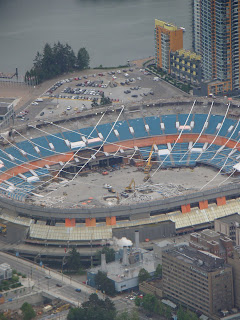 BC place has also had the inflatable roof deflated, to make way for the new retractable roof they are putting on.
Posted by 5400AirportRdSouth at 11:09 PM