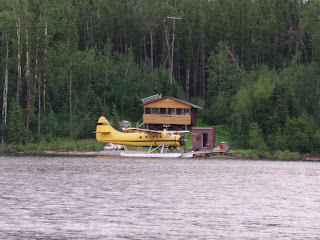 Definitely getting down towards the end of summer here. The leaves are even starting to change, We turned the heat back on in the bunkhouse last night, and this morning was definitely jacket weather.

Afternoons can still be quite nice when the sun decides to show up, which isn't all that often, Not scorching sun-screen hot, but hot enough to want to retreat inside once in a while to find some shade.

The fall is bringing us a lot of time between flights where there isn't much to do other than the big project jobs that have been held off all summer as they would take a day or more to complete. Dock repairs, boat ramp re-building, trail making, that kind of thing.

We went out the other day for an overnight trip as the job we had planned, a new dock section at one of the cabins, was estimated to take us the better part of two days.

We packed up all our overnight gear and sleeping bags, a cooler full of beer and our fishing rods. This time of the season we don't have to pack too much food as the cabins are pretty well stocked with leftover dry goods from all the guests over the summer. All we had to do was catch the fish and that was it. Not too hard to do in these lakes either.

This particular dock had been a big problem for us early on in the year, as it was too low and the high water in the spring gave us trouble in docking the plane to a dock that was well under a foot or two of water.

The water took its time going down as well, so the first months worth of guests had to contend with all kinds of difficulty in tying up their boats and negotiating their gear back and forth to the plane on arrival and departure.

The worst part was that once wood is submerged in these lakes for any period of time, they tend to get quite the coating of lake slime on them. A nice film of dirt, algae and who knows what else that is as slick as, well, goose shit. In fact, perhaps thats what it was. Carrying an armload of tackle boxes, coolers, sleeping bags and whatnot over what is essentially a greased board with ankle-deep water over top isn't pleasant.

The first step was to strip off all the old boards on the top deck of the dock. Then hammer out all the old nails so we could re use the boards themselves. Out comes the chainsaw and we knock down a few trees to be cut up and stripped of their bark to use as supports for the dock cribs. 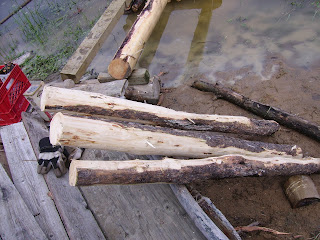 The dock cribs are essentially wooden boxes made by stacking the logs log-cabin style and then nailing them together with foot-long metal spikes. Since wood tends to float, and the cribs are meant to be the supports for the dock, a layer of thin sticks is inserted between one of the layers in the cribbing and rocks piled on top of the floor made of the thin sticks.

For further support, wire cable is wrapped underneath the floor inside the cribbing and wrapped around the top layer of the crib itself. The rocks hold the whole contraption down, resting on the lake floor. Eventually, the thin sticks that the rocks are piled on will snap once they start to rot out underwater, and the rocks will settle against the sticks and the sides of the cribbing itself. The sticks are now forced into the lake bottom, as well as the crib sides by the weight of the rocks anchoring it down pretty solidly. The cable, being underneath all this stuff before it breaks, is now held taut by the weight of the rocks and this pulls the loop that goes around the top, holding the whole thing solidly together. We peel the bark off the logs so that the insects don't have a place to live and the rot doesn't have anything to work on. The smooth, sap-coated logs will last much longer.

To peel the logs, we use a midevil torture device known as a draw-knife.

The draw knife is a knife lade that is laid horizontally, with a handle on each end, Straddling the fallen log, you “draw” the knife towards you on the bark and peel off great strips of bark. The tree had to be live so you get a nice wet layer of sap under the bark to make peeling it relatively easy. 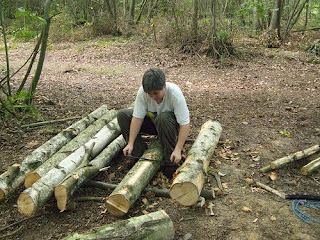 You only need to peel alternating strips of bare tree down the length of the log, the strips left on the tree will peel and fall off one their own now that you've stripped off half the bark. This is fortunate as it really is hard work and peeling the entire tree would be a bit of a chore.

The bark strips as they come off and the logs themselves underneath are really coated in sap. Your hands, arms and clothes gets coated with the stuff. The only real thing that will wash it off is gasoline, which actually works pretty good. Scrubbing down with gas is not too pleasant, but it beats being coated with sap. I still have little patches of sap that I missed that are like bits of bubble-gum stuck to the hairs of my arms and legs.

We also had to cut some long logs to act as the stringers, resting on top of the finished cribs, that the deck boards could get nailed to. These were tough as we had to fall them near the shore so that once peeled, we could float them over to the dock and then heave them up top to be fastened down with more spikes.

You need a fairly level surface so that the deck boards aren't all wonky as well, so the chainsaw gets used to shave down the high spots. Luckily we picked some really straight logs and it turned out quite good with minimal fuss.

We went full throttle on this job the first day in camp and actually managed to get the whole thing done by 16:00 on the first day.

Its wasn't raining ( very much ) so went out fishing for a few hours after that to get ourselves some dinner.

The mosquitoes were ruthless while we were cleaning the fish and frying them up in the outdoor fish cooker. After dinner though and with a decent little bonfire going and they went away.

Nice clear night and I got a decent view of the starts from the camp. I finally realized that after being up here so long, this was the first real chance I had to take a look at a clear night sky. Its far enough away from the brights lights ( ok, ANY lights ) that you get a nice view. You know you're in the sticks when the milky way is so obvious. 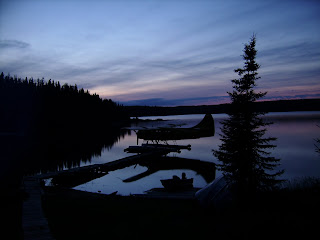