Got room mate #2 of 3 today. We drove down south this morning and collected him. Nice guy, young, tired, cold. He had to wait almost 3 hours for us, as his train dropped him off in the middle of the night...an early train...what will they think of next. The closest stop to us isn't even a stop. It is what you would call a whistle stop I guess. the train only stops there if there are people or freight pre arranged to get on or off. No station, nothing...literally, its a spot where the tracks cross a road, the train stops, they boot you off, the train leaves and you're all alone in the middle of the Canadian wilderness, at night, in the snow, with no lights and a deserted highway. Seriously, do you know how dark it gets u here at night??

I felt sorry for the guy...

We came back to base by way of the grocery store, and got stocked up on some basics to get us through the next week or so. Spaghetti, hamburgers, eggs n toast, canned beans and some salad fixings. Along with the essentials, coffee-cream n sugar. Beer store was closed, so we saved that for later.

Back at base, we had a couple hours to get some lunch in us then we had a few hours work around base. Mostly involving moving heavy,dusty things, over and over. Lots of canned goods to be shuffled about and boat motors to get staged for the summer festivities.

Once that was all done, we knocked off for the day around 4. Boss said we were done, so back to the shack. #2 passed out immediately, can hardly blame him. All the hard work had made me thirsty, so I decided to try walking into town to hit u the veer store. I also needed some hand lotion as the cold weather and manual labour was hard on my hands. You have to take care of your hands!

And yes, I realized walking up to the cash register in this small beer store / general goods store that buying two six packs of beer and a container of hand lotion could be misconstrued. She told me to " have a good night "....

We had briefly discussed walking distance to town in conversation yesterday with the boss and his wife. Boss said 20 minutes walk and the wife had laughed at him and shook her head. I suspected it was somewhat longer than 20 minutes.....

It was about 45 minutes each way for a 1.5 hr round trip, hiking it down the trail. You could walk on the highway, but its not any shorter and frankly, its dangerous. But I got beer. Beer is good. Beer make donkey walk. Beer make donkey happy. Beer cruel mistress.

They only stocked the basic Canadian brands too, there is a larger town and a larger beer store in the other direction, but its a hell of a lot farther. Donkey not that dumb.

Since I'm trying to live on a budget this summer, one that primarily consists of beer and food, I think I should try and reduce costs wherever I can. Food is easy, I can eat basic staple food and be happy. Oatmeal, spaghetti, potatoes. Donkey has a pretty simple palate.

The beers I normally drink are of the micro-brewish variety, so A.) the little beer outlets don't stock them and B.) they cost an arm and a leg.

I picked two classic brands and am trying to pick a good one to get me through the Summer. 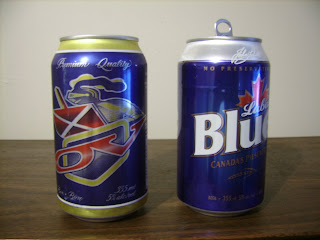 not bad, pretty smooth, reminds me of drinking beer at the neighborhood UI* Ski Team Chalet** back in my teen years...a not altogether unpleasant association, so far so good for Blue.

Ski Team ( and their house/Chalet ) = Group of UI collectors that typically host parties all summer instead of working. Typically shunned by working folk as they tend to live it up on Tuesday nights, seeing as they have lost all concept of bankers hours...

I haven't cracked one yet, I will get back to you on this one.

So the walk was a little on the long side. I don't think I would do that again, even for beer. Word is that room mate #3 is driving up and will have his car here for the season. Hopefully he can be swayed by Beer.

The walk was funny, in a sadistic kind of way. When I set out, I told myself I would walk the 20 minutes that had been rumoured the night before, and then see where I was or if town was in sight. After twenty minutes, sure enough, no town. Got around the corner of the trail and another long stretch stretched out before me, as stretches are wont to do. Told myself I would walk to the next corner, and see what I could see. That should take me to 25 minutes out, surely, at the least, the town will be in sight by then. Nope, just another stretch. 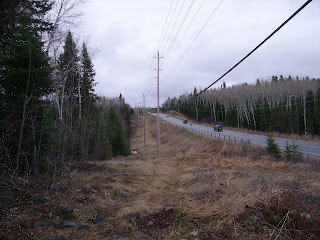 But really, I've only been walking for 25 minutes, lets make it around the next bend and take it to 30 minutes, that's only an hour round trip. Nope, no town, only another stretch of trail.

Hmm, ok. I'm 30 minutes in...what if it is around the next corner, I will have wasted an hour and a bunch of walking if I turn around now. Lets go one more. 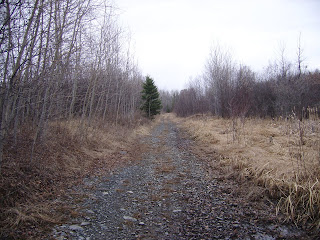 Next one, I started thinking what a tool I would look (more) like if I came back empty handed after walking for an hour and a bit. Eventually got to the metropolis, caught a commuter train to the suburbs, hopped onto light rail to get me downtown and then walked the last few blocks.

Actually, I asked a guy jogging by if he knew the way down town and he pointed me up the block and around corner. This is a town of a couple thousand people, servicing a single mine / mill and the amenities were pretty basic. They had Labatts Blue, so donkey was happy. 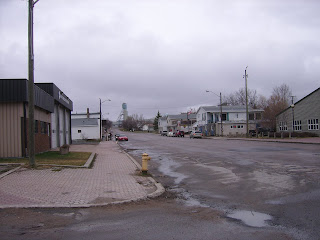 Back to base, took a shower and enjoyed a couple hard earned beers. Nothing tastes better than earned-beer!
Posted by 5400AirportRdSouth at 4:49 PM