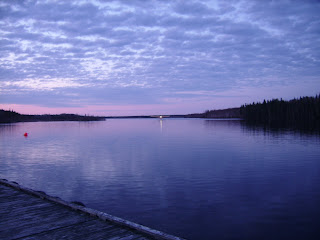 We've had it nice for the last couple of days. No camp openings, so we've stayed at base to assist with getting the planes and guests ready for departure and arrival. Most mornings have us up at 5 or 6 AM and out getting the aircraft ready, fueled, oiled, untied, loaded, floats pumped out and guests gear all sorted out and ready to go.

Most of our guests are Americans, up from the East Coast or Midwest, and most have been coming here for a long time. In the midst of all the stuff we have to do and get ready for, its easy to forget that for these guys, its vacation time. For the most part they are all in a great mood and very excited to be going on the trip and the ride in the aircraft as well.

We've had an interesting time today with one of the larger aircraft. We had an offshore wind blowing when it came in, so it was docked accordingly, but not in its usual spot. As this was the last flight of the day, it had to be maneuvered by hand along the docks and actually tuned around to be parked in its night spot. The wind pushing the aircraft was almost too much for us three greenhorns and it took a few tries and false starts before we got it in place. I'm sure by the end of the season, I'll laugh at what will most likely be handled easily by two guys that know what they are doing versus three that don't.

Up this morning at 0330 for a 0400 start, things starting to heat up with guest arrivals and change-outs now that most of the camps are full. Beautiful morning over the lake, sun rising and the loons and other birds making all kinds of noise. One you get over the first thirty minutes or so of wishing you were back in bed, getting up this early sure is nice. You just cant beat a sunrise or quiet morning sitting by the lake as the world wakes up. Its even nice enough this morning that I took my little netbook outside to sit on the deck and type this outside.

Speaking of the netbook, boy am I glad I brought this thing. Its been a real life line to the outside world for all of us in the shack( my new name fr our humble abode ). Most of the time it lives on the kitchen table and someone is usually using it, checking emails, reading interweb rumours and news, checking AvCanada and using Skype to chat with folks back home.

My Lovely Wife tripped yesterday and broke her foot. That's been a little tough, more on her than me obviously, but it kind of sucks to not be able to be there with her. She's got a cast on now and is adjusting to her new life as a cripple. We've planned a trip for her to come out here mid-june, so this might change things a little given that she is not going to be able to do much driving. Originally the plan was for her to fly to the nearest big city and then drive from there to here. Given my experience with the other forms of transport available, it seemed to be wise to learn from my mistakes... now it looks like I will have to drive to the city, be it in a rental car or in a borrowed set of wheels. One of the guys here has a car that is most likely going to be on-site soonish and has graciously offered its use to me, so that would work out well.

It will be nice to have car around base as well for us guys to use, its a little bit isolated where we are. We've met one guy who frequents one of our fishing spots but other than that, our access to the rest of town, and the pilot community that exists there, is quite limited without wheels. Even to get a little social group going would be nice. Doesn't have to be house parties and bar marathons, even a weekly poker game or some organized outdoor activities would be cool. 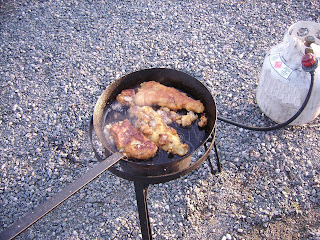 We finally had a fish fry last night. We had caught a few nice walleye at our secret spot yesterday and as their was no rain today, we got to try the outdoor fish-fry method of cooking them. Basically, the fish is filetted and then dipped in batter, to be deep-fried. The end result is not unlike your basic english fish and chips type of fish. Much better though, considering its walleye instead of cod... I mixed the first batch of batter a little of the heavy sde and didnt use quite enough water. ( actually, I tried using beer, with little difference in the result, so no more wasting of the precious suds ) As the batter was so thick, it soaked up a lot more of the oil than was intended and the first batch of fish was a little on the greasy side. We had a total of 4 nice sized fish ( 16-18 IN ) and were cooking for three guys. We were worried at first that we did not have enough, given how small the fillets looked on the plate pre-fry, but we only ended up eating half of what we had, the rest will be lunch for today.
Looks like summer is fast approaching in us now, forecast for this week is calling for mostly clear skies and temperatures up to 20 C, which will be nice. Typically Canadian, I will whine about he cold until it turns warm, then I will be happy for bout a week, till it gets hot, then I'll whine about the heat all summer till it urns cool for another week before the cold sets in.
Posted by 5400AirportRdSouth at 2:41 PM