Your file is uploading, please wait...... 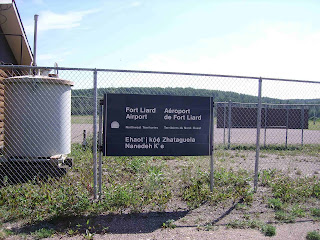 Went out the other day on a flight to Fort Liard, and ended up holding for most of the day in the community.

It was hot, like 30 degrees hot, and I had dressed for a relatively cool morning and still in bug-protection mode. ( pants and at best, a long sleeve shirt wit the sleeves rolled up )

I did get the opportunity to hang out a little bit with the husband of a husband-and-wife team that manned the Fort Liard Community Aerodrome Radio Station. They had an interesting story of getting on during a hirinjg blitz for the 2010 Olympics and after it was over, their pick of a few interesting spots in the North. ( My suspicion is that if you are the type of person who finds places like these in the north interesting, you probably get your pick of the litter. I tend to agree, but I'm sure the vast majority most likely feels otherwise...

It was a nice little airport setup, with all the basic airport-things you need. A little building, a parking lot, some radio gear, maybe a nav-aid and some runway lighting. A bathroom, a few chairs and magazines in a waiting room, a run-up pad and a hangar. 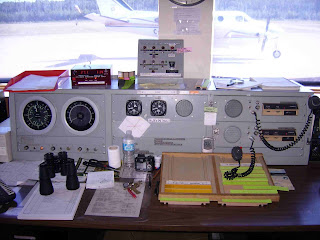 From left to right, the instruments and radio gear are;


The wind direction/intensity indocators are the two big black dials on the far left. I always thought that the wind information they gave you was averaged out, but apparently not in a place like this, as I asked him after watching him give out an advisory to a helicopter. Maybe thats an ATIS thing?

The CARs operators get a fair bit of downtime while on shift and manning their posts, so these places are usually pretty clean and this one was no exception. Its the unattended ones that tend to be a little on the grotty side...

I got the grand tour and was surprised to find this bad boy lurking in the closet. 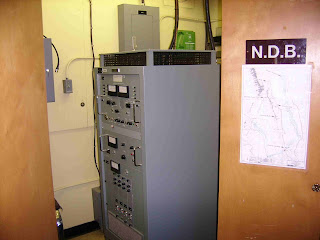 This is the NDB, the electronic guts of the airports only functioning nav-aid.

a Non-Directional Beacon is typically a fairly low-power AM transmitter, usually located at the airport or a short distance away and I've always been told is the most common up here, mostly due to the low-maintenance and low-cost to setup. Imagine my surprise when I found the W.O.P.R in the closet, pumping out random 1974 computer noises and a vicious amount of BTU's that their poor little window-mounted air conditioner couldn't even pretend to keep up with.

In my mind, I had always imagined a little box, about the size of a portable radio!

We live in interesting times in the field of Air Navigation. The use of GPS as a primary aid is quickly catching on. Costs for certified installations are dropping and the number of approaches available to those who choose to invest in the hardware and the training, get the comfort of an approach more accurate by a factor of ten than what you can do with this one.

In fact, I probably shouldn't say this out loud, but I'm pretty sure that the vast majority of aircraft and pilots, flying around with un-certified GPS setups in their aircraft, to an airport with an NDB, are using the GPS to tell them where the beacon is as opposed to the ADF ( radio reception gear for the NDB ) and maybe sparing a glance over at the poor little ADF needle bobbing and weaving around from time time as a back-up. 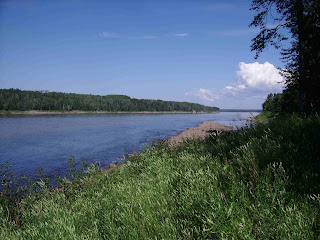 After hanging out at the airport for a few hours, I decided to brave the heat and go for a little stroll around the village. I managed to find a route that followed mostly the shady side of the street and made my way down to the river to have a peek. Its a nice little town, lots of old-school log cabin type structures, right in the middle of the village, and right alongside modern stucco-sided ranchers.

One woman had a food-stand type of mobile trailer set up on her front lawn. It wasn't open, but looked like the "mobile" part of the setup had long since stopped being an option and she had hunkered down to sell burgers and fries off her front lawn. Great idea, but good luck trying to float something like this with the zoning folks down south!

Thanks are due to my Mother, who gave me the tip of reducing file size to try and get photos posted on here. I went from an avewrage of a meg or two per picture and a good five or ten minute wait on the upload, to a couple hundred kilobytes and a 10 second upload time!

Its kind of too bad, I really looked forward to doing a bit more posting this summer, but a couple things have conspired against me.

One was the photo issue. I love posting pics, even just to look back at myself. The upload time made posting a bit of a drag and I stopped altogether for awhile.

The other issue is that now that I am flying passengers around, and living and working in such a small community, I'm a lot more aware of how posting details that could identify my customers or my employer, might not be such a good idea in the general business sense. Or not, I might just be a little paranoid or self conscious...

Anyhow, to try an catch up, here are a few pics and a few littler adventures of late;

Went fishing a few weeks ago. Had a weekend off and nothing to do, so I threw my fishing stuff in the car, packed a little cooler with lunch and drinks and hit the road. I'd seen a decent lake a couple hours drive away and a river that connected to it that was purported to have a set of waterfalls on it.

Fishing was pretty goo, a lot more fishing jumping then biting it seemed. The dragon-fly's were out in abundance and were doing their clumsy mating flying down close to the surface of the river and I suspect thats what the fish were feeding on. When they mate, they are joined together but still manage to fly around, just not with very much precision. I imagine from below the waters surface a pair of conjoined dragonflys buzzing the rivers surface and/or occasionally getting stuck in the water, is a decent target.

The little spot where I was fishing had one other fisherman when I got there. He told me he had seen a bear across the river an hour earlier. A half hour or so after I showed up, we could hear it walking/ crashing its way through the bush on the other side of the river. I eventually did see him a little later on, as he came free of the trees and found a spot in the tall grass along the river to lie down in. 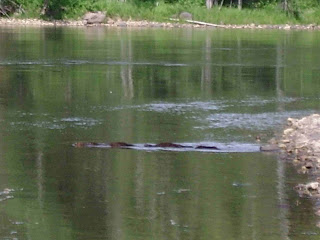 Also happened to turn my head and see a family of mink? weasels? crossing the river about forty feet behind me. They were pretty quiet, so I only noticed them by fluke. 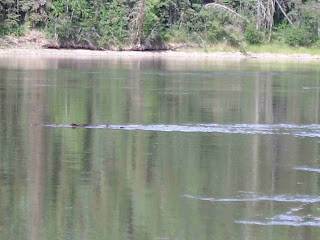 After fishing for a few hours with moderate success ( 4 little Northern Pike and 1 decent sized Walleye ), I popped in to see the falls on my way back to town.

The falls were pretty spectacular to see. I think there are three sets of falls on two seperate rivers all close by up here and all worth a look.

Was a little nervous about wandering around the footpaths, as there were bear warning signs up and no one around but me. In my fishing tackle box I have a little bell that you can clip to the tip of your rod in case you are throwing out a baited hook and then sitting back waiting for the fish to bite. It also doubles as a good little bear-bell, clipped to my pants pocket and ringing away with each stride. Grizzly bears in the area can be readily identified by the presence of such bells in their spoor.

If you look closely at the top of the falls on the right hand side of the picture, there is a little rock just before the falls themselves. 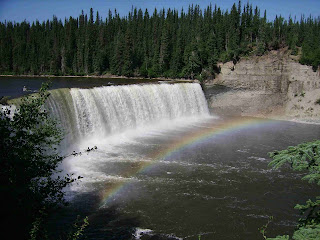 Closer inspection reveals that it is a little inukshuk-type structire built by some pretty brave/stupid people. 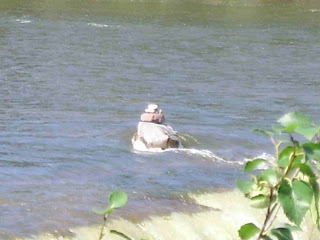 The countdown is officially on, as I will be leaving to go home to the West Coast for the winter in less than two weeks. I've got a good little stockpile of pictures, so perhaps I'll get the motivation to post some more on here once I'm back in the land of unlimited high-speed internet.