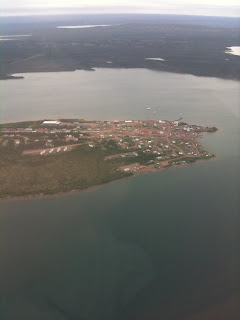 Got up for my first revenue flight with passengers today for my new employer. I took a fellow up to a little northern community called Lutsel k'e as the
regional Dene organization is having it's annual general meeting. It's
held in a different community in the region every year and this year
it was Lutsel k'e's turn. 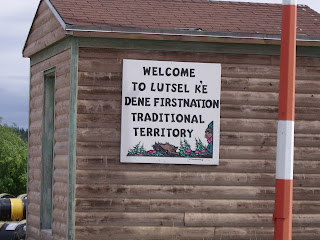 I am actually typing this on my Iphone sitting in the little terminal building as I am "holding" here for a couple hours while I await my passenger to finish up at the meeting and then bring him back to town. 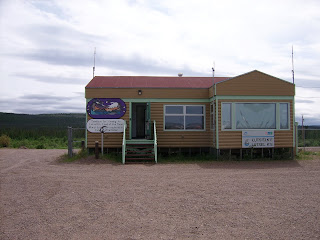 Flight up was good, exactly an hour and a half. There was a little
bit of low cloud and rain on my departure and it started to look iffy,
but quickly cleared up and it was high cloud for the rest of the trip.

The direct route would have taken me out over the lake, a good 20 or
30 miles from shore but given the limited visibility and low ceilings
in the rain, I opted to stick to the shoreline so I would have a good
visual reference to the ground as I ducked under the first little bit
of clag.

On arrival near CYLK, I heard a medevac call on the radio from an Air
Tindi plane as he tried to get ahold of the local Community Aerodrome
Radio Service (CARS station). I thought they'd be open based on the
airport entry in the CFS, but he got no answer that I could hear.

( The CFS is the Canada Flight Supplement, a small book about the size of a brick and approximately the same weight. The pages are the super-thin newsprint variety that you might find in say, a bible. Published anew every 56 days, it lists the details of every Aerodrome in Canada. I've always thought it to be more than a bit silly in this day and age to being wasting so much paper, but hey, two expired CFS's make a great set of chocks for your planes tires, so its not like they cant be recycled.... )


Sometimes while flying, you only get to hear one side of the
conversation as an airborne transmitting radio has much greater range
than a ground station, since our radios are VHF and limited to line of
sight.

I got within 20 miles and made my own call to the CARS station and got silence from them as well, guess no ones home...

The Tindi aircraft called me up directly and gave me their ETA as only a
minute or two before mine, so I let him know I'd wait for him to land
before I started into the airport zone. He was using a Medevac call sign,
so he had priority over me as far as I was concerned. He was doing a
straight-in approach to the runway I expected to be the active based
on the winds reported at the field before I left. I stayed about four
miles away from the airport on the "dead" side and waited till I saw
him on the runway before I turned in to start my own straight in
approach for runway 08.

For an airport with no ground station (since they were apparently
closed), an arriving aircraft will usually cross overhead the field to
have a look at the windsock and determine the runway is clear and
which runway is more into wind for the landing. Since the Tindi pilot
had established that for me, and given me a wind report once he
landed, I simply followed him in instead of crossing goer and circling
back around for the landing. Its always appreciated to pass it on to anyone else coming in as it saves a lot of unnecessary maneuvering at low altitude and airspeed.

Taxiied in and conveniently there was two sets of concrete pads. 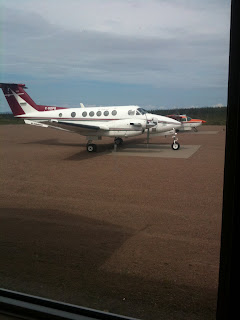 Most airports of this size that I have been to, only have one pad, so
that was a bonus. Since most of he airports up here are gravel runways
and taxiways, they usually have at least one concrete pad that we can
park with our props over top of so that on start up we don't pick up
little rocks and beat little dents into our props. You still have to
have a look at the pad before start up as you will often have to sweep
the area just under and ahead of your prop as there is usually a couple
little rocks hanging around.

Once we landed and my passenger went off to town I went into the
little terminal building, called back to head office to report my
arrival and had a little of my lunch I brought.

The Tindi medavacs patient showed up along with a nurse from the
health station. After she was done loading up she drove up to where I
was standing and let me know that if I was sentenced to hang out for
the whole day here, I was more than welcome to come down to the health
centre and watch TV.

Apparently, that's what all the pilots who hold
here do. Very nice of her to offer, but I brought my fishing rod and
was still thinking of walking down to the lake. After she left and I
started typing this out on my phone, I realized I had already killed
an hour and decided it might be better if I stuck around. My passenger
mentioned he would try and get done sooner rather than later and it
might even be less than a two hour hold. 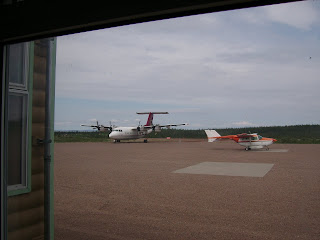 Another Tindi plane, this time a dash-7 came in and I briefly worried
that he wouldn't have room to get around me. Once the medevac plane had
left, I ended up being parked in the middle of the ramp. He had lots
of room though and only stopped long enough to shut down two engines
on one side and let two people off and then they blasted off.

The CARS guy had shown up just before the dash-7, which I imagine is
the "sched", and as soon as they taxied onto the runway and he had let
them know that there was "no reported traffic ", I heard the radio
click off and off he went, back to town till the next scheduled flight
I bet... Haha. Actually, he ended up coming back fifteen minutes after I typed that and was there for the rest of the time, including my departure.

My coworker pointed out as well that this airport is in the Northern Domestic Airspace, and as such, its runway designation is in degrees True, as opposed to Magnetic. 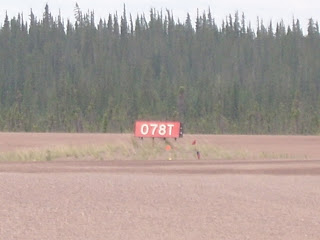 The runway sign indicated that this is Runway 078T instead of the traditional 08. I also just realized, usually these signs depict BOTH runways, as in a runway designated as 08 ( magnetic heading somewhere between 075 and 085, I can't remember how they round up or down, so forgive me if this is wrong. ) will also be runway 26, as the opposite end of the runway can be used as a "different" runway if departing the other way. So these signs, usually say " 08 - 26 " or " 07 - 25 ", but this ine only indicates ONE runway, even though I know for a fact the other end is a perfectly useable and legal runway. Odd.

Lining up to land here, your magnetic compass would indicate a direction of about 053 degrees.

Back at base I had another flight of similar length waiting for me, but it ended up getting pushed over to tomorrow morning as the winds at my destination were starting to get a little hectic and there was little real urgency for the flight to happen that day.

We had about a 15 knot headwind on the way up here, and going home I snuck up a little higher and ended up picking up 25 knots directly on the tail to get home a lot faster than the trip up.

In good form as well, I traded fuel for speed on the way up so that I wasn't lingering too long in the headwind scenario and on the way back I throttled it back a little to get back the fuel I burnt on the way up and let the wind do more of the work.

Air Tindi was pretty busy today too it seems. I heard two Tindi palnes talking on their way to a Lodge outside of yellowknife, before they took their conversation " company" ( over to a private company frequency ). Got back to base and looking at the news, it would appear one of those planes was most likely carrying the Royals...cool. 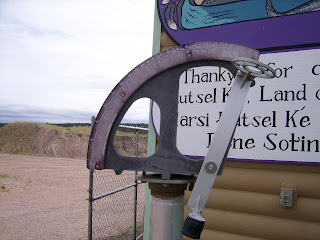 I noticed this instrument right outside the terminal building as well. I've seen them in other places, but never hada chance to take a picture. I THINK it's used for measung the height of a cloud layer for their weather reports, but I'm not 100% on that. It kind of looks like an old sextant. 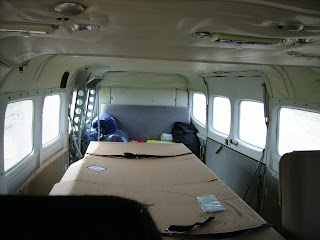 I got to fly this leg the other day, even though you might say we had a " passenger ". This fellow is known as a "hummer" as sometimes in commercial air cargo they will get a little sticker that says " HUMR "....that stands for Human Remains.

They always indicate somewhere on the box which side is the Head, as it is fairly important that it always be kept "head-up if there is any incline in loading / unloading or transport. I am told this is to keep the embalming fluids from pooling in the head.... In this case, we received the box with only two notations on it, one on each end and they both said " legs "...sigh..... We opened up a corner to see if there was any other way to tell, but everything is well wrapped up, and I was NOT opening things any further.

I took a few photos with my phone today, hoping the lower resolution pics would translate to faster upload times, but no dice. Its still pretty darn slow....
Posted by 5400AirportRdSouth at 7:15 PM