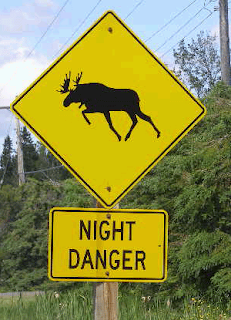 I always found the wording on these signs just a little off. I guess it gets the point across in the least possible amount of words, but I have to admit, it makes it sound like the night is more the problem, not the moose. 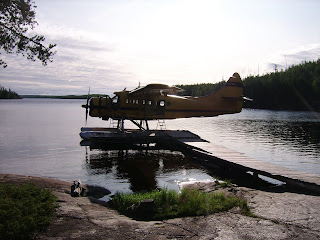 Sun finally decided to show up around here. Got all the way up to the mid twenties yesterday, that was a nice treat. The lake has really warmed up too, so it was nice to spend some time swimming yesterday in the nice cool water. Usually I'm running up to the shower, just to warm up.

Myself and the other dockhand are alternating some time off right now. He left this morning to go off to the nearest big city and visit with his folks for a couple days. Once he gets back, I'm off to Vancouver to see The Lovely Wife for a whole week! 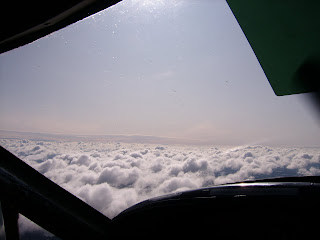 We're also having a little get together on my side of the family to have a little memorial service for my father, who passed away last year. We had the official memorial last summer, but this is more of a private ceremony and we're planning to spread his ashes at sea.

One thing I always remember growing up was his insistence that whatever I do, I be happy doing it. I suppose the flying is me finally taking his advice and doing something I love, even if it makes absolutely no sense on so many other levels..haha.

Had another pilot party this a week. After going to three or four of these now, I can really tell that how small the local scene is. Before I came out here, I thought there were a couple hundred pilots in town, not a chance, more like thirty or forty, tops.

We took the boat, normally verboten, but the boss-man was driving. No flying was planned for the next AM, so we knew in advance we were going to get our drink on. 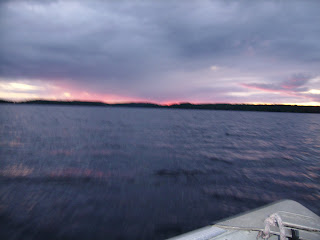 We did however, have a full day of flights and camp checks prior to going out there, so we didn't actually get back to base till almost 7PM, when we had started at 0400.

The day seemed like it just kept going and going and going. We went to eight camps in total I think. Dropping guests, picking up guests, weed whacking, fixing docks, loading fuel drums, unloading fuel drums, pumping gas, checking propane supplies, dropping off full tanks, picking up empties and cutting firewood. The last three camps or so was just a death march. We were all dog tired and just slogging through. You get to that point where you have no more hustle, but you have lots of work to do, all you can do is put your head down and put one foot in front of the other.

Surprisingly enough, we get back, changed, cold beer in hand and we were ready to go.

The trip out by boat to the party was slooow. We had put the wrong prop on the engine and it didn't make for very good speed. We had a choice of two props, one big, one small. Bigger is better right?

Not. Not if the engine doesn't have enough power to turn it fast enough. We would have been better off with the smaller prop, developing higher RPM, and more speed. Oh well. Sun was setting as we went out there and was almost down by the time we got in. We were almost the last to show and it was already in full swing. Some people more fully swung then others.

Once it got dark, a fire was started. Someone thought it would be a good idea to throw a tirew on the fire to really get things going. Luckily, someone else kicked it off the fire before it got going. We joked about the camp fire lacking the true ambiance of a good tire fire.

I was drinking beer most of the evening, but later on, as a few people started to leave, out came the Jager. A round of Jager-bombs for the surviving partiers ( Red Bull and a shot of Jagermeister ). That convinced most of the saner folk that it was definitely time to split. Those of us that remained starting passing around bottles of booze...not good. 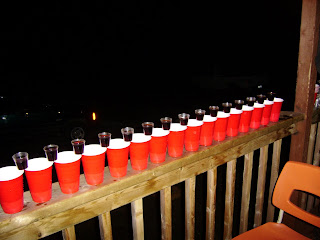 Eventually, we made our way home by moonlight in the boat.

The ride home was fun, there was a few of us going out at the same time, so a little bumping and racing was in order. A 9-Horse outboard motor can only go so fast, not to worry.

Felt pretty good the next day. I think drinking straight spirits really helped avoid a bad hangover, less sugar to deal with along with the usual dehydration.

Cant believe this summer is starting to wind up already. It looks like I will be cut loose from here right around the middle of September, still waiting on an exact date. The other fellow working here with me is probably going to hang around till mid October to help out with moose hunting season, but there isn't really a need for both of us. I'll be glad to get home as well. Really looking forward to being able to spend time with the wife, even just watching TV or walking the dog. 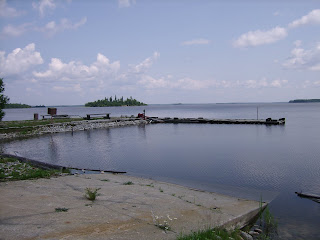 It'll be nice to get back to my old job as well. Radial engines and props are great, but I'm overdo for a little dose of jet-A. 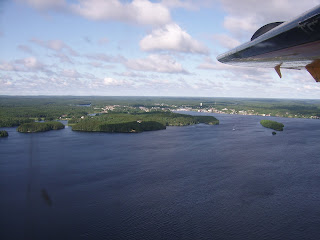 Once I'm back from my little holiday here next week, I'll do one more round of resumes before I leave the area. I'd still like to make a little road trip out of the last couple days here and visit all the locals and semi-local operators to put my face out there for next year. It'd sure be nice to find something in Vancouver, or anywhere in BC for that matter, but being out here and able to pop in and see the operators here is a big advantage to just firing out resumes by email. 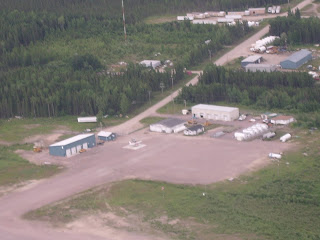 I've been thinking of maybe doing my multi-engine rating this winter if finances allow. I know my finances wont allow me to do my IFR, which I'm looking forward to doing eventually, but the multi might help a little bit.

Someone was telling me the other day, that it was rumored that EI was coming around to the idea of funding people to get their instructors rating. Makes sense, its a job skill and might be able to land someone employment in the end. Thats the point of EI, skills upgrading to help those with unemployment issues. Seasonal workers or workers in struggling industries.

From my understanding though, in order to qualify for any type of EI skill upgrade monies, you have to be unemployed. Seeing as I am going back to my old job, I don't really qualify.

Its funny, back when I was doing my flight training, I read so many times and heard from so many people; " enjoy your time during training, make it fun ". I always did to some degree or other, but I guess I never realized till now why its such good advice. I remember going up on flights to the local training area and slogging out a dozen steep turns, or practice forced approaches. I would get so intent on " nailing it " that I forgot sometimes where I was. I was in an airplane, on a sunny day, calling the shots and free to do whatever I wanted..kind of.

Oh, a while back I wrote about my search for a new beer for the summer... since the beer I previously enjoyed at home ( Sleemans Honey-Brown ) was waaay too expensive out here.

For awhile, I was drinking Labatts Blue. Very popular in these parts, very available.

However, that only lasted for about a month. I was turned onto a smaller label, available at the beer store in town, called James Ready, or JR.

They're a fairly new, smaller brewery and the beer is quite good. They've got a couple little marketing gimmicks that are fun as well. For instance, underneath all the caps is printed a little saying. Some of them made by the folks at JR and some of them were sent into their website by drinkers of the beer, and posted under the caps. Some of them are really funny, others just a little...weird. The theme of the website, where you submit the suggestions, was " How Can JR Help You? ", so you would send in your plea for money for some cause or other, or a little tip to put under the cap on how JR could help the world in general.

Reading through the website and peoples submissions was actually a little depressing. I lost my job, JR please buy me groceries. JR, please help me pay for my kids kidney surgery. JR, please poison my exhusband who ran off on our family.

The caps are a little funnier though. We've been collecting them. Heres a little sample of what you can find;

If you get this cap, buy another case, its the rules, man.

If you run out of fresh water, drink JR.

We dont drink Cranberry Juice, but we understand if you do.

The next bottle contains the antidote.

Do not drink with bra.

Lobby Ottawa to create a James Ready day and make it a national Holiday?

Give you the answer to a skill-testing question?

Out here, the sale of alcohol is still heavily regulated by the government liquor control board. The good thing about that is that beer prices are pretty much standard across the province, you'll pay the same price next door to the brewery as you do 1000 miles away. A caswe / 24 of beer out here is 28 bucks. Back home, its closer to 42. argh.

Thats alright though ,all the weight I lost at the beginning of the season has come back now that I drink beer every day. If I'm going to cut out the heavy manual labour, I better cut out the beer to balance things out a little. 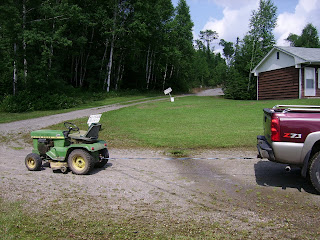