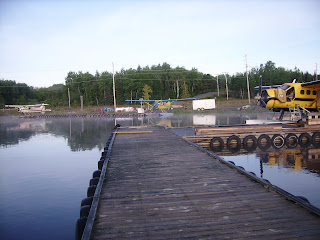 The next day we had a trip up north to drop off some guests and pick up a few more coming out. Everything started out nicely, but we didn't get much more than thirty or so miles from base when it became painfully obvious that the morning fog was not dissipating to the north and was actually pretty thick.

We put down on a lake and taxied through the fog over to another lodge outfit and tied up to their dock to wait it out. 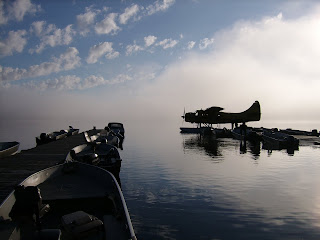 This happens a fair bit and no one seems to mind a competitors plane pulling up and disgorging its passengers onto their dock. The guests do get to talking and comparing notes though, especially when you end up sitting their for three or four hours, and that can be awkward. Particularly when our guests are bragging about how great the fishing is in the far northern lakes to the guests of the lodge who is accommodating us.

Sometimes you don't get a lodge, sometimes its an outpost cabin, like one of ours. Other times its an Indian camp where things can be a little....rustic. Still other times, you don't get to pick a nice lake you know has a cabin on it and you just end up floating back and forth on some unknown lake. This sucks, as everyone is piled into the plane and there isn't much to do except stare at each other in the dead quiet.

Its nicer when the weather is obviously crap and we get delayed at base with all the comforts of home.

Once the fog lifted a little, we set out again to make another go of it, now that the sun was poking through and starting to lift all the fog up from the lake. We didn't get far though on our trip northward before we had to land again and wait some more. This time it was just some lake and we floated for another hour before we finally got off again.

Made it through this time, but by the time we got back to base a three-hour round trip had turned into an seven hour escapade.

Lots more project trips in store over the next two weeks. We've got a few more docks to rebuild, boat ramps to repair and we've started the process of shutting down and winterizing the cabins as well. I think next week we're going north for five days or so to base out of one of the northern camps and close down a half dozen or so by doing day trips instead of flying all the way up each time from our base in the south.

I've got a little over two more weeks to go and then its back home!! I'm really looking forward to seeing the wife every night and being able to have some semblance of a normal life again. 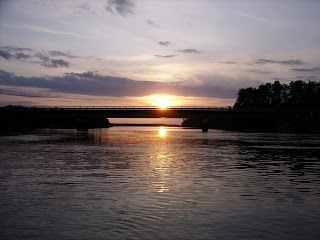 Oh, I had to share this as well. Compared to the weather we've been having this summer, and I use the term "summer" loosely, this was a welcome sight this morning. 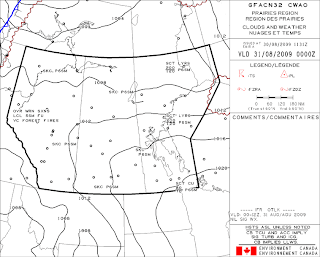 Usually, there is at least one weather system on the move, looming towards us. We've had a day or two of a nice quasi-stationary high pressure system. Gives us a bit of fog in the morning ( that and the cold night air over the relatively warm lake water ), but very pleasant afternoons.


That night we decided to try and deep fry something other than fish. Love the fish, but we had some chicken in the freezer and decided it coudlnt really be all that hard to make fried chicken could it?? 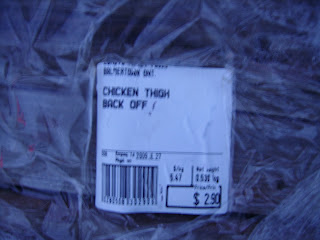 Unfortunately, the chicken takes a lot longer to cook on the inside than does the fish. The outside however seems to cook very quickly.

We ended up with deep fried chicken pucks. 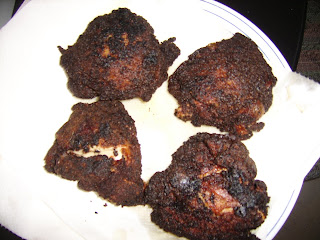 Found this guy lurking in a nearby campground. I swear those are inflatable air mattresses strapped to the float struts. The fact that this thing is missing wings make me fell just a little bit safer. 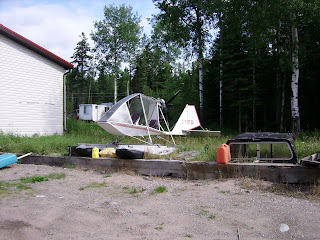 I'm also hard on the trail for my next job as well. I've revamped my resume into a new and improved aviation-single-page style and am making the rounds of companies I've been pestering to hire me.

My odds of landing a flying job in the off-season are markedly lower, even lower still are my odds of picking anything up on the west coast. I'm ok with working on the ground for the winter, I've waited thirty some odd years to realize this dream, another year or two wont kill me, if thats what it takes. 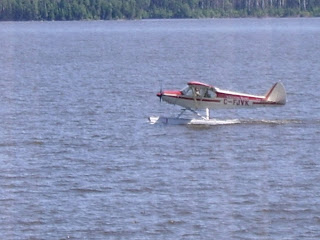