Flying in the North 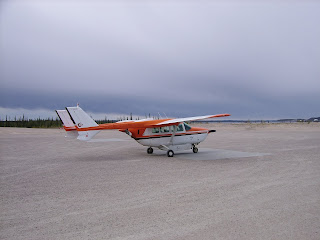 I wanted to call this, "flying in the arctic ", but then I started thinking it might be a bit pretentious. We didn't really go all THAT far north and frankly, there were still trees around, so I'm not sure it really counts as The Arctic.

It was however, my first time flying into the Northern Domestic Airspace.

The Airspace delineations are primarily due to the different type of navigation required in each. In the Southern, you use Magnetic Tracks and in the North, due to the proximity to the Magnetic north Pole, you use only True Tracks. The Control Area delineations are a little different, but have more to do with how IFR traffic is handled and who handles it. Arctic and Northern control areas see a lot of trans-polar long-haul flights that use our airspace due to great-circle routing between the USA and Europe/Asia.

In the picture above, the airplane is sitting on a small pad of concrete at an otherwise gravel/dirt runway and airport ramp. These are important, as it allows us to start up the engine and/or run it up, without sucking up rocks and beating our poor props to death. Once the aircraft is moving, most of the rocks that get sucked up, go back wards, but while stationary, they tend to take chunks out of the props. The pad should be swept off with a broom if there are rocks on it, but generally they are relatively clean.

In any case, our mission was to take a couple of Power Co. employees up to two different communities so they could do some testing of the local power distribution systems. Specifically, they had a special video camera that sensed heat and they had to take some film of every pole-mounted transformer in these communities. Apparently, when these things develop issues, they give off heat, so they can fix them before they pop. In the words of one of the technicians, " any electrical system having problems, will let you know by giving off heat. "

First leg was about 250 statute miles north and took us over/near the Yellowknife control zone. I talked to them on the radio and let them know we were there as a courtesy and was glad I did. There were several aircraft up in the area doing training flights and one of them was pretty close to us. I think it was a king-air and they were doing IFR training. Most likely, head-down and at high speed.

They weren't in the control zone, so had stopped talking to the tower and tower passed us their callsign and suggested we advise on 126.7 our position. We did, with no response, but stayed with Tower and they kept an eye on things and eventually let us know it looked like they were leaving the area and we could relax. Thats not really what he said, but thats what he meant.

Onto our first community and we held for about an hour and a half in the little airport building. Its actually pretty impressive, considering this town probably has a little over a hundred occupants. 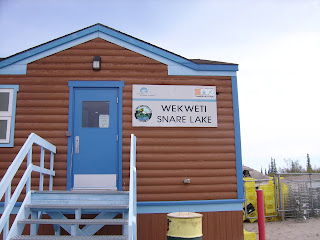 Not much to do here, other than chat, read old fashion magazines littered around the terminal and go poke around and look at an old airplane that was derelict out in the back patch. 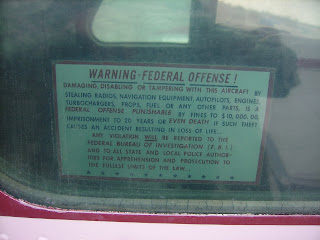 I thought it remarkable that this airplane was sitting there for so long and didn't look like it had been too badly vandalized or otherwise abused. I surmised it might have been because of this ancient sticker in the back window, threatening EVEN DEATH for such malfeasance.

Story was that the airplane had an accident here 12 or 15 years ago and had sat here ever since. Either the owner was offered an insurance pay-out to write it off and he accepted, or it had no insurance and the costs to fix it were not worth it.

If the insurance company did pay out on it, then they too decided it wasn't worth doing anything about either and there it sits. Considering what even small aircraft components are worth in their parts values, I'm surprised the insurance company didn't mount some kind of salvage operation. Even if it was to go in there and disassemble the thing, strip it for the most valuable parts and leave the rest.

The techs had a cab pre-arranged to take them into town, which was about three miles from the airport. We overheard the cab driver quoting them 50 bucks a head for the ride, so we decided it wasn't worth tagging along into town. 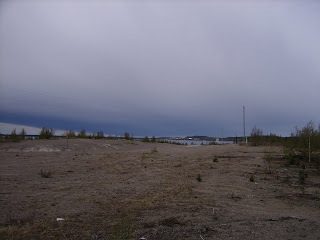 View from the airport, looking over the bay towards town.

They were only gone for about an hour and half and we loaded back up and blasted off for our next destination. This leg was a bit longer, at almost 350 statute miles. 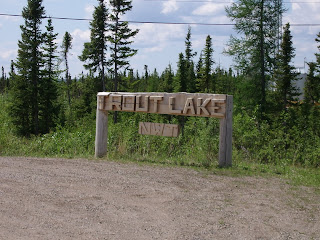 Had to go around once at the next one as the strip is a little on the short-ish side ( 2000 feet ) and the approach was fudged a little, with a missed touchdown mark and too much speed. Next one was better and we held there for a little over an hour and half as well as the techs did their thing in town. 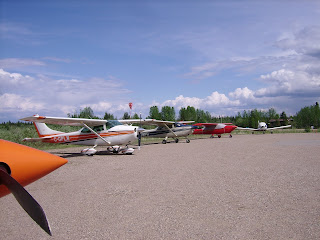 At the fuel stop, we fueled up quickly, with one eye kept on an approaching thunderstorm. Just after we finished, the Chief Pilot who was with me, got called into the terminal building and I let the guys know that if this delay was more than 5 minutes, that we would most likely be delayed, waiting for the storm to pass. He was out in less than a minute and we blasted off, leaving the approaching storm behind.

We actually were dodging thunderstorms for most of the second half of the trip, but they were easy to spot and we gave them a wide berth.

Back at base and its put the airplane to bed and do the paperwork for the flight. Almost 6 hours of flying!
Posted by 5400AirportRdSouth at 9:20 PM