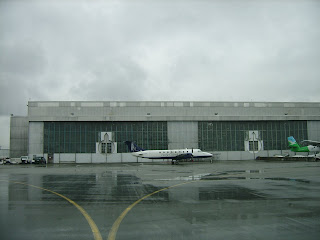 Wow, I certainly am feeling the hours and minutes as they pass between between my toes these days.

Two weeks now till I get in the car and point it North.

Yesterday morning was D-Day down at Transport Canada as I went in at 0900 and sat down to the first of two exams, back to back.

The first one I've been studying for over the last five months in between work, raising a newborn and surfing the internet, reading pilot-blogs. The second one, not quite as much. The first exam is for my Instrument Rating, the INRAT exam. I printed off a copy of the study and reference guide from Transports website and have worked my way down the list of recommended reading material and exam topics.

If TC wrote a written exam for driving a car, for example, the study guide might say something like " Steering Pinion Torque Sensing " and after dutifully studying steering design for thirty-some odd hours including the full engineering history, design and practical operation, you would get one of the two following questions:

If turning to the right, the control wheel should be rotated in which direction?

And you would sigh about all that brain space dedicated to the knowledge of the brothers Rack and their French competitors, the Pinion freres and their ground breaking work in the field of vehicle steering.

Or, you get one of these;

If the Over-Limit stops on the starboard side of the steering Rack are engaged, what is maximum pressure allowed in the hydraulic fluid bypass orifice before the hydraulic pump reverts to the standby mode?

And it all becomes worthwhile.... 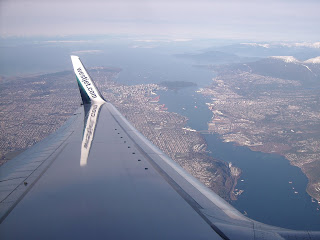 Anyhow, I passed the INRAT with a respectable score. I felt I got a fair mix of questions type one and two as above and my " knowing " of the answers before seeing the choices was pretty accurately matched by my final score. Sometimes with multiple choice exams, you know you were guessing on lets say, 25% of the questions, you had no real clue as the correct answer, yet you got an 85% mark.... I got 4 questions wrong in the end and two of them, I knew were wording issues that could have been interpreted two different ways ( and of course those answers were represented among the available choices.. ).

The other two, were part of a larger series of say a half dozen related questions, and I'm not sure which ones I got wrong. They don't tell you specific questions you got wrong, only give you a generic area of knowledge that you need to study on. Its so awesome when the back of the exam sheets says you need remedial study on " The Atmosphere. " or " Aerodynamics, Flight ".

Anyhow.... The other exam, was the IATRA. I think it used to stand for Intermediate aircraft Type Rating or something along those lines. Apparently it doesn't stand for anything anymore, but they kept the acronym as it was catchy. I concur.

I looked at the study guide for this one about the same time I started the course about five months ago and noted that it had a lot of similarities to the INRAT and those areas where it differed were actually very similar to the Flight Dispatcher exams I wrote a couple years ago. I planned on writing this one at some point, just not at the same time, or under the gun time-wise. I didn't look at the study guide again, to avoid getting distressed about being woefully unprepared, as I simply didn't have the time to study for it, so it was a moot point.

Even so, I scored fairly well on it at the end of the day. I did however notice a differential in the ratio of Questions-Known to Questions-Guessed and the multiple choice format gave me a few extra points for being able to successfully pick a letter out of four possible choices.

So, those hurdles are down, and they were weighing fairly heavily on me. Pooch either of those exams and I would be re-writing them on the day before I am scheduled to leave. Do the unthinkable and fail them a second time and I'd be kissing this job goodbye, as there would be a 30-day wait till a third try would be allowed.

Back in the Simulator today to brush up on a couple of things, the last sim session I will probably do. As my instructor pointed out to me, hopefully the last sim session that I have to pay for, hopefully, in my career. If there were any more for me in the future, they would/should be paid for by the employer.

I'm glad to be rid of that thing now too. In the beginning, I loved it for the savings versus trying to learn some of the IFR stuff in the aircraft with that insane meter spinning like crazy... But, I've had a hell of a time controlling the sim during the engine-failure-under-IFR portion. During these sessions, one of the simulated engines on the simulated multi-engine plane is failed during a flight where all reference is by instruments only ( ie in cloud ). In the real aircraft the nose yaws noticeably over to one side, but is controlled by the rudder and bank angle with pretty authoritative result. There is also all kinds of feedback in the controls and the aircraft itself to guide you through it as well.

In the sim, she simply pulls hard over and tries to roll over on her back. I get stuck trying to wrestle it back under some semblance of control and usually end up doing a poor job of the engine feather part because I know that feathering the prop probably wont change the outcome of the flight if its done while inverted. 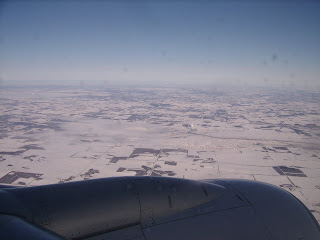 This is a picture of a coal-fired power plant out in the prairies. I found it neat that it created its own little fog/cloud bank over the discharge pond/slough where the hot water is ejected after the steam turns the power turbine. If you look closely too, you can clearly see the the piles of coal where they get stockpiled and then hauled to the plant by truck. 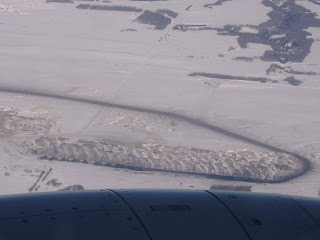 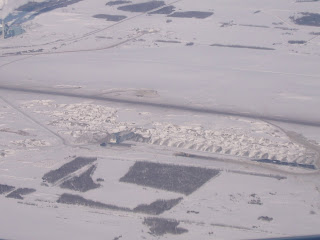 More drama with the last push to get things wrapped up before the end of the month, but the list of Must-Have-Done things is shrinking quickly, while the list of hmm-that-might-be-a-good-idea continues to grow.

I have two more IFR Cross-country flights to do, booked in for next weekend. One of them has to be 100nm in length and the other is just a training flight to a couple local airports to do a few different types of approaches and sample some of the airspace around here.

One big shopping day has to get done at some point. I've been growing a list of stuff I need for the new neighbourhood, mostly decent outdoor clothing and a few household items for the summer abode.

I need to cancel my car insurance once i arrive up North, as my employer is giving me the use of a small truck for the summer.

I need to pack up my computer and make sure I have a wireless receiver installed so I have internet access while up there. The XBox will probably stay home for this trip as I don't have a decent enough TV to play it on anyways and there is no way I'm showing up at my new job with a TV in the back seat of my car.

I need to get our good car tuned-up, cleaned up and oil-changed before the end of the month so it can be passed over to TLW. It is overdue for both the tune-up and the oil change, hasn't been vacuumed in a shameful amount of time and has recently developed a little rattle in the exhaust system at certain RPM's. I suspect a hangar is busted and needs a little work before it develops into something worse.

I need to get all my tax paperwork in order and either take it with me to finish electronically up there, or find time to do it here. I have a small amount of self-employment income, expenses and training expenses for my foray into freelance ultralight-instructing last summer and now we have a Dependant to add into the mix of income tax excitement.

There's lots more stuff to get done, and more seems to get added to the list everyday...strangely though, the amount of time I have left to get it accomplished seems to keep shrinking...almost daily it seems!

I'm throwing in some pictures I took during my trip up North-ish back in February to my self-invited interview for the other job. Mostly because I have no relevant pictures to add and I feel bad about that. 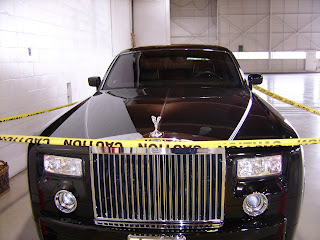 This was kind of funny. We had a fairly high-end car parked in one of our hangars while it awaited sale at an auction. This is pretty common, only the proletariat park their cars in "garages", the true elite hangar their rides.

Anyhow, I was assisting a flight crew off their aircraft and over to their hotel with one of our vans and while we waited for the last crew member to finish up on the plane, some of the others expressed an interest in the car they could see through the widow, so I gave them the 50-cent tour. One of them actually showed me a neat feature of this Rolls-Royce SomeThingOrOther. When the driver opens one of the rear doors for his or her passenger, their is a little button on the inside of the door-jamb that you press. Presto! out pops an umbrella, stored neatly in the doorframe. Sweet.

They asked whose it was and I replied jokingly that it probably belonged to a (ex) drug dealer as it was currently up for auction sale. We then peeked in the trunk and it was completely empty, except for a small brick-sized packed wrapped up in duct-tape and bubble-wrap in the middle of the trunk floor. Looking like a brick of contraband like you might have seen on Miami Vice... If you are that old that you know what Miami Vice is. Or that young that you know what gets wrapped in duct tape and bubble wrap in the truck of a (ex)drug dealers Rolls.
Posted by 5400AirportRdSouth at 7:22 PM