H is for Heavy Pad

At our FBO we have two parking areas for large aircraft. These are areas of the ramp where the surface is made of reinforced Concrete instead of asphalt. The concrete can support much heavier loads than the asphalt and is thus the place where we park the big jets.

We have a little procedure we use for parking them that we like to call " spinning " them. 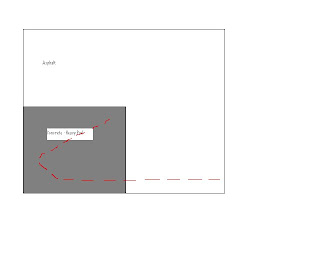 I tried to type up a description, but failed. Instead, behold my outside limits of my artistic abilities.

The red line represents the path you want the aircraft to take as you marshal it into position.

So, first off, the aircaft has to be kept close to the side of the ramp as they taxi in. as most of our larger aircraft arrive at night, some crews will be a little nervous about taxiing this close to the edge of the pavement. Crews that have been here before recognize the awesomeness that is our marshalling crew and will usually take direction well. Others, just don't.

Secondly, the path once the aircraft is on the pad and you are getting ready to " spin " them, needs to take a small 45 degree turn to it's right. This can be difficult to convey with marshalling wands. Technically, there is marshalling-ology for this and the degree of turn is sometimes indicated by the arm you are using to show the direction of turn being at a 90 degree angle to your body ( normal turn ) a higher angle, towards the ground, of say 120 degrees ( sharper turn ) or pointing sharply downwards, say 160 degrees, representing a hard turn.

If you are facing the aircraft and want it to turn to it's right, you indicate the direction of turn with an outstretched Left arm and wave the Right arm from an outstretched position, towards your head.

I've also seen it where the speed of the moving arm represents the sharpness of the turn.

As both are kind of obscure and usually not in most of the " official " marshalling guides, the second method usually works best as an increase in the speed of your signal is a little more obvious in my opinion. 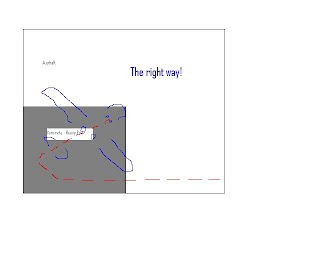 In any case, the little 45 degree turn allows the Main Landing Gear to move up the pad, so that when you finally make the larger turn, the wing will be centred over the pad, instead of hanging over the grass. This way, we can get ground vehicles past that side of the aircraft and we don't have under-wing slung engines running over grass and ingesting lawn clippings.

The problem is that most crews who are first-time to our ramp, once they realize we are taxiing them towards the edge of the ramp to facilitate turning them around 180 degrees or so, figure that once you start them turning, they should power up and crank it over, all the way over. 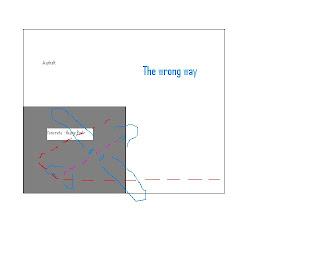 A large aircraft requires a good deal of momentum, power or sometimes both, to make a sharp turn like that. Considering they are coming in slowly ( scared of taxiing off the edge of the ramp, in the dark and uncertain of the marshallers ) once they realize our intent-to-spin, as soon as you indicate any turn, they will usually pour the coals to her and crank the nosewheel over.

It can be a challenge to get the gentle turn in first.

Technically the 45 degree turn is followed by another little straight-ahead segment as well. If they've already powered up and cranked it over, when you suddenly switch from a turning indication to a straight-ahead one, there can be some hesitation to comply. In probably 20% of the cases, they simply decide you are an idiot and continue the turn.

Thats on their first visit. We'll take the time to explain what we are doing and we usually get a little more trust the next visit.

It has to be hard for some of the flight crews though. I've seen some linecrew ( thankfully not at our FBO ) who I wouldn't trust to marshal a golf cart around a football field, let alone a 100 million dollar jet around a small ramp, in the dark, full of millionaire passengers.


H is also for Hold Entries

Not much in the way of hold entries on the ramp, but there sure are a lot in my simulator sessions at the flight school lately.

A hold is a way for Air Traffic Control ( ATC ) to park you in the sky. This might be for traffic spacing, a closed airport, runway or other problem. It can also be used by the pilot to park themself in the sky for a bit. Perhaps to change plans, figure out an aircraft issue or anything else where you'd rather stay in one place instead of blundering off in one direction and then have to turn around and come all way back depending on the new plan.

So, a hold is a maneuver that will ensure an aircraft will stay within a prescribed area assigned to it by ATC ( the Protected Airspace ). A hold is also defined by a navigation "fix". A fix being a spot that can be defined by the navigation instruments in the cockpit. Usually a radio-based navigation aid, but can also be a GPS coordinate.

Depending on the direction that you are approaching the fix, there are three different maneuvers that you are recommended to use when entering the hold.

For those people who know what a hold is, I won't make you scratch your eyes out listening to me explain hold entries.

For those that don't know what a hold is, I won't make you scratch your eyes out listening to me explain hold entries.

Suffice to say there is a little bit of mental math and a whole lot of visualization to do it properly.
Posted by 5400AirportRdSouth at 10:51 PM