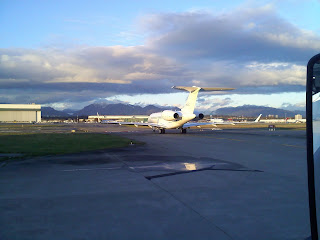 So, the Winter Olympics are coming to Vancouver. Less than 30 days to go till opening ceremonies and finally things are starting to happen.

I lamented a few weeks ago to someone that I found it strange that there seemed to be a complete lack of fanfare or boosterism going on, with the games rapidly approaching.

I read an article the other day that explains this is their plan. Apparently, they are saving all the PR work for the last couple of weeks before the opening ceremonies. Makes sense in a way, I guess. For the last two years all we have heard about was the negative aspects, the traffic, road closures, construction projects, security and all manner of doomsday scenario's on how we just aren't going to be able to handle it. So, save all the good news for the last couple of weeks and try to put a smile on every ones face when the world shows up.

Unfortunately, they either haven't applied the proper amount of sunshine, or they are directing it to the wrong anatomical area, but I am not really looking forward to the whole thing. I am in a way, I guess, but it's more morbid curiosity than anything else..

My own personal prediction ( you heard it here first folks ), is that these games are going to be a flop. In my view, the best we can hope for at this point is a fizzle. Unremarkable, would be best case in my opinion. My fear though, is that we are going to fail... There seems to be an all-pervading theme of " don't worry, its under control, you'll be told what you need to know when you need to know it. Stop asking questions. "

Which streets are closing? When and for how long? Which buses, skytrains are going to be cancelled / detoured / increased? Are roads to the airport being check-pointed with CATSA minions demanding that I put apple juice in a baggie before going to work? If I walk out of the " secure area " and go outside for a minute, will I be able to get back air-side without going through screening?

And now, how the heck are we going to have alpine events on the local mountains, when there is no snow? A week or so ago we had a " Pineapple Express ". A nice low pressure system that comes from the southwest ( Hawaii ) and brings lots of moisture and well-above freezing temperatures. Like double digits above zero. If its 12 on the ground, 3000 feet above on the local hills, its only around 6 degrees or so. And Raining. Really, Really, Raining.

They announced it on the news yesterday. Warmest January in recorded history.

I saw a picture of one of the local ski hills, the snow base is almost gone and big muddy, bare patches are showing.

We had a meeting the other day at work and went over our operations plans for the event. This is definitely going to be one to remember. So much of our operation has changed and we have less than 10 days to get used to it and smooth out the wrinkles before things start really happening.

We've also got sleeping quarters for the staff, both the local staff and the staff from other locations that are being called in to help out. The thinking is that on the peak days, at least, we will most likely be working 16+ hour shifts and going home to simply turn around and come back less than 8 hours later will not be very efficient.

The two peak periods we are expecting are the arrival and departure crushes. Prior to the official opening ceremonies on Feb 12, all manner of aircraft are scheduled to arrive. We've got everything from smaller business jets to full size airliners bringing in TV production crews, Military personnel, Athletes, foreign dignitaries and of course, the super-rich.

The arrival crush is the " easier " of the two, as most of the people will be arriving kind of staggered, over a three day period. The departure one will be the real deal. As soon as the Olympics are over, everyone wants out. Now.


But, we've got a good crew here. Lots of guys with 15+ years of experience. Even some who took part in the Calgary 1988 Winter Olympics.

Security is tight, to say the least. I can't really get into it on here ( or I'd have to kill you, and that would suck. ), but trust me, its tight.

Lots of debate about whether its necessary or not, economically feasible or not, etc.

One thing to keep in mind, in regards to the military participation, economically at least, its not very costly at all. Its a great training exercise, with all kinds of real-world problems and challenges that a training scenario simply couldn't come up with. If they weren't practicing and burning fuel here, they'd be doing it anyway in Cold Lake, in Borden, in Shearwater.

Theres a couple of cruise ships parked in the harbour, filled with cops and military personnel. Best of all, they are also filled with the cruise ships regular staff as well. That's right, 24/7 buffet, swimming pool, karaoke, shuffleboard. Tough bivouac!


I've been picking up a little bit of part-time work here and there helping out a local company detailing aircraft. I got an introduction to " Bright Work " the other day.

Any of the shiny bits on a jet, are actually polished aluminum in most cases. It is usually associated with a heated surface, it being where the anti-icing systems that use very hot air from the engines direct the heat to keep ice from forming. The heat is distributed through pipes which have holes in them, running inside the leading edges of the wings, stabilizers and engine inlets. The pipes vary in diameter to keep the pressure uniform throughout its length.

The polished aluminum bits are subject to a lot of stress, both heat, corrosion and friction. Engine inlets and the leading edges of wings and stabilizers are the ones most impacted by bugs, ice, hail, towing crews and errant baggage carts.

There is also the important aspect of keeping a smooth surface, as these areas are the ones most affected by the skin friction drag caused by the meeting of air and airplane. It has been proven that the smoother the surface, the greater its efficiency, through reduction of drag. Something as rough as your average sandpaper on the surface of the wing, for example, might reduce the lift production of the wing by as much as 40%. That's a lot.

So, the polished aluminum bits get polished a lot. You also don't want corrosion getting a foothold in the metal either, so the polishing actually takes off a little bit of the surface in order to remove any oxidation that has started.

We had a report the other day of someone " Twittering " aircraft arrival details on their twitter-page? ( I have no idea how twitter works, so play along.. ) and they caught the attention of the airport authority. Apparently they figure its an employee of one of the FBO's and they are trying to figure out who it is...

With that in light, and the fact that I am going to be pretty busy for the next few weeks, I doubt there will be many updates from me.

Pictures of visiting aircraft are verboten at any time, and there is no shortage of all kinds of security spooks looking to justify their cruise-ship per Diem that I can't really say or post much without risking a grey area....
Posted by 5400AirportRdSouth at 12:38 AM