The drippy end of the hose 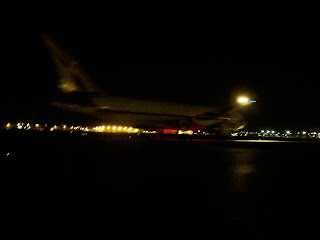 Back at the FBO, life is returning to normal. I don't have any real adventures to share like I did this summer, and I think thats probably the biggest thing that will drive me back there if I don't find something equally as challenging or interesting.

Part of that though, is familiarity, I think. The other part is the fact that its a relatively menial job. I say relatively as although the physical parts of what I do on a daily basis don't require a whole lot in the way of advanced intelligence or physical prowess. They do however, require a fair bit of safety-awareness and some technical knowledge.

Safety is the biggest one. One of my coworkers pointed out that in a lot of cases, when an aircraft is on the ground and awaiting fueling, theres a lot of action going on around the plane. Ramp guys are loading, grooming staff are buzzing around inside, catering trucks are hooked up to the plane and refilling its coffers. Mechanics are swearing at various bits and hoping that if they poke at it, it will stop doing whatever its doing, or start doing what its supposed to be doing. But, when I show up, the level of " danger " moves up a few factors.

A little dramatic, I think, but he has a point.

A lot of our job revolves around safety. If we were pumping water into the tanks, instead of jet fuel, I could do easily three times the amount of fuelings in a day that I do now.

I was thinking about the familiarity part of it the other day as well. A lot of what I found fascinating about the job has become a little routine to me, and not worthy of story-telling. On the other hand, I don't have much else to write about these days and I want to keep up the habit.

So, I thought I'd write a post about my job, my apologies if you feel the same sense of anti-climax that I do, after some of the escapades this summer.

Easily 50% of my job is fueling planes. Operating the truck and the fueling bits on different types of aircraft. I had a chance to get a couple pics of the truck parts, so I thought I'd start there.

Here is where it all begins, the Tank Farm. 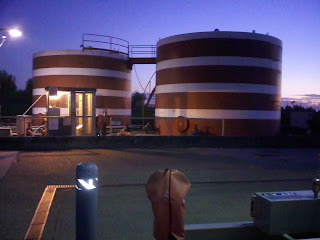 We usually just call it The Farm. Most major airports in Canada have at least two or three major fuel suppliers to General Aviation aircraft, and one or two more for the big scheduled airline types as well. Here, we pretty much have one supplier, contracted by the airport authority, to supply fuel to the big guys parked at the main terminal. Over on our side of the field, there are three major-brand suppliers and one independant local supplier.

The three major-brand guys have representation at every major airport in Canada, most likely worldwide as well. As all of the fuel must get stored somewhere in bulk form ( The Tank Farm ), this would mean at least three major fuel depots, just for our side of the field. The local municipality, and pretty much anyone who can see the inherent risk involved in large quantities of petroluem product storage, dont like tank farms.

Its also cheaper to build a soviet-style One-Big-Tank instead of four smaller ones.

So, in Canada anyway, the major-brand guys got together and agreed that they would split the responsibility and cost of running a single farm at each airport and having reciprocal agreements to use each others depots.

Here in my corner of the world, the Tank Farm belongs to us. We "sell" fuel to the other guys, and in other cities, we "buy" fuel from their farms and are relieved of having to build and operate one ourselves. Pretty good little arrangement.

The Tank Farm here has two loading bays and one unloading bay. 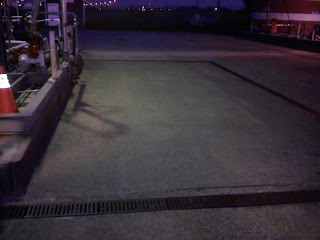 The Loading bays are where I park the truck and hook up to the pumps and have the fuel loaded into my truck. This is also called back-loading, or bulking. The bay itself is a concrete pad, that is drained off into a special underground tank with a fuel/water seperator so that any spills are contained. One of the things we have to watch for, is when parking the truck, to make sure that all the various draining points where over-flow fuel would come pouring out of, are parked over the pad. How embarassing if you overfilled our truck and the fuel all went running over the catchment basin and into the ditch.

Did I mention our airport is in a major bird migration area and sensitive river estuary?

The unloading bay is where we get all of our fuel delivered to. Great big tanker trucks come in, sometimes six or seven a day, to deliver the fuel into the tanks.

The tanks hold enough fuel that the new batch is allowed to settle for a period of time before we use it. When it is delivered, each batch also has to be quality control tested for a lot of different things and then filtered before being put into the tank. The mixed batch in the tank then has to be checked to make sure that the resulting fuel hasn't changed its properties significantly with the addition of new fuel. 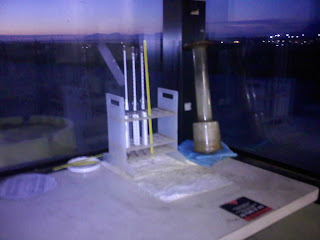 Whenever we hook up to the loading bay, we have to first "bond" the truck to the loading pump assembly. We do this when we hook up to an airplane to fuel it as well. The Bonding allows the electrical charge between the truck and the airplane/pump assembly to equalize and minimize the chance of any sparks caused by static. Trucks and airplanes move around on rubber tires and the electrical charge built up in them doesn't have many options to go to ground, so potential for static is very real. Helicopters are worse apparently. We bond the truck with a simple metal clamp onto an exposed metal part of our truck, the clamp has a wire that runs back to a metal bit on the pump. 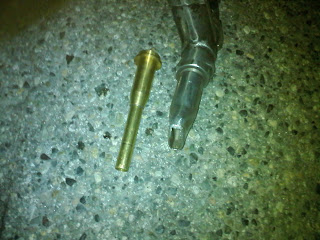 Once the truck is bonded, the nozzle can be hooked up. The nozzle is the same one we use for high-pressure fueling into planes. A " Single-Point " nozzle. Single point nozzles were developed to speed up fueling into large aircraft. Instead of fueling through a hose / free-stream nozzle like a gas station nozzle, spraying fuel directly into each tank individually from above, we plug into a fueling manifold in the plane and supply fuel at high pressure ( around 50PSI ) to a single point. The plane then directs the flow to each tank by computer-controlled valves, or in some cases, by valves on the fueling panel that we open or close manually.

The gas station ones are called " Over-Wing " nozzles. Overwing nozzles come in two different shapes. One is the J-Spout, designed to only fit into fueling openings on an aircradft that takes jet-fuel. The openings on a AvGas powered aircraft shouldnt accept this type of nozzle, as the nozzle is too big. The other type of nozzle is the AvGas nozzle, or as we call it, by its technical name, The Little Skinny Nozzle. In theory, you could fit a Skinny Nozzle into a jet fuel opening and load the incorrect fuel. But, you cant fit a Jet Fuel nozzle into an Avgas opening. This is important, as putting Avgas in a jet engine will cause engine damage over time, putting jet fuel in an AvGas engine, will kill it. Not only will it not run, the worst part is that with the residual fuel in the lines and carburettor on these types of engines, it will run just long enough to get you a couple hundred feet above ground, where the engine will stop and at pretty much the worst possible time, limited altitude, slow speed and limited options.

A lot of Jet Engines will actually be certified to run on AvGas in an emergency, but you usually get a time limit, like 30 hours or so, before you have to rebuild the engine. Considering a lot of jet engines are certified for thousands of hours of use before rebuild is required, and rebuilding costs are in the six figure range, even for smaller ones, this is definitely an emergency-only thing.

The only problem is that a lot of helicopters, which take jet fuel, also have small openings which will only accept a skinny nozzle. So misfueling is possible, AND, you have to manually change the nozzle on the truck, removing a layer of safety if someone were to forget to change it back afterwards. Not a big deal, not a complicated procedure, but its just one of those things that makes your spider sense tingle, like walking on a cliff-top... you know you're not going to fall, but one wrong step....

Once you're all hooked up to the pump, the flow of fuel is started by entering in a bunch of info on a bank-machine like kiosk. Driver number, truck number, password, fuel type, amount required, and start. The pump also has a dead-man control where you hold a switch in your hand to keep it running. If you were to fall asleep or put it down to go to the washroom, the flow of fuel would stop.

We manually calculate the amount of fuel we put into the truck based on a running tally on our little clipboards. Procedure dictates that we only fill the truck to 95% capacity, to allow for fuel expansion with heat. The fuel also expands inside and airplanes tanks as well. Something we have to keep in mind if someone asks for full tanks and we know the plane will be sitting on the ground long enough for the temperature to change. If we topped it up on arrival at night and then it sat there in the summer sun, there'd be quite a puddle underneath the fuel overflow vents.

The truck also has a high-level shutoff right around the 99% mark as well that is supposed to shut down the loading valve as well. As soon as we are hooked up and pumping, we test this shut-off. 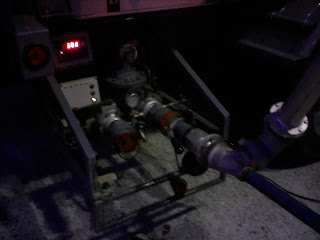 The pump generally does around 1000 Liters a minute. One of our bigger trucks hold upwards of 30,000 Liters. From dead empty, that can mean 30 minutes standing there and watching the numbers on the dial click over.

The tank farm has a nice view of the airfield though, so its not the worst place in the world to have to hang around for a half hour.

Once the truck is full, we do some more quality control testing on the fuel in various parts of the truck. We drain the sump, the lowest part of the tank, and make sure it is free of water and/or sediment. We also check the fuel in the pump/filter assembly as well, to make sure that the dregs of the last tank are still up to spec as well. If the truck was run close to dry, AND there was crap that had settled to the bottom, this might now be hiding in the pump or filter and not be detected when you check the newly filled tanks low point.

Back in the truck, call in to Base that we are clear the farm and on our way back and thats it, we're ready to go again. 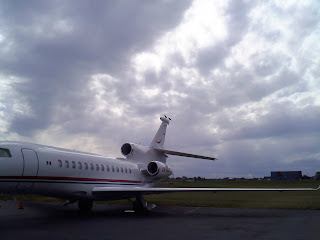 If you look closely, on the tail of this Falcon 7X, is a couple of falcons.
Posted by 5400AirportRdSouth at 9:32 AM