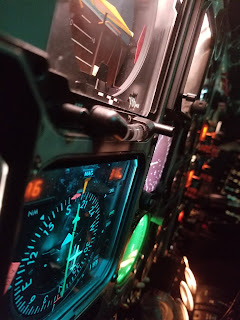 Alright, lets get you updated, to a degree.

I spent four years up North, flying seasonally, driving a truck in the off season.

We had always known that our time up north was limited. One of our primary concerns was that when my daughter was school age, we didn't want her to be in the public school system in our far flung part of the world. There's some real challenges in the school system in remoter areas of Canada, both in available resources and the ability to attract good educators. This is by no means a slight on the school teachers that work up there, but I think even they would tell you of the frustration in seeing fresh-out-of-uni teachers coming up to cut their teeth in remote areas that the more experienced educators typically don't want to go to.

So, there was that.  TWO was approaching the end of pre-school and getting ready to embark on her kindergarten career. We decided it was time to start the search for something that might take us somewhere else.

The other concern of course was that while I loved the flying up north, the economics of that type of operation didn't lend itself to paying me a whole ton of money. Neither did the seasonal aspect lend itself to getting the kind of hours in the logbook that would let me earn something decent.

Out went the resumes!

When I first started looking for flying jobs, I sent out 100 resumes and got three responses. They were thanks-but-no-thanks responses, but I was happy to see them. Now I had 1000 hours and sent out 20 resumes. I really wasn't wanting to take ANYTHING like I did when I went looking for my first job. I knew I wanted year round work, knew I wanted to be south of 60. The industry was still very tight, jobs were still scarce and 1000 hours didn't mean much.

Started to worry a bit and we girded ourselves for one more year up north. As is the way when you start to make other plans, the phone rang.

On my resume I had listed a reference whose name was known by someone doing hiring for a King Air 200 Medevac First Officer gig.

Funnily enough, after that resume blitz, my resume hasnt got me any of the other jobs I've held since. The industry is so small, as a commercial pilot, you're probably two degrees of separation at best from pretty much every chief pilot of every airline in Canada. If you're not an idiot, and you have a reasonably well-kept reputation, networking your friends and colleagues is going to be a whole lot more productive than the carpet bombing of resumes you have to do in the beginning! Even in this case, it had little to do with my resume, but more the fact that she knew someone that I knew and I put his name on my resume as reference.

They called, I got excited, we chatted a bit about that person, and I made a joke or two. They chuckled, relieved I was at least personable, and was told I could expect an offer email.

That was it.. A few days later I got the email, we talked about what it would mean in terms of moving, timelines, housing, school, pay and then we pulled the trigger.

Notified my current employer that this would be my last season, and got busy with the details.

Little details, like finding a place to live, finding work for my wife, finding a school for my daughter.

We made a reconnaissance trip down a few weeks later to scope out a few places and get  the lay of the land. We made it South of 60, but not by a ton, haha. Far enough south that we now had access to several fast food places, a walmart and a canadian tire. Downright metropolitan!

New Town had a lot going for it, including being a part of the tail end of a fairly significant oil-boom ( cue dramatic fore shadowing music ) that no one saw ending anytime soon. This is where Morgan Freeman's voice comes on in the background.... " It was going to end very soon. " he'd say, but we couldn't hear him.

New Job also had me flying a King Air 200 as a first officer, something I was very excited about. IFR, Two-Crew, Turbine, exciting stuff! It was a medevac gig too, something that also interested me. 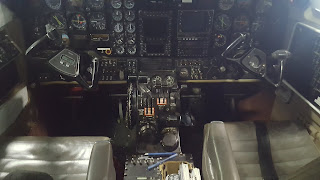 We ultimately came to the conclusion that it was going to be cheaper to buy a house in New Town rather than rent. Crazy, but true. All of the local rental properties were being snatched up by the local oilfield companies for crew housing, driving the vacancy rates down and rents up.  We had managed to save up some money as my winter work paid well and the wifes government job paid well too. Our expenses were very low, living in our little trailer, so we had just enough to plunk some money down on a nice older house with a big yard and a garage. 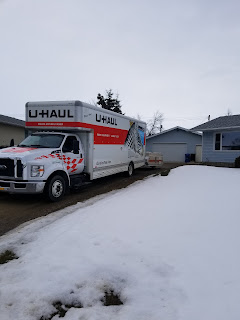 ( this picture is actually from when we moved out, we moved in with a much smaller moving truck, but like a goldfish, we expand our belongs to match the size of our tank..... )

A close friend of mine from back in the day actually lived in New Town and we had him drive up to Northern Town and help us pack the moving truck. He'd then make the odyssey back down to New Town with us, he'd drive my Truck, the wife would drive hers, with my daughter, dog and back seats piled high with crap. I'd drive the moving truck. Of course it snowed on the way down and we ended up in a slow moving convoy, peering through the blizzard trying to stay on the road the last few kilometres. Keep it between the Mayo and the Mustard! ( yellow lines and white lines, I thought that was funny when I heard it..and in typical dad-joke fashion, I've ruined it by explaining it.. )

One of my favourite parts of the new digs was that the backyard was big enough, and the weather cold enough, that I could put a homemade ice rink in the backyard. 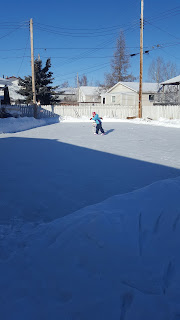 So, there we were. We made it "south" but still very much northern. We left a very small community, to a bit bigger, but still quite small community. Our winters were still cold, and relatively long, but a lot shorter than they used to be. Summers felt decadently long, at least for the first couple years, lasting from May though to October now, instead of June to September. If that doesn't seem long, well, like I said, its relative....

I had to do a pre-employment drug test at NewCo, which doesn't bother me, I'm far too old to bother with drugs. Besides, can't really afford drugs on an FO salary!

I dutifully showed up at the nurses "office", which was actually her home, along with another fellow who got hired at the same time as me. I have to pee in a cup twice a year as part of my medical exam to hold my license, so that's never bothered me or given me a second thought really. Until you move a thousand kilometres to a new city, with a wife who hasn't found work yet, and a young daughter, a fresh mortgage on a home you can barely afford, and EVERYTHING riding on your ability to pee in that cup. Guess who couldn't express a drop when it counted??  I had to eventually admit defeat, call the chief pilot and explain my technical difficulties.  Not my finest hour, but we laughed it off and I reported back the next morning with several litres of water sloshing around in my belly. Mission accomplished. Training started the next day, 5 hours of on-the-wing flight training on the King Air, taking turns with sitting up front for my training session and sitting in the back observing while the other guy did his. A training captain in the left seat up front.  I've done a few PPC's now, but I was still in single digit territory as to how many I'd done.

A PPC is a Pilot Proficiency Check, a series of exercises, maneuvers and instrument procedures that certify you to fly a specific airplane for a period of one year. Every different " type " of plane you fly requires a yearly PPC or you lose certification on it. Most commercial pilots will have many different " types " on their license, but only valid PPCs on a couple that they fly regularly. A Type Rating is your initial course on that plane, and you hold the Type Rating for life, but if you want to be employed to fly that plane, it still requires a yearly flight test.  I'm giving you the coles notes here, as there's lots of little wheretofores, howsoevers and Unless in Accordance with the Minister legalese details, but thats it in a nutshell.

Five hours of holding onto the mighty king air by my fingernails, followed by a hour and half  flight test with an examiner in the back. One false move and the house, the job, all on the line. Not stressful at all!

Flight test done, 20 odd company training modules and exams, and there I was, a newly minted Medevac FO in Northern ( but not as northern as before ) Canada.