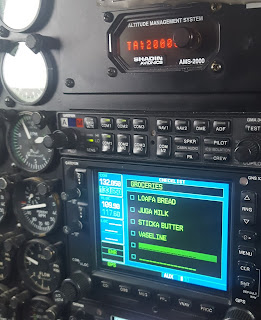 Out on a nice day Medevac trip to a small town one day, I came across something pretty cool at the airport we were sitting at awaiting our medics return with the patient, a PBY Catalina.

Originally designed and built during WWII, as a naval reconnaissance and anti-submarine warfare aircraft. The Catalina, also known as the Canso, was a flying boat, designed to land on water or on land. It had these cool "blister " windows that an observer could sit , searching the sea below for survivors of a downed ship, or an enemy submarine. I don't really know much for technical details, and frankly, you've got the google if you're interested in any case!

I think the blister windows have been removed from this one, as it spent the latter part of its life in fire-fighting work and they weren't needed. THey would normally be on both sides of the fuselage, just aft of the wing. I'm told that's also where they would haul in the floating survivors rescued at sea during WWII. 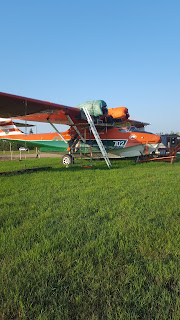 This particular Canso had been repurposed in its golden years as a fire fighting Scooper, or Skimmer. Refit with a water tank capable of refilling on lakes, it was employed in the service of Buffalo Airways in the NWT fighting forest fires, till it came to grief one day during a scooping operation on a remote lake in the Mackenzie Valley. My understanding is that its landing gear doors were somehow damaged during a scooping run and the aircraft began taking on uninvited water. The crew managed to abort the scoop and taxi the aircraft near shore, where it slowly sank in shallow water.

The crew made it out OK and the aircraft was abandoned for  period of time in the lake. Far too remote to mount a proper recovery, eventually it was decided by its owners that they should at least refloat it and strip it for what parts they could. A team of engineers was sent to the site and they did just that.  Engines, Avionics and anything else of value were removed and then flown back to Yellowknife to live on in the rest of the fleet, or as is the Buffalo way, secreted away in one of Joes many hidey-holes of parts and kept for posterity and future value, not unlike a hockey card collection. You laugh now, but as any hoarder will tell you, you cant just throw that away, one day it'll be worth a fortune!

The remains were left on the shore of the lake, inaccessible by road, for a period of time. Many moons, I'm told. How many? No idea, but the legends foretold that one day...never mind, you get it, I have no idea and am too lazy to look it up to make this a neatly foot-noted and hyper-linked historical record.

So, now here it was at this small prairie airport, looking in relatively decent shape. I actually had no idea on the back story, till I saw it printed on a large sign erected near a small shack beside the aircraft. In addition to the story of its origins, was the story of the ongoing restoration. A group of retired aircraft engineers, who were now farmers in the area, knew of this aircraft and schemed to acquire the salvage rights to it, rescue it from a very remote piece of wilderness, drag it back to a barn and make it fly again. Some real huckleberry finn type adventures ensued, and they did just that.  Out they went, some 80? 100? 50? miles off the winter road of the mackenzie valley, they hacked and slashed a bush road into the site, prepped it for transport by dismantling the major components, wing, tail, fuselage and got it back to the winter road. From there it was moved by transport truck to the nearest town, Norman Wells maybe?

There it sat till the summer barge season on the Mackenzie River, where it was moved down to Hay River, and then back onto trucks for the journey to the barn in Northern Alberta.

That was as far as the story on the sign went, but underneath that was a call for volunteers and/or donations or membership purchases to their historical aircraft restoration society they had formed to help fund the project.

As an FO, I had little in the way of funds to help, but they did specifically ask for volunteers, skilled or otherwise to help with the project.

I wrote the number down and called them up a few days later.

They let me know that they'd be happy for the help and that I should come out and attend their monthly meeting at one of the leaders farms a few weeks hence.

Driving out there in the northern prairie winter darkness was interesting. There is something very surreal about being in a warm, quiet vehicle, driving over desolate winter rural roads. Reminds me a little bit of flying, inches away through a glass and steel( or aluminum I suppose ) structure, is a violent and unforgiving environment. The truck suddenly breaks down or the airplane engine stops making noise, and things change from warm and comfortable, to considerably less so in fairly short order. 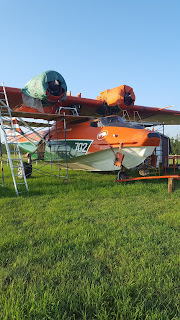 I had no idea what to expect of the "meeting",  but it turned out to be about six guys, sitting in upended milk crates and old office chairs in the shop of one of the farmers. Most brought thermos's of coffee and baked goods from home. The meeting was to plan for the next months projects, discuss parts acquisition plans and go over some of the tasks that needed doing. At this point in the restoration, most of the real grunt work had been done, the kind of stuff an unskilled person could help with. Tedious jobs of cleaning parts, tracing wiring, etc.  Although I didn't end up with any involvement in the project, it was cool to hear the story first hand. The baked goods were not bad either.

The aircraft had been plundered by Buffalo for a lot of major components, notably engines. Luckily, they had come across a museum in the maritimes that had an intact and running Canso donated to them for static display. They had no need of perfectly good running engines, so cut a deal with these guys. If they could come up with a couple of engine " cores", non-working, but intact engines, that they could hang on their display model, they'd trade straight across for the working ones they had.

Apparently, one of the bigger challenges they had was the wiring. As the engines are mounted up on the wing, all of the controls and wiring were routed up through a central pillar connecting the wing to the top of the fuselage. During the pillaging, this bundle was simply cut to disconnect the wiring. You can imagine too, that over the 50-60 year working life of the aircraft and its various modernization and upgrades/refurbishments, that the wiring had been changed so many times that it likely did not resemble the clean engineering drawings they had to go by. Each wire had to be traced, identified, replaced, a perfect job for the unskilled, but long since complete.

In fact, at the stage that I came along they were nearing the finish line. The aircraft was intact, engines running and most of its systems airworthy. Odds and ends and some obscure and difficult to find parts for a few items were that was left. They even had a couple pilots lined up to fly the thing and were aiming for a flight date only a few months away.

I asked how long the project had taken them to get to the current state.

This wasn't a side hustle or hobby project, this was a lifetime achievement!

I haven't personally seen it fly, but I know it has. As far as I know, the plan was to take it touring on the airshow circuit for a few years to try and recoup their sizeable expenses. These guys are nothing if not persistent, so I'm sure it did!