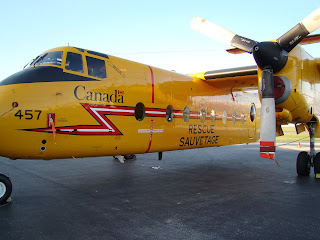 Had an interesting visitor the other day, a DHC5 - Buffalo. The Canadian Military uses these guys for Search and Rescue, and they are pretty impressive in their role. This thing has some very impressive Short-Take off and Landing capability for an aircraft of its size and payload. 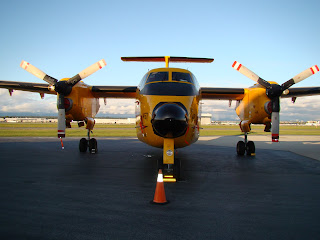 Its also got a ramp out the back end so they can drop guys and gear with ease as well. 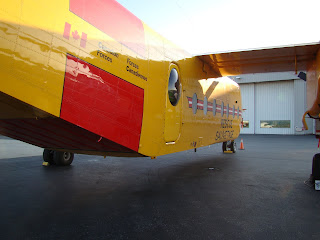 Its an old aircraft, and they are apparently getting a little cumbersome with all the maintenance, preventative and otherwise, required to keep them flying, physically and legally. 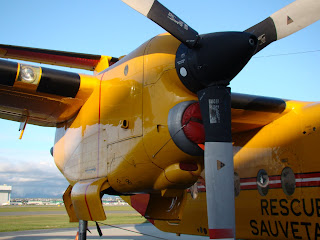 I had heard that they were looking for a replacement aircraft, but that the rumour was, since the aircraft has done such an outstanding job in this role, what they really want is the same aircraft, just fresh off the assembly line. Its pretty cool that some of these old designs not only stood the test of time in durability, but that we haven't really been able to improve on them since.

I'm sure part of that is the sheer scale and cost of designing and certifying a new aircraft. I think back to older cars and lament how, even with the improvements in automobiles these days, there is still that enduring quality that you can find in older cars that just isn't there these days. I'm sure they said that back in the 60's when the last model T went to the boneyard, but still.

An old Dehavilland aircraft's cockpit is all metal and glass. You cant wear it out over ten years by simply touching it, you have to really work at it to wear them out. How long will a glass screen last when it gets constantly covered in dust, mud, spilled drinks, and squashed bug guts?

If they remade a 1969 Oldsmobile with a fuel efficient V6, or even a hybrid, and the type of endurance of quality that they were designed with back then, I'd buy one.

Spotted in a hangar was this restored 1947 ( I think ) Lincoln 12. This was pretty cool. It had push-button door handles. There was no handle, simply a large recessed chrome button you pushed in and the door popped open. It also had power windows, which I am sure made some headlines in 1947. I took a few pictures, but unfortunately forgot to get one of the whole car. The whole thing is restored using original parts which is pretty impressive. Some of the parts obviously show their age in being faded, crystallized or otherwise aged, but its a classic example of engineering designed to last forever. 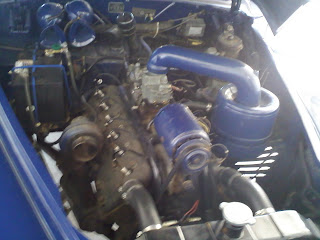 We opened up the hood, speculating as we did on what we'd find. Straight Six. Four Cylinder Inline. V6.

Along the lines of a big old radial engine, everything is nice and simple. Laid out in an orderly fashion and parts easily identified and accessible. I could point to every part under that hood and knew what they all did. I'm not entirely convinced yet that hiding under the big plastic cover under the hood of my newish car isn't a couple of Microchips and a Wizard. 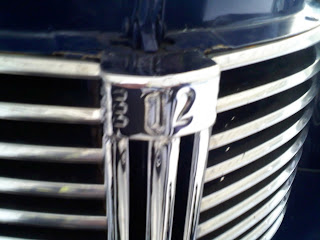 I guess the big chrome "12" on the hood might have been a clue. 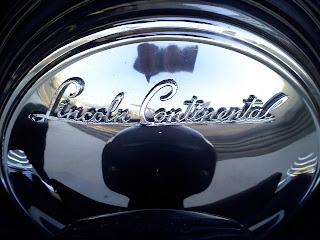 If you look at a Beaver or an Otter and then at its realistic lifespan, compared to its contemporaries ( of which there are few ), it is simply hard to believe that todays products have the type of engineering to go the distance. Like I said, they probably say that every generation as technology marches on...

Viking Aircraft in Victoria in now pumping out the new DHC6 Twin Otter 400 series, and I saw a good clip of a documentary that toured their plant. To avoid having to re-certify everything, they pretty much have to stick to the original plans, with very little deviation. The cockpits and engines ( I think ) have been modernized, but everything else is circa 1960's engineering. Back when planned obsolescence wasn't a very good marketing strategy.

Rumours abound that if the Canadian Forces had its way, someone would start retooling to build them some new Buffaloes as well.

I've also started studying towards taking my Instrument Rating written exam. I ordered a copy of the Instrument Flying Handbook off Amazon and am eagerly checking my mailbox every day. It might take a while, so I'm brushing up on my battered old copy of the AIM, the Aeronautical Information Manual. Its kind of dog eared and fuel-stained from being toted around in the fuel truck to read on breaks and when I'm loading the truck.

I've considered adding a placard on the front cover, changing its title to Flying For Dummies.

While I'm waiting for the manual to arrive and the studying to begin in some sort of organized fashion, I decided to take a swing at figuring out Holds on my own. I did a few during the instrument training portion of my Commercial License course, but as I wasn't doing an actual instrument rating at the time, it was more of an introduction than any type of proficiency training.

I've found a few good resources on the net, including a good little powerpoint presentation by an outfit in Washington State called Bruceair. You can download the PPS file if you're so inclined, here.

Its kind of a fun, as along with trying to wrap my head around the hold entry procedures, I can use my computer game, Microsoft Flight Simulator, as a fun tool to practice what I have learned ( or find out I didn't quite learn it and should maybe keep studying..haha ). I've often heard pilots lament about the difficulty of performing holds, or more accurately, hold entries, so I thought I might as well get started.

We had a mechanic come up and help us this summer when we had some mechanical issue and I remember we had a choice between starting on two different tasks one of them easy and one of them difficult. He said " If you have to eat two frogs, you might as well eat the big one first. ". I get the basic principle behind the expression, but it still kind of strikes me as an odd thing to say.

I did this with my time studying Meteorology as well Hearing that that subject was the one that most often gave people the biggest problems, I dove into that first and spent a lot of time making sure I understood what I was studying.

In any case, any studying I can do that involves computer games and aviation is A-ok by me...haha 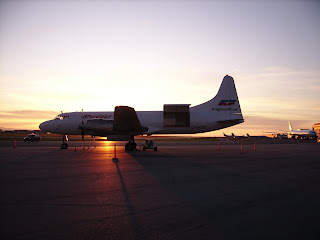 I noticed a Convair 5800 the other day out on the field as well, and it had its cargo door open. I didnt know that these things had been converted to carry containerized cargo. I had always seen the ramp guys up there with the belt loaders heaving the boxes out loose. Apparently though, they have put in roller floors and are using a non-standard(?) sized ULD to fit in the cargo hold. For the non-geeks, Containerized cargo makes loading and unloading planes quick and easy. The time-consuming part, stuffing the containers ( Cans ) with cargo can be done before arrival by the grunts in the warehouse. When the plane is on the ground ( stopped, not making money ) it can be quickly offloaded and reloaded and sent on its way ( moving = making money ). Frankly, it saves on a lot of wear and tear on the plane as well. Knowing what most large aircraft are worth, dollarwise, makes me very careful around them. The guys that they send in their to load and unload boxes in the middle of the night, generally speaking...not so much.

Oh, and the Convair 5800, 1940's Engineering. Albeit updated by the locals up at Kelowna Flightcraft to sport a couple of turbojet engines and an enlarged fuselage. An Oldsmobile with a Fuel Injected V6. 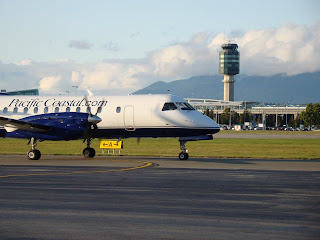 Days are getting shorter now and my afternoon shifts out on the airfield are giving me less and less opportunites every day for decent daylight pictures. My night picture attempts are a joke, but can make for some interesting effects. 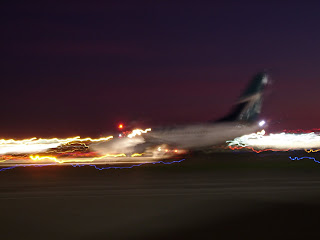