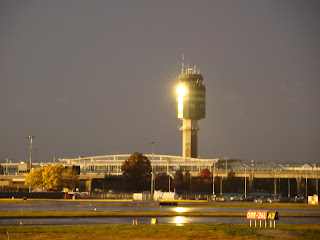 Had some interesting visitors over the last couple weeks so I wanted to post some pictures I took. 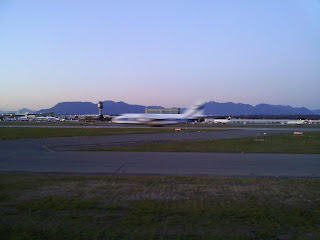 A couple saturdays ago, I spotted a strange flight number and aircraft type on the computer program we use to track aircraft in the air. Theres a couple free-ware programs out there like Flightaware , which are OK, but we use a commercial, pay-for-use one which lets us look at pretty much all of north america's flights, or filter them to see only ones arriving to or departing from our airport. We can also search by model of aircraft, for example, to see all Boeing 747's currently in flight. It also lets us search for an aircraft's tail numbner and even find the last known airport where that aircraft landed at. Helpfull if we are expecting an aircraft and its delayed, we can find out where it is and at least get a rough idea of how much lead time we have before it arrives.

In any case, the strange flight I spotted, turned out to be a huge Russian Cargo plane, an Antonov 124.

We went out and watched him land, of course thats when my batteries packed it in on my camera. Nice. 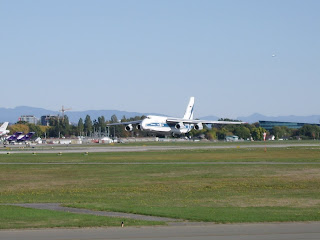 I have my cell-phone camera as backup, but its not the greatest... 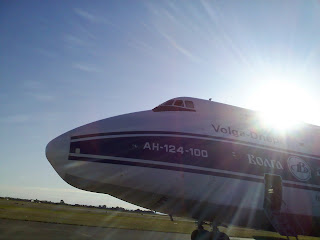 It being Saturday, and deathly quiet on our side of the field, I jumped in the truck and drove over to where they parked, to have a look. 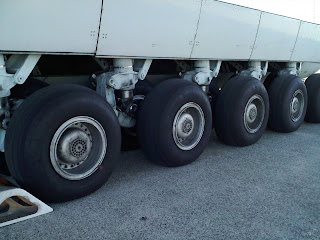 This thing is huge! 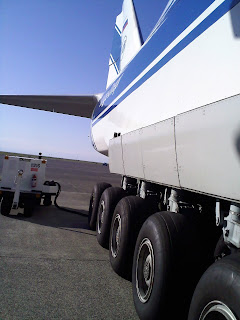 Check out the fuel panel on this bad boy, I count at least 7 Tanks, and it looks like three valves per tank? Not really sure, as everything is written in Cyrillic. 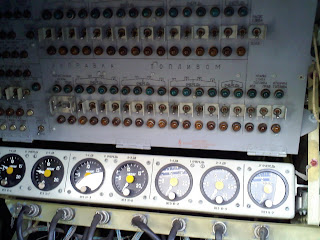 While I was walking around taking pictures, I noticed the crew hovering around inside near the door. They had the ladder down and the fueler was actually inside with them, but no truck nearby.

I figured it couldnt hurt to ask, so I asked the Russian looking guy if I could come on board.

He scowled at me a bit, and then said yes. Sweet!

He did tell me as I climbed the ladder, " No Picture. ". He wore his impressive looking scowl the entire time I was inside. 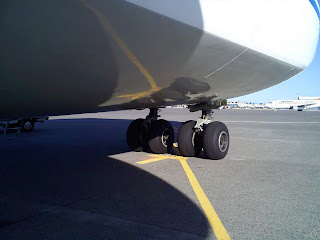 Check out the twin-dual nose gears!

There was a ladder at the front end of the cargo deck that gives access to the upper deck. I had to ask, but I already knew the answer, when I asked if I could go upstairs. " No, Nyet. "

I scooped a couple pictures off Airliners as I was curious as well, what the upstairs looked like. 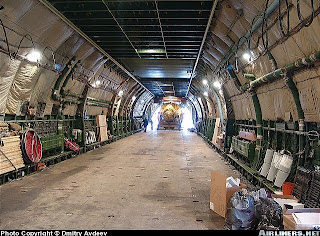 If you look along the walls of the cargo hold, there is a seriously impressive amount of spare parts and tooling for this thing as well. I imagine there is at least one and possibly even more, Mechanical Engineers that travel along with this thing as well to keep everything running smoothly. That would be quite the job flying one of these. I imagine they get to pretty much travel the entire world. I dont know if it was just the stereotypical Russian surly demeanor of the crew, or if this job might be a little more miserable than it would appear to an enthusiast...

The hold inside this thing is gigantic. There is the main deck cargo hold that holds oversize cargo, but there is also a passenger deck running along the topside of the hold as well. The Cockpit is at the forward end ( obviously ) of the upper deck. 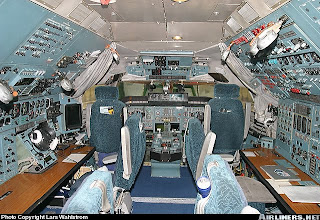 From the number of chairs in the cockpit, this beast takes a flight crew of at least six. Captain, First Officer and I would surmise, a Flight Engineer, Second Officer, Navigator, Radio Operator?

Behind the cockpit it opens up to the passenger seating area.

Behind the passenger seating area is also a small compartment that has a couple of crew bunks as well as a full galley!

Behind that even, running the rest of the length of the fuselage is a maintenance space. 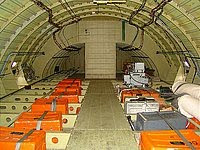 This particular plane had originated from Texas and was on its way to Alaska. The hold contained 5 Patriot Missile systems mounted on giant trucks. Apparently, some representatives from the manufacturer were upstairs as well, travelling along with the cargo.

I imagine that the charter itself must have been by the contractor who was selling this equipment to the US Military, as they have no shortage of heavy-lift aircraft of their own. While the Russian built AN-124 is the second largest civilian cargo aircraft, the US Military has at least one heavy lifter that I know of that rivals this one, in the C-5 Galaxy. The Russians also have the AN-225, which is even bigger than this one, but I think there is only one or two of them around.

The reason the fueler was inside and no truck in sight, was that there was some sort of problem with the payment arrangements. These things are usually planned pretty well in advance, with fuel contracts and fuel releases being sent to the fueling company days or weeks in advance of the aircraft arrival. I have heard however, of these guys carrying around large sums of US Dollars in cash, for those places where credit arrangements are harder to secure.... Good luck asking Sergei Scowlinski for a credit card imprint....

Eventually the fuel truck showed up and they took their fuel and left. 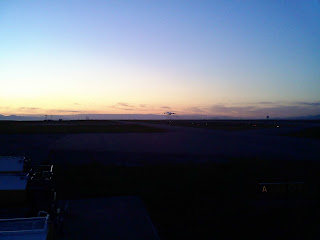 I was a little surprised that this aircraft didn't have the legs to go from Texas all the way to Alaska, without stopping for fuel. The cargo was bulky, but it didn't look overly heavy that they would have had to restrict how much fuel they took on at origin. Perhaps the trucks were heavier than they looked. I wondered if it was a cabotage issue, where a Russian registered aircraft couldn't fly from point-to-point within the USA, without stopping at an international point in between, but I don't know if that really applies to a private charter like this.

The job hunt continues, but I'm kind of holding off the I'll-Take-ANYTHING mode for the winter I think.

Finances dictate that I make some money and pay off some of the debt we've incurred both in my training and this summers little adventure, before we go gallavanting off anywhere.

I estimate we've spent about 35,000 on my flight training to date. Knowing that most of the jobs I am applying for pay in the neighborhood of...minimum wage.... the numbers are hard to stomach. I can see how so many people that start out down this road only to end up giving up and going back to their old careers or simply finding new ones. 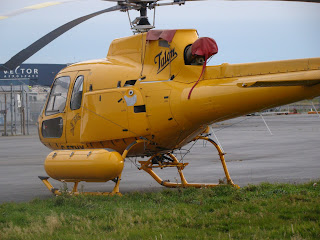 The company I work for now is also about the enter into contract negotiations with our union. More money might be in the future...or not. We're very much overdue for an adjustment in our pay scale, but the economy certainly doesn't help our bargaining position.

A certain high-profile international sporting event looming on the horizon doesn't hurt though. Most of the local public service unions and other large unions groups have pushed for and settled some decent contracts in the last year. Everyone wants everything settled and smooth before the world shows up here. No one wants any last-minute shenanigans to mar the event.

The hunt for some part-time work continues. I'm hoping to be able to make a few bucks and be able to get back up in the air at least once a month or so. I really do miss the flying.

I picked up a few hours here and there with a local outfit that details and grooms corporate aircraft. The pay is kind of crap, but its very near my regular job and I can usually put in a few hours and then punch in at work. Its pretty convenient and the thrill of poking around inside Challengers, Globals and other high-end business jets is still a novelty. Their work is kind of sporadic though, so its pocket money more than anything.

Big thanks to Chad and Ryan for giving me some leads on job opportunities, even if they're long shots. This is the biggest reason I'm hanging onto the FBO job is all the people I meet who are on similar paths as me, or even a few years ahead. You just never know when someone you know will have their boss ask them if they know any pilots looking for work... 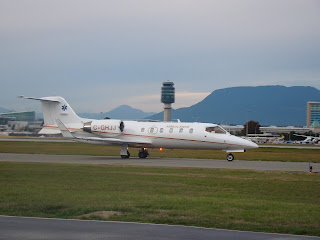 We had a pretty low-key Thanksgiving out here, or I did anyways. With my afternoon shift at the FBO, I tend not to be available for family events in the evenings and on the weekends. I'd like to change that a little if I can, but the afternoon shift is also the one with the most overtime, as the sports Charters usually arrive late at night. The evening guys are the ones who get asked to stay late and handle them. I'm, also still fairly low on the totem pole, so my shift-preference doesn't count for all that much. There is talk of going to a shift-bid system ion the new contract, which could bode well for me. There are a few guys with less seniority than me who hold shifts that I find a little more desirable in terms of time with my Lovely Wife and our respective families.
Posted by 5400AirportRdSouth at 12:22 PM