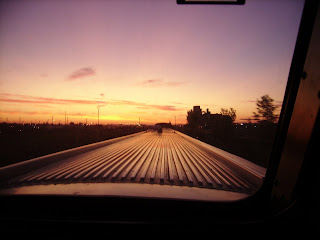 Spent most of last night sleeping on the doorstep of a CN Rail maintenance hack out in the middle of nowhere. My room mate from base was nice enough to drive me down to the siding where the train stopped in order for me catch the train, my first leg of the trip home. As he had to work early the next mornng and my train wasn't due in til 0315, he had to drop me off around 9pm in order to make the 2 hour drive back and still get a decent nights sleep.

I arrived just after 9pm and promptly discovered that I forgot my cellphone back at base. That sucks. I probably had service there and could have killed an hour or two talking to the wife and surfing the net. My room mate promised to mail it to me and I'm almost positive its on the kitchen table, so at least its not lost.

One other guy was sitting there waiting for the train as well. He was a little scruffy, but turned out to be a young fire fighter going home after a not-so-busy season out east, where we had very little dry weather all summer. We chatted for about a minute and then settled in for the wait, he was definitely not too talkative.

I tried reading for about an hour before the temperature started to drop and swatting the mosquitoes started to tire me out. My fellow traveler had already taken refuge in his sleeping bag so I decided to do the same.

First I put on a nice coating of Deet ( Off ), my repellant of choice, and then donned my head net. Into the sleeping bag on the open wooden porch of the shack and then my hood pulled over. I was warm, safe from bug bites but definitely not too comfortable on the hard wood floor... Better than the dirt I suppose, but a nice moss layer would have been an improvement. The whine of the mosquitoes has me trained to swat at them, even though I know I'm safe, so that was a distraction for awhile too, as they buzzed around my head net. Eventually, I managed to start nodding off.

One thing that kept me awake was the fact that my cell phone is my alarm clock and the only other device I had with an alarm was my MP3 player. Its batteries are horrific, and I was worried that it would run out of juice before being able to perform one last task for me. kind of important task too since if I missed the train my next transportation option was hitch hiking. I used to do a lot of hitch hiking in my younger days, but I wasn't really feeling up to it tonight. The alarm on the mp3 player was also just some stupid little tiny beeping. I presume because it had no real speaker, just some electronic component inside that made a little bit of noise on command.

It got pretty chilly and a pretty thick dew formed, but I actually managed a couple hours sleep. I was awake already around 0300 so I didn't need to depend on the alarm in any case. Gathered up most of my stuff, but left my sleeping bag out as it was doing a pretty good job of keeping me warm while I waited. I figured I would hear the train coming from fairly far out and that would give me enough time to roll it up and strap it to my pack before the train pulled in.

I didn't count however, on the train needing to slow down well before my little siding so it kind of snuck up on me, strange as that sounds. I kind of frantically packed it away and had to walk a little ways down to the train to where they had opened up the baggage car.

Their wasn't even a real siding per se, so the train just sort of stopped, straddling the road. My camera takes crappy night shots in any case, so I didnt bother trying to get a picture. I doint think even the best camera could have captured the sight of this giant train sitting their making so much noise in the middle of the night in the middle of nowhere. It actually stopped about 50 yards back from the little porch where I was holed up, so once I had my sleeping bag packed up, I felt a little self conscious stumbling through the dark towards the train, blinded by its headlights. The bag car door was open, so I heaved my gear on up to the guy inside. He suggested that I could take my huge pack and duffel inside with me if I wanted to. I imagined smashing my way through a train car full of people trying to sleep and then struggling to find a place to stow it, so said no thanks. I think he just didnt really feel like dealing with my stuff. Maybe I interrupted his sleep...

Two cars down I got to the open passenger car door, where the conductor fellow was waiting for me. I was the only one getting on the train at this stop, so he had my name. " Are you X? " he asked me. I told him I was and aksed if he needed to see any ID or my ticket. He told me not to worry about it and he would get everything from me on the train once we got going.

Once on the train, I was a little surprised to find it almost empty. The ticket guy said they were running around 30% capacity. I had my pick of seats and settled in to resume sleeping. Ticket guy came around and checked my papers and offered me a pillow and blanket. He went over the composition of the train, pointing me towards the dining and observation cars, letting me know when they opened and encouraging me to use them. Bathrooms and water fountain pointed out and a copy of the emergency procedures card in the seat back in front of me.

I hadn't been on a train in Canada since I was probably 12 or 13 years old, having taken it from Edmonton to Halifax. The cars and seats were exactly as I remembered them, with the exception of the removal of the ashtrays. I'm sure they have been overhauled and re-upholstered and whatnot more than once since the late 80's, but it was weird seeing it exactly as I remembered it.

I promptly went to sleep and slept for a good three hours, before the sun came up and we were getting close to the city. 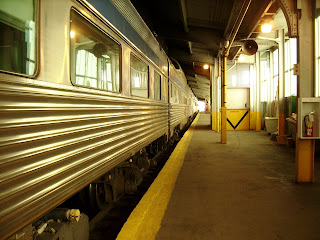 We actually arrived into the city an hour earlier than scheduled. Now I know how the trains manage to run on time, they simply run early all the time and then if there are problems, the time is there for them to use. Its funny, because thats how most people run their own time schedules as well. You arrive to work 15 minutes early, just in case there is traffic or construction on the way in, or you forget your phone and have to double back or something.

I remember taking a commercial flight once and I had to make a tight connection at one stop. I ran through the terminal and made it to my gate a full ten minutes before before the " must-be-there-by " time and the gate agent told me, " that was close, we were just about to leave....we're early! ". She smiled as she told me they were going to leave the gate .....early..... Late, I get.... Early??...What if I missed that flight, how would they justify it that they left someone behind in order to leave early?? But then again, I bet their on-time-performance numbers are great, even if the captain forgot to grab a coffee before pushing back, he could always double back..haha.

So, we arrived in the city an hour early, but they announced that they couldn't let us off the train as the station staff hadn't arrived yet. No worries, I had six hours or so to kill and wasn't in a rush to go anywhere. I wandered over to the dome car and reads for awhile.

A couple times the car attendant ( Steward? Porter? Conductor? ) came in and let me know it would be a bit yet and they would announce it when we were free to get off the train. I kept one eye out the window and figured if I saw people walking by, that would be my cue. A good hour and a half went by before I got bored of my book and wanted to go on the hunt for some food. I wandered around the train for a bit and settled back in my seat to wait. A Steward came by and asked me if I was just going to stay on the train... apparently, they had authorized de-training a good half hour ago and no announcement...haha. Oh well.

I had been emailing with a guy who ran a parachute outfit in a nearby town. ( known as a Drop Zone ) and he had invited me to pop in and see him on my way home. He had mentioned he would be in the office a couple days after my planned trip and would I be able to see him then?

I replied that I wouldn't be able to, unless I laid over in the city for a few days or otherwise made significant changes to my travel schedule. Would he be able to see me on XX date, instead??

By the time I packed up and left, he hadn't replied, so I kind of wrote it off. My connection in the city would have been tight to grab a rental car, drive out to see him and make it back in time for my flight that afternoon. By the time I got off the train and got my bags in order and found a place to stow them for the day and got some much needed food, I decided that even if he was there, it was just going to be too much stress and potential for problems to go running around on the off-chance that there might be an opportunity for me for next summer. ( I'm still holding onto the faint hope that I can find something year-round if I keep at the hunt all winter... )

I got back home to find an email from him, he was sorry we weren't able to connect, but he had just hired a guy, who was being trained right now, and would help him cover off the rest of his season ( maybe another month or so ).

Another lesson for me I suppose... When it all comes down to it, I got kind of lazy and let this one slip by... Had I got my poop in a group and gone out there, it might have been a neat addition to the summer.

He did invite me to keep in touch over the winter and that he anticipated needing another pilot for next season as well.
Posted by 5400AirportRdSouth at 1:57 PM