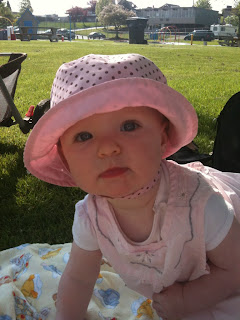 Fathers day today, first one for me as a new Dad. A little melancholy as I'm away from my baby girl and my Lovely Wife. My wife made a great little video for me with TWO wearing an I (Heart) Daddy shirt and we had a nice little chat this morning.

Also a little melancholy as my own Father passed away a few years ago and I'm sure he'd find my present situation entertaining as well. I was actually born not too far from where I am presently employed, up here in Canada's north. During the couple years before and after my birth, he made the trip up here to find work. He was most definitely of the "enlightened" generation, to put it delicately and I always thought it a strange place to go to find work back in the sixties and seventies. He ended up mostly driving a cab, but made at least one foray back here a few years after my birth to do it again and make some income. I guess cab driving paid fairly well back then, who knows. 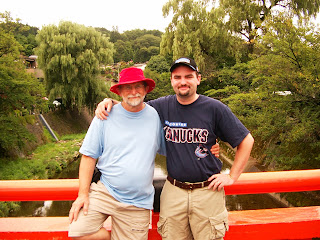 It was always an interesting conversation point when I was a kid, as to where I was born. Even though we moved away when I was only a few months old, I used to use my birthplace as a bit of a badge of uniqueness. Not so unique now, EVERYONE here is born where I was born...haha.

Was a day off for me as well, as it seems most sundays are around here. More because we dont have a lot of work on sundays than anything else.

First I thought I might go hit up the driving range and hit a bucket of balls. I realized its probably been almost two years since I swung a club. Not that I was any good to begin with, but I'm not going to get any better by not golfing. 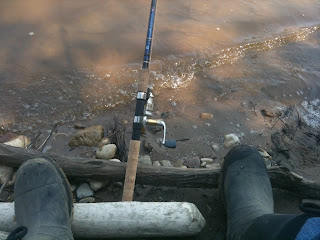 I enjoy golfing in much the same way as I do fishing. Its a reasonable excuse to get outside and enjoy the outdoors for a long period of time. If I simply walked back and forth in a park for three hours, people might think it a little odd, same as if I sat on a riverbank and stared at the water for three hours. Luckily, all I have to do is swing a club at a little tiny ball and then go looking for it in the bushes for three hours and people think thats entirely acceptable.

I did in fact, change my mind and went fishing instead. There are a ton of places around here to go fishing, but everyone keeps telling me to go to the same spot. Every time I've been to that spot as well, theres always four or five other people there as well. I've tried a few other spots, with limited success, but have always found good results at "the spot". Not a bad location either, just off the end of the runway. Got to watch the water tankers and bird dogs take off and land a couple times too. Oddly, downwind as well....( the plane in the picture is back-tracking and about to turn downwind for the takeoff. ) 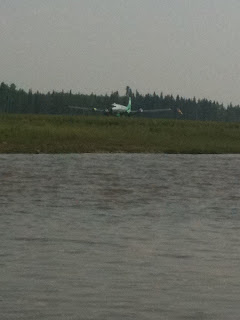 Apologies for the crap quality, its an iphone picture, at full zoom, but I was trying to get a shot with the windsock as well.

Actually, thats kind of funny too, I've met quite a few people over the years who misunderstand the whole taking-off-into-the-wind thing. Non-pilots of course and not an indication of their intelligence, but just kind of a funny assumption that your average person has about how an aircraft and a wing works.

For the non-pilots, we take off into wind as the wing of an aircraft does not give a hoot about the ground beneath it. To the wing, the ground does not exist. It exists only in its own medium, the air. The wing creates lift due to the airflow over it. How it gets that airflow, it also doesnt GARA where it comes from. You could design a giant hand to launch it, a-la paper airplane, you could lead it around by another aircraft that had an enormous fan mounted on it to blow air over its wings, or you could strap a couple engines to it and propel a large mass of air backwards creating a newtonian reaction of forward thrust. All of which are perfectly acceptable, only one of which is actually used, so far. ( there are other ways, like throwing kerosene into a tube with a little fan in it that spins at insane speeds and then light it on fire, but thats another story )

In any case, if an airplane is sitting stationary on the ground and a 10 mph wind is blowing on it ( from the front ), the wing thinks its moving through the air at 10 mph...becuase it is. Its not moving over the ground at 10mph, but remember, the wing doesn't care about the ground, its all about the air.

So, if your wing needs 100mph to generate enough lift to get the rest of the airplane off the ground, then you only need to generate 90 mph of forward motion with the engine(s) if you have a 10mph headwind. The opposite is true for a tailwind, you will need to go 110 mph (on the ground )to get that same 100mph relative airflow over the wing.

This all changes once you are actually in the air, but thats another story too.

In any case, I watched, curious, as the giant aircraft took off, with a tailwind. I think they were on a training flight as they returned pretty quickly, so who knows, maybe there was an operational reason.

It could also be that the tail wind was of little concern to them versus other concerns. Occasionally you might take off downwind as there are obstacles on the into wind end of the runway. Or noise-sensitive areas, or traffic considerations, or any number of other reasons that might necessitate a decision to take off downwind. Particularly if the wind was a minor wind to begin with. Not judging, just noted with curiosity at the time.

I remember too at one point when I first started flying, and noting that the winds aloft can be routinely 40 Kmh at even low altitudes, why do those little fluffy clouds not get ripped apart by the howling windstorm going on up there?? Why do they float along and rarely seem disturbed by all this commotion?

It was explained to me once and it always stuck with me. If you are floating down a river in a Canoe, just hanging out and having a cold beverage, letting the current whip you downstream at 10 mph, its not too crazy. If you look at the shore, its really cruising by, but if you ( irresponsibly, shame on you ) throw your cold beverage can in the river, it will float alongside you peaceful as can be. Like the wing, it GARA what the ground ( shore ) is doing ,while it is in its own medium, doing its own thing. Its all relative.

Did some emergency procedure and single-engine maneuvering training in the push/pull yesterday as well. With one engine out, its actually quite a nice little plane to handle.

Unlike the conventional twin, there is no yaw or controllability issue, only a loss of power. In fact, it can be tricky to determine which engine has done the failing...

In a conventional twin, its usually fairly obvious, the nose is pulling hard to one side and you have to actively work at it to keep it straight with the rudder. The lack of activity on one foot/rudder pedal tells you that is is the side generating zero-thrust. Dead Foot = Dead Engine.

You can check the engine instruments in a conventional twin and they will give you some indication, but they can be a little too subtle. Since the engine is still turning,( because the propeller is spinning in the relative airflow ), the oil pressure might still be up ( ish ) and the engine is still fulfilling its duties as an air pump, so the manifold pressure will not change very much, the alternator might still be generating some electricity, the vacuum pump might still be pumping vacuum. But the prop isn't generating thrust, its actually generating drag, using that relative air to turn the engine. And turning that dead engine is a lot of work. Work that your good engine is now doing and you'd rather dedicate to other tasks, like keeping you in the air.

On the push/pull, since there is no adverse yaw ( that pulling-to-one-side ), the best indicators are the fuel flow gauge and the propeller RPM. The fuel flow gauge is the better of the two as a failed engine eats no fuel, so one engine will register zero fuel flow. ( I know, I'm glossing over partial-power-loss, bear with me )The RPM gauge will still indicate something as the propeller is still spinning, but it should be less than the operating engine. In our training, it was about 300 RPM lower, which isn't much and requires a concerted "look" at the gauge, a glance could easily miss the difference.

That wrapped up my training flights on this aircraft as well, next stop is PPC ride and then I can fly passengers for hire. All I have to do is pass...
Posted by 5400AirportRdSouth at 8:33 PM