F is for Filming 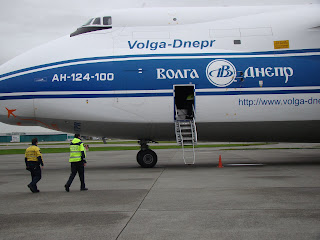 Occasionally the FBO where I work is used as a movie set. This week it was some US television series I had never heard of, but based on the amount of equipment they brought, it is obviously a big deal.

My favourite piece of kit they bring is the catering truck.

The Lovely Wife introduced me years ago to the Catering Caper and I've enjoyed it ever since. The fact is most movie shoots are comprised of many different contractors, all brought together to do their little part of the big picture. One of these contractors is the Caterer. The Caterer is simply tasked with feeding everyone on set, ie all the different contractors, actors, etc. The beauty is, they have no idea who is who and if you are packing a walkie-talkie, a clipboard and/or a reflective vest and make your way to the food area, chances are, you're getting fed.

The food was good.

( PS - I think I blogged about this before, but can't remember and am too lazy to look. Sometimes I find I have done this and can't help but think I am gravitating towards being THAT guy.. the one who has run out of interesting stories and starts repeating himself.... )


F is for Fire

Not something you'll find airside..hopefully... but definitely something we have to prepare for and take measures against. We used to wear Fire Retardant uniforms but sometime last year they decided that wasn't necessary anymore. Not sure what the justification was or if it as a simple cost/risk analysis, but there it is. We take Fire Extinguisher training every year and have no less than three extinguishers on each truck, one in the cab and two big ones on the back of the truck as well. We've also got a big 200 Pounder on wheels in front of the building in case of an aircraft fire. It kind of looks funny as it has great big wagon-wheel style wheels on it..

Most of the staff is of a similar mindset when it comes to this bad boy. That is, if there is ever a fire big enough that it is needed, chances are, we will have long since run away anyhow. I suppose if there were people trapped in a plane or something, it would change things somewhat.

A few years ago, the Avgas truck at one of our competitors had a mechanical malfunction while it was idling on their ramp and ended up catching fire. The fire started in the cab and they tried to fight it with hand-held extinguishers while it was small enough, but eventually, they ran away as well.

I'm told it took over 30 minutes for the local ARFF trrucks to show up, which, frankly, I have a hard time believing. But I'm curious if they would have run away as well. I wouldn't go anywhere near a burning Avgas truck. No way, No how. Turns out, the truck burned to the ground, with the tank and its flammable contents intact.

Luckily, 99% of our fuel sales are Jet Fuel. Jet fuel is very similar to Diesel and is very difficult to ignite. Similar to gasoline, the fluid form of jet fuel is actually not "flammable". You can throw lit matches into a puddle of jet fuel all day and not worry about it. Both gasoline and jet fuel need to be in vapour form in order to be lit by an open flame. In a liquid form, there simply isn't a combustible mixture, lots of fuel, a source of heat, but not enough oxygen to make it work. The mixture is simply too "rich". Add some heat, say from hot tarmac or a hot engine part and the fuel will start evaporating, turning into a vapour and mixing with the air.

Now we have a mixture that WILL ignite with an open flame. Gasoline will evaporate and create flammable vapours at practically room temperature. Jet fuel, needs to be much, much hotter to create a mixture that will burn. The temperature at which a fuel will create flammable evaporative vapours is known as its flashpoint. A puddle of gasoline on a hot ramp, will have a layer of highly flammable vapours coming off it, that you can even see on a hot day. Jet fuel won't.

Further to Jet fuel being relatively stable, a very large percentage of our deliveries into-plane are done in a closed system. The single-point nozzles are designed to deliver fuel without exposing it to the air ( or the fueler ) and any opportunity for unintentional evaporation.


F is for Frustration

Started working on my Multi-IFR over two months ago and at this rate, 2013 is looking pretty good for completion. Unless it happens to rain next winter...at all. I can only dedicate my two weekend days to flying and my instructor has my other day off, monday, as his fixed day off as well. The plane was down for mechanical repairs for almost three weeks in December and my instructor has also taken a three week vacation over the holidays. I'm starting to think that the goal of getting the entire MIFR done on a part-time basis between now and April might not be realistic. I'm already starting to consider only finishing the multi portion and maybe looking for another seasonal job for the summer.

Between TLW's mat leave and renting out our place for the summer, we could probably swing a summer away if I could find something worth going for. Accommodations are probably going to be the single largest deciding factor though. I'd also have to get approval for another leave of absence from my current employer as we'd be back in the fall.

It would be a lot nicer to finish the MIFR and actually be able to move somewhere semi-permanently, even if it meant working on the ground for a little while longer.


F is for Freighter, Foreign 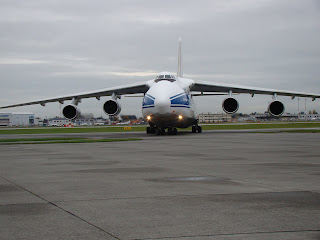 This occurred a few months ago, but I don't think I ever got around to posting the pics or details. One of our local Helicopter outfits was shipping a couple of Super Puma helicopters over to Afghanistan, and they chartered an Antonov 124 freighter to come in and pick them up. 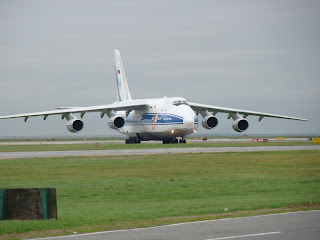 The helicopters were staged on our ramp for a couple days while they worked on getting them ready for shipping. Mostly this involved taking the blades off and crating them up, not sure what else they did as both birds looked pretty ready-to-go once they got their blades back.

We were tasked with baby-sitting the workers as they came and went from the disassembly area as most of them did not have airside access passes and needed to be escorted to and fro with Block Passes. The local airport authority sent out three little security cars as well to set up a little perimeter around the work are and make sure no one wandered off down the taxiway.

The security guys come out for the movie shoots as well, and essentially they take a chunk of airside ramp and turn it into a non-restricted area so that all the (well fed ) workers can come and go without too much trouble.

I also got called in for an extra shift on the weekend that the AN-124 came in to help tow the helicopters over to the other side of the field where the freighter would be parking and be there to help the crew if they needed our services. 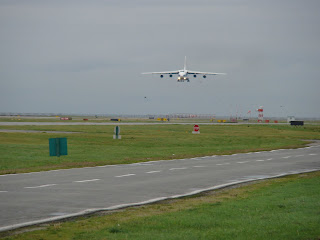 Our ramp isn't quite big enough to handle an AN124, so we used the Air Canada ramp instead.

Day of, and the freight forwarder ( Panalpina ) sent out their Heli-Logistics guy to come and oversee the whole deal. I've done a few project jobs like this and it is usually fun. If everything is well organized and planned out in advance, the forwarder is just a third wheel, but the minute something goes wrong, guess who everyone turns to, looking for Plan B?

Me and the other guy who were going to do the tow decided we'd have one guy on the tug and another taking up lead in one of the vans. The vans have much better radios ( and you don't have to compete with the tugs engine to hear them ) and we had quite a few people who wanted to ride-along.

The other guy has done a lot more towing than me, and doesn't like talking to Ground Control, so he took the tug and I took lead in the Van. Most of the towing I do is with the Lektro, a special vehicle designed for towing aircraft by lifting the nosewheel off the ground. Frankly, its kind of cheating it's so easy. You can still get in trouble if you don't know what you're doing, but the fact that you steer through the aircrafts nosewheel instead of through a pintle hook and two points of attachment a la a tow bar, makes it laughably easier than towing with a tow bar. As these helicopters have a very low front end, we can't "scoop" them with the Lektro, so its tow-bar time..luckily not for me.

My usual towing jobs involve vey short distances on the field, mostly one or two taxiways at most and rarely across any active runways. This time I made sure I had a pen and paper ready for my taxi clearance from ground.

We got the helicopters in place and waited for the Antonov, wasn't hard to miss it on approach, the black smear of exhaust behind it was pretty obvious. 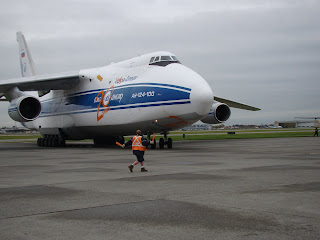 As it taxied in, we all noticed that the ground handling company that had been arranged was not there... They were supposed to be there with marshallers and a ground power unit. Just as I took the spare wands out of the van and prepared to marshal him in myself, one guy in a pickup showed up. The arrival schedule had changed at least three times over the past week and I guess no one had notified them. I was kind of disappointed as it would have been my first time marshalling one of these, but glad at the same time as it was pretty tight.