I'm not sure if I like the term, but it does seem a little appropriate given the nature of some of the decadence and excess in the last ten years or so, and the fact that we seem to be paying for it now....

Anyhow, onward, upward. Things will be what they will be, not much sense in dwelling on things...

Got the itch to go flying the other day, and finally decided I better do some scratching. Its been a few months since I've had the controls of an aircraft. The holiday season was pretty good to us financially, with myself getting a nice little cheque pre-christmas for some retro pay due for an old pay increase that got missed, a signing bonus on our new union contract and another healthy pay increase for Jan 01 under the new contract.

Most of the extra money went to paying bills, but I managed to get my hands on 135 bucks to go and rent an ultralight from the local ultralight strip and go for a boot. 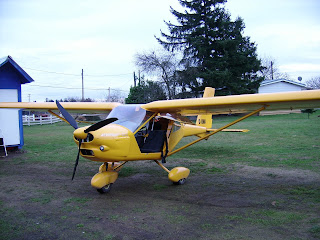 I could have spent a couple more bucks and rented a 172 or a 152, but the ultralight place had just added a couple new planes to the fleet and I wanted to give one a try. I went for a flight in one a year or so ago and didn't really care too much for it. It felt really squirrelly and difficult to fly a steady course or get the aircraft trimmed out properly. The aircraft I took up this time though was awesome!

It was a little Ukrainian made job ( insert appropriate ukie joke here ), and the name escapes me, but I promise to find out and post it.

I went up with one of their instructors, as I'd never rented from them before and a check-out was in order before they will let me loose on just my say-so of my awesome pilot-y type skills. 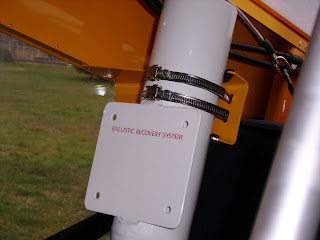 A neat feature of the plane, it had a Ballistic Recovery System! This is a parachute, for the plane! According to the owner, this is a big wife-seller on the poeple who come in with the typical cocked eyebrow when hubby says he is going to try flight training in an ultralight. If you get in serious trouble, as a last resort, you can pull the handle and a chute will fire out the top of the plane, and bring it to a controlled vertical descent. I'm told most of these systems allow for landing at vertical velocities equivalent to a ten-foot drop. Enough to rattle your fillings to be sure, and bend the airplane without doubt, but possibly a better outcome than other possibilities, depending on the scenario.

I've also heard that these systems are getting a little bit of a bad rap, given their activation in scenarios where it wasn't at last-resort yet and cooler heads didn't prevail. Hard to say, but its nice to have one more tool as a backup.

We ended up leaving fairly late in the day, with our legal daylight dwindling and twilight encroaching. We were legal, but its not hard to be in legal " day " and still have it quite dark out.

Over to one of the local airports for some touch and go's, got to practice my slips and slipping turns as I had a tough time judging power settings for my approach with an aircraft I wasnt familiar with. I like slipping too, and the goal of the day was to just have some fun.

For those not familiar, a slip is used on approach where you are too high ( didnt take enough power off during the approach, or took it off too late ) and power is fully off. If you lower the nose and " dive " at the runway, you will pick up speed. Excessive speed is not going to help you at all, as you will have to then bleed this speed off over the runway before the aircraft will stop flying and let you land it. You may well get to the runway by diving at it, but you will still land waaaaay down the runway while you " float " along in ground effect trying to get rid of all that extra speed.

So, the slip is used by giving full rudder in one direction ( turning the nose of the plane away from the runway ) and using the ailerons to keep the aircraft pointed towards the runway. This ends up making the aircraft sort of fly sideways, presenting a large section of the fuselage into the relative airflow and creating a large amount of drag. The drag slows the aircraft down considerably, allowing speed to drop. If the speed is dropping, the nose can be lowered towards the runway ( it will actually descend quite quickly without the nose really dropping at all ) and you can then " dive " at it without penalty of increasing your speed. This is a simplified explanation, but the end result is a significant rate of descent without an increase in speed. I love the feeling of a slip properly applied and the bottom dropping out from underneath you.

I've had instructors warn against doing this with nervous passengers as they may not enjoy this sensation...

The trick too is to make sure you have straightened the aircraft out nice and smoothly to transition to a normal ( straight, aligned with the runway ) attitude prior to landing.

After a few circuits, we flew over to the practice area to try out a few upper air maneuvers. This thing stalls at 29 MPH...haha! The indicated airspeed approaching the stall dropped off to almost zero before we felt anything. The stall was really gentle as well, no wing dropping or anything, just a little buffet. I actually waited a bit before I recovered as I didn't think it was fully stalled, but apparently it was.

A little slow flight to see if we could make it " stand still " and then hurry up and get home before it got too dark!

Coming back to the home strip, I let the instructor know that this was all him now.

Way too dark for me to comfortably find an unfamiliar, unlit, dark, muddy, short, strip. I told him later that had that been just me in the plane, he would have been getting a phone call from the field where we had done the touch and go's at, because thats where I would have left their airplane!

I also wouldn't have left that late, but I asked the instructor before we left if he was comfortable departing knowing what the light conditions would be like when we returned and he seemed quite confident.

When we called in on the Aerodrome Traffic Frquency ( ATF ), to announce our impending arrival and intentions, one of the other owners on the ground asked us if we wanted a car or two placed along the runway to light things up. We decided to have a look-see first and ended up seeing the strip nicely. It was neat too to see the casual and helpful nature of everyone out there at this strip. Everyone was just out there having fun and watching out for each other. Not a lot of the posturing and too-cool-for-school attitudes that your typical training aerodrome seems to suffer a lot of these days.

The aircraft had tons of power ( relatively, of course ) and it felt very stable in the air. I was quite impressed. It cruised at around 90kts as well, not too shabby!

Comfortable, roomy two-seat cockpit. It even had a " real " throttle setup, which you gripped with your palm on the centre console, instead of the awkwardly placed and goofy-feeling Cessna throttle which is the plunger type, mounted up on the panel. I like to hold the throttle while I fly, and this made it very comfortable, almost like resting your hand on the gear-shift. 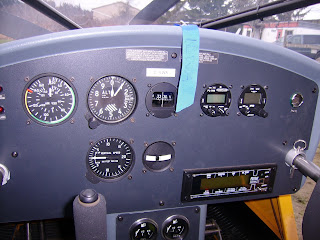 One thing I didnt like though, was the combination display for the engine instruments. Everything was digital, with no needles, green arcs, red lines or other visual cues to help with monitoring engine performance. I suppose if I flew this thing on a regular basis, I'd have the nominal values memorized, but its nice to not have to really read the values and simply glance at the needle and the red line to make sure things are doing what they are supposed to be doing.

I understand though that with ultralights, there are quite a few compromises that have to be made in non-critical areas to keep the weight down.

Here's a picture showing a cessna throttle ( the black knob ). 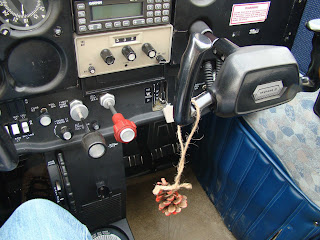 Also visible is my nephews creation which I promised him I would take with me when I go flying. I sent him a couple pictures on one flight, and I need to remind myself to send him some soon so he is reassured that it still goes with me to help land the plane!

It didn't hurt that the aircraft has less than a hundred hours on it as well. Most of the Cessnas I'm used to flying had in excess of 5000 hours...

I'm looking forward to going back to scratch the itch and am wondering what the local instructing employment scene is like for the ultralight guys... 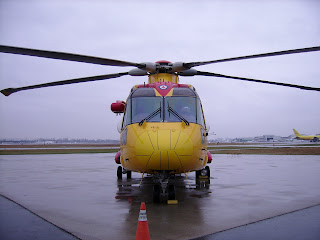 Had a Canadian Forces Cormorant helicopter visit us the other day. On a training exercise and lunch break. I love how these guys " land " on the runway and then taxi over. Its always a little weird to see a helicopter cruising down the taxi way instead of landing directly on the pads. We actually had quite a few do that when we had all that fog last week. 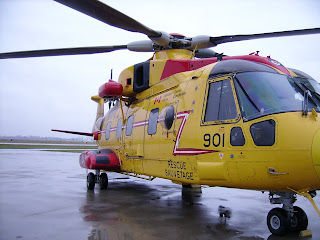 I'm assuming that helicopters would follow the same instrument approach procedures to a runway and then " circle to land " at their intended pad once the airport environment is in sight? 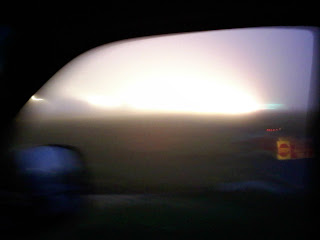 In the case of the fog, I presume they followed the ILS all the way down and since the airport environment wasn't visible, most likely runway lighting only, they had to land on the runway and taxi off?
Posted by 5400AirportRdSouth at 11:16 AM