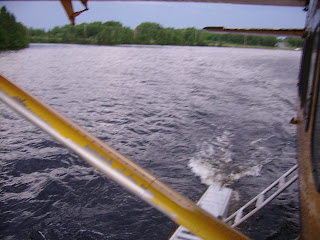 I think I survived an evening at the beer gardens at our local summer festival.

My hangover took one full day of bed-rest plus another day of moping around with a headache.

I always remember the next day why exactly it is that I don't drink to excess anymore. I suppose its a bit of a tradition around here though, so when in Rome...

I went through my camera to see what I had to post this week and found this one. 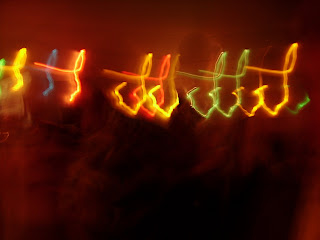 It pretty much sums up the latter part of my evening at the beer gardens.

As in.... vague details, blurry images and spending a good deal of the time not quite knowing what was going on.

I don't remember taking any pictures, and I have absolutely no idea what is going on in this one. It kind of looks like a double exposure that you get with a 35mm camera, but this is digital. I think it is just the result of taking a picture, in the dark, with the flash off, and an extremely unsteady hand. What I was taking a picture of, I have no idea. I think I see someones face on the left side, but it looks like people dancing in the background on the middle right. 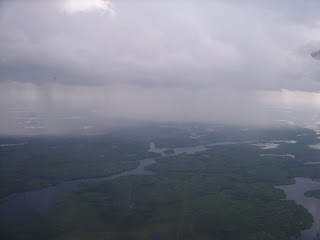 I did take a little video of a fly-past we did, over the town, on our last flight of the day before we shut it down and headed into town for the festivities.

Please excuse the dirty windshield, we had a little oil issue, it looks worse than it is.


The weather here for the last week has been absolutely horrible. We just keep getting one low pressure system after another. They roar across the prairies, leaving thunderstorms in the unsettled air behind them and pushing huge bands of rain and cloud ahead of the warm front side. Except, when they get to us they seem to pick this spot to finish occluding and die right above us. We aren't getting a lot of the intense thunderstorms or heavy rains that occur while the system is at full strength, but we are getting the clouds and showers it leaves in its aftermath, sitting right on top of us for days at a time. 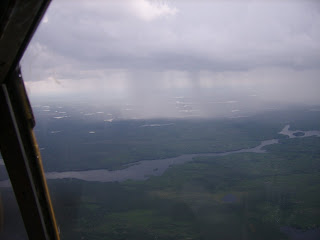 We did get a few thunderstorms, which is kind of nice for me. As long as we don't have to fly in it, it makes for a great show. A show we don't get to see very often on the west coast. 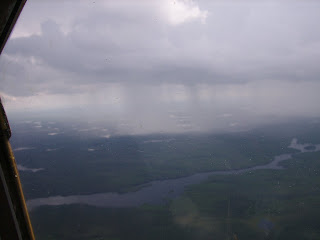 One night we had a lightning storm that was pretty intense. The sky was lit up like a strobe light that kept going off. I had to get up out of bed and go outside to watch it for awhile. I tried to video it, but with less than satisfying results. Of course the intensity and frequency of the lightning died off the minute I started shooting video. At one point, the thunder was so continuous that it was just a dull rumbling, with no start or finish.


The lightning was cool too, as it wasn't hitting the ground, it was arcing across the sky. Sometimes spreading out in multiple forks like fingers as they raced across the clouds. I've never seen lightning like that before, I suppose it was sheet lightning?

Not much chance of the lightning setting off too many forest fires, everything up here is absolutely drenched.

We had a group scheduled to fly out of here today, but they ran into trouble at the border and they wont be arriving apparently. Bummer for them, that has to suck.

We were going to fly them out and then go over to another camp and cut some trees down and skin them to make poles for a new boat dock. The skinning has been described as a bit of a nasty job. These are pine trees that we will be using and they have a lot of sap under their bark. The trees get cut down and the branches cut off with the chainsaw. Then, they bark is removed with a pull-knife. The knife looks kind of like a flat blade with a handle on each end, so you can " pull " it down the tree and get the bark started to peel off. The sap of course gets all over you and your hands. I'm not a big fan of tree sap, the only way to get it off is to wash it with gasoline apparently, even then I'm not too sure.

Since their are no guests to fly out though, we're going to save this job for another day when we can combine it with a revenue trip. So, not much to do today. Too wet to do much around the base as far as maintenance.

It came to me the other day... We're holding out for ONE MONTH of summer? argh.
Posted by 5400AirportRdSouth at 1:30 PM