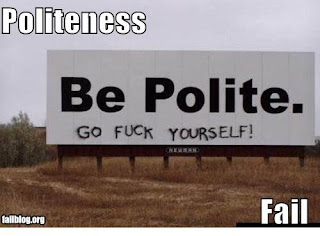 One of the things I'm really looking forward to this summer, is not driving. My daily commute right now is in the order of 30-45 minutes each way, depending on traffic. Not too bad considering I know people who do an hour or more each way, in much worse traffic then me. I actually cover a fair bit of distance in those minutes, and that's what keeps me sane. If it was bumper-to-bumper bridge lineups or freeway crawling, It would be much harder to handle. As it is, I fly along pretty good, and rarely in peak hours.
Problem is... I fly along.... I tend to speed a little. I also tend to get irritated at drivers who exhibit poor driving skills. Badly timed lane changes, overly-aggressive driving, tailgating, cell phone yakking and parade marshals who sit in the passing lane and keep pace with a car in the slow lane and clog up the freeway like an artery full of KFC.
These things don't help my mental health.  All the stress and tension I generate being so wrapped up in what others are doing, as well as my own poor judgement sometimes when it comes to speed.
I've tried to relax a little more....I've tried turning off the radio. I've tried reciting emergency checklists to distract myself, I've even tried classical music. None of these really helped much or for very long. Soon enough I was back to yelling at my fellow drivers and racking up speeding tickets.
But I found made a new little game that seems to be working a little bit, for now anyways.
I call it Three Good Things.
The objective, is to do Three Good Things on the drive to or from work. A good thing could be slowing down to allow someone who I think is going to be changing lanes soon ( they just haven't figured it out themselves just yet.. ) room to get in, so they don't panic when they finally realize their lane is ending. Or just setting the cruise control at a socially acceptable pace and driving one or more legs at a slower than usual speed.
Its actually harder than it seems, and I've been having some fun with it, actually trying to find three good things to do in a drive. Its a start anyways...at least I've acknowledged the issue.
I remember living and driving in a small town previously. I had an extra ignition key for my car cut, just so I could leave it in the ignition. That way I never had to worry about toting around my keys...the door to the house was never locked and the car always had the key in it and the doors unlocked. Perfect!  Got easy too, if one of my friends needed to borrow my car while I was away.
Driving down the street in a small town you never drove with your hands at ten and two, always one hand on the top of the steering wheel, at 12 o clock. that way when some passed you that you knew and they waved at you, it was quick and easy to simply raise your fingers, leaving your palm on the wheel. And believe me, there was a lot of waving. In a Town of around 6000, it seemed like every second car was someone you knew. Jill from Safeway, Fred from the bank, John who works at the insurance place.
So yeah, looking forward to small town life again soon. 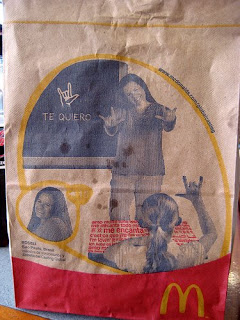 Oh.. I ate at MacDonald's tonight... I know.. I know! But the Lovely wife went to bed early and I was off late, so I didn't want to bang around and wake her up, so it had to be fast food... That's my excuse.
Anyways, I just noticed the bag, see above.
Kind of made me snicker. I know it means something else in sign language but to me.... that little girl is ROCKIN OUT!
Oh, and I saw an Aerostar today, a small twin engine piston aircraft and learned that they have hydraulic nosewheel steering. That surprised me that a small plane like that would need any type of nose wheel steering power-assist at all.
Posted by 5400AirportRdSouth at 12:16 AM